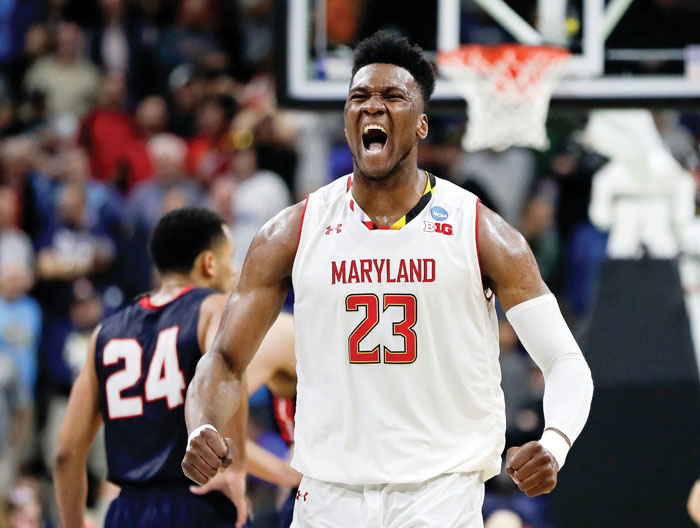 Maryland 's Bruno Fernando (23) celebrates during the final moments of the second half of a first round men's college basketball game against Belmont in the NCAA Tournament in Jacksonville, Fla., Thursday, March 21, 2019. (AP Photo/John Raoux)

HARTFORD, Conn. (AP) — The defending national champions are moving on in the NCAA Tournament.

Phil Booth scored 20 points, fellow senior Eric Paschell added 14 and No. 6 seed Villanova held off Saint Mary’s 61-57 in the first round of the South Region.

Jordan Ford and Malik Fitts each had 13 points for Saint Mary’s (22-12), which never trailed by more than eight.

The 11th-seeded Gaels, who pulled off an upset win over Gonzaga in the West Coast Conference Tournament, had a chance down the stretch in this one.

Ford’s basket in the lane after a few nifty moves got the Gaels within six points at 61-55 with 34 seconds left. After Paschell missed a foul shot on the other end, Fitts cut the deficit to four points with a leaner in the lane.

SALT LAKE CITY (AP) — One year after dreamers and underdog lovers rejoiced at top-seeded Virginia’s first-of-its-kind, first-round loss, the Gonzaga Bulldogs crushed any thought of a repeat with a wire-to-wire thumping of Fairleigh Dickinson in the West Region.

Rui Hachimura led the Zags (31-3) with 21 points and eight rebounds.

By the time Gonzaga turned it over when Josh Perkins tried flipping a no-look pass backward to Killian Tillie, coach Mark Few looked barely awake, sitting in his chair, cheek cupped in his hand. The Bulldogs led 70-34.

The Knights (21-14) were unable to repeat their amazing shooting three nights earlier in a come-from-behind win over Prairie View A&amp;M in the First Four.

Fairleigh Dickinson shot 30 percent and went 6 for 21 from 3-point range. Its star from the win, Darnell Edge, had trouble getting any looks, let alone good ones. He went 2 for 11 for seven points.

DES MOINES, Iowa (AP) — Kevarrius Hayes scored 16 points, Jalen Hudson added 15 and 10th-seeded Florida beat Nevada in the West Region in the first round of the NCAA Tournament after squandering most of an 18-point lead.

Andrew Nembhard, whose last-second shot beat LSU in the Southeastern Conference Tournament last week, drove to the basket for a layup with 1½ minutes left and Florida scored the last seven points after the Wolf Pack had cut the lead to two points.

The Gators (20-1) won their tournament opener for the third straight year and became the third double-digit seed to win on Thursday.

Cody Martin scored 23 points and twin brother Caleb Martin had 19 for the Wolf Pack (29-5). The two combined for 28 of their team’s 33 points in the second half.

KeVaughn Allen made back-to-back shots to start a 12-0 run early in the second half that swelled the lead to 51-33 with 14 minutes left.

JACKSONVILLE, Fla. (AP) — Keldon Johnson scored 25 points in a huge mismatch that was over by halftime, and second-seeded Kentucky romped in the Midwest Regional over NCAA Tournament newcomer Abilene Christian.

The Wildcats shot 60 percent in the opening period, held Abilene Christian to 5 of 26 from the field and went to the locker room with a 39-13 lead.

Even without PJ Washington, who sprained his left foot in the Southeastern Conference Tournament, the Wildcats had far too many weapons for the Southland Conference representative, a No. 15 seed. Reid Travis added 18 points and Tyler Herro 14.

Jaren Lewis led Abilene Christian with 17 points, the only player in double figures.

The big question: Will Washington be able to go? Kentucky coach John Calipari tweeted before the game that a foot specialist confirmed the injury was only a sprain, not a fracture.

JACKSONVILLE, Fla. (AP) — Maryland’s Darryl Morsell made a crucial defensive stop as Belmont went for a last-second upset in the NCAA Tournament, allowing the Terrapins to escape in the East Regional.

The mid-major powerhouse from Nashville, Tennessee couldn’t knock off the No. 6-seeded Terrapins (23-10) from the Big Ten, despite a 35-point performance by Dylan Windler.

Maryland was clinging to a one-point lead and the shot clock was off as Belmont (26-6) had a chance to win it at the buzzer. The Bruins didn’t bother calling a timeout to set up a play; they knew what they wanted to do — a backdoor pass to Windler. But Morsell anticipated the pass and stepped in front of Windler to pick intercept the pass while the Belmont star tumbled to the court.

Morsell was fouled with 2.5 seconds to go, sending him to the foul line for two shots. He made the first and missed the second, and Windler heaved an unsuccessful desperation shot from midcourt.

Belmont led by as many as 12 points in the first half and went to the break with a 40-34 lead.

DES MOINES, Iowa (AP) — Minnesota won its first NCAA Tournament game in six years behind 24 points from freshman Gale Kalscheur as the 10th-seeded Gophers rolled past Louisville in the opening round of the East Region.

It was the first tournament win in Richard Pitino’s six seasons coaching the Gophers and came against the school that fired his father, Rick Pitino, in 2017.

Jordan Murphy and Amir Coffey each had 18 points for Minnesota (22-13), which knocked down 11 3s despite entering play ranked 344th nationally in made 3s per game.

Kalscheur’s layup early in the second half gave Minnesota its first double-digit lead, 43-33, and Murphy’s layup made it a 50-38 game with 16:06 left.

The Cardinals went to a full-court press in an effort to slow the surging Gophers. But that just left Kalscheur open from the same spot on back-to-back possessions, and he drilled two 3s to give Minnesota a 59-43 lead.

The seventh-seeded Cardinals (20-14) did cut it to seven late, but Christen Cunningham missed an open 3 that could’ve made things interesting down the stretch.

SALT LAKE CITY (AP) — After a teammate passed up an open layup that could have tied the game, New Mexico State’s Terrell Brown was fouled behind the arc and missed two of three free throws as the Aggies dropped a heartbreaker to fifth-seeded Auburn in the Midwest Region.

The Aggies (30-5) were trailing 78-76 when guard A.J. Harris had his defender beat and looked to be headed to the glass for the tying bucket. He instead lobbed out to Brown, who was spotted up at the elbow for a possible game-winner. Brown missed but was fouled with 1.1 seconds left.

With Auburn’s J’von McCormick grabbing his throat as Harris toed the line, Brown missed the first, made the second, then watched the third one rim out.

Auburn (27-9) knocked the ball out of bounds on the rebound and New Mexico State had one more good look, but Trevelin Queen’s 3 at the buzzer was an air ball.

Xavier Tillman had 16 points with 11 boards for the Spartans (29-6), who’ll face Big Ten rival, 10th-seeded Minnesota, on Saturday in search of their first trip to the Sweet Sixteen in four years. Michigan State throttled the Gophers 79-55 in East Lansing back on Feb. 9.

Bradley gave the Big Ten champions all they could handle, though.

It was a one-possession game until Matt McQuaid drilled a crucial 3 to put Michigan State ahead 61-55 with 3:31 left. Aaron Henry followed with a layup to cap a 9-0 run, but Darrell Brown hit a 3 for Bradley to make it 65-60.

The Spartans iced the game at the line, where they hit their first 20 and finished 25 of 26.

Mays scored 19 points but sealed the game from the foul line, and the Tigers (27-6) needed each one of his free throws.

Yale (22-8) hit four 3-pointers in the final minute and whittled an 18-point deficit to three in the closing seconds. With the lead on the line, Mays calmly stepped to the line and sank all his free throws.

Tremont Waters finished with 15 points, but had just two after the break for LSU. He was 0 for 7 from the field in the final 20 minutes after dominating the first half with 13 points and six assists. Naz Reid had 14 points and 10 rebounds. Kavell Bigby-Williams also had a double-double with 10 points and 10 boards.

LSU moves on without coach Will Wade, who is suspended for his role in an alleged cheating scandal. University officials won’t allow Wade to resume his duties unless he speaks with the school about an FBI wiretap that resulted in his suspension. Tony Benford continued in his role as interim coach.

Alex Copeland led Yale with 24 points. He had 16 points in the second half and hit two 3s in the final minute.

SALT LAKE CITY (AP) — Dedric Lawson had 25 points and 11 rebounds, and fourth-seeded Kansas dominated inside in a rout over Northeastern in the Midwest Region.

The fourth-seeded Jayhawks (26-9) had a notable size advantage inside and used it, outscoring the Huskies 50-16 in the paint while grabbing 17 more rebounds.

Kansas shot 56 percent and advanced to Saturday’s second round against fifth-seeded Auburn.

The best shot for the 13th-seeded Huskies (23-11) was to make their 3-point tries. They didn’t. The Colonial Athletic Association champions went 6 for 28 from the arc after finishing the regular season 17th in Division I at 38.6 percent.

Sharpshooter Vasa Pusica had a hard time getting separation from the Jayhawks’ athletic guards, finishing with seven points on 2-of-11 shooting. Jordan Roland had 12 points to lead the Huskies, who shot 28 percent overall.