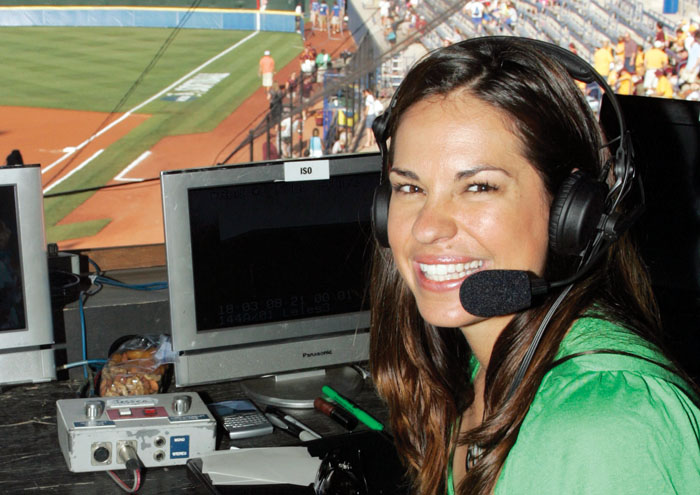 FILE - In this May 29, 2009, file photo, USA softball player Jessica Mendoza poses for a photo in the ESPN broadcast booth at the Women's College World Series in Oklahoma City. Mendoza is not worried that wearing two hats will lead to less inside info for her two ears, that she can manage her job as an ESPN analyst and her new role as a New York Mets baseball operations adviser. In an era when players and clubs treat the tiniest tidbit as a state secret, Mendoza thinks people haven’t divulged inside info to her as a media member. (AP Photo/File)

“OK, you work for the Mets, we can’t talk to you anymore,” she recalled hearing from teams during her spring training rounds, quickly adding “in a joking way.”

She’s not worried that wearing two hats will lead to less inside info for her two ears. In an era when players and clubs treat the tiniest tidbit as a state secret, Mendoza already felt teams were hesitant to provide her intelligence in her pundit role because they knew “information they would give me as a member from ESPN was about to go on air.” She doesn’t expect that to change with the new job title.

Rodriguez has been a New York Yankees adviser since his retirement, among several players to work as broadcasters while retaining a part-time role with a team.

“Alex’s commentary last year on a Yankee game was no different than if it was on any other game,” Gross said.

A member of the U.S. Olympic softball team in 2004 and 2008, Mendoza said new Mets general manager Brodie Van Wagenen first spoke with her about a position last August or September, when he still was co-ahead of the CAA Baseball agency and was preparing to interview with New York.

“I’m actually putting you in my presentation and I just wanted to get your OK with that, your thoughts,” she remembered him saying. “So we kind of started talking about it then, and from there, obviously, he got the job.”

Van Wagenen asked her at first whether she would move to New York to work for the Mets full-time, an entreaty Mendoza took as “a little joking.” The 38-year-old wanted to remain in California, where her kids go to school.

She views ESPN as her “full-bore priority.” Mendoza has spent one day working for the Mets since she was hired March 5.

Mendoza says she isn’t worried that Mets owner Fred Wilpon or chief operating officer Jeff Wilpon, the owner’s son, would be upset if she is critical. Mendoza promises to be just as reproving directly with team management.

“Part of my job is to kind of look, evaluate and knowing that, be honest. I’m an analyst first,” she said. “I would hope that that’s why they hired me, because of my honesty and criticism and not just to say all the right things.”

Reaction to the retirement of Japanese star Ichiro Suzuki