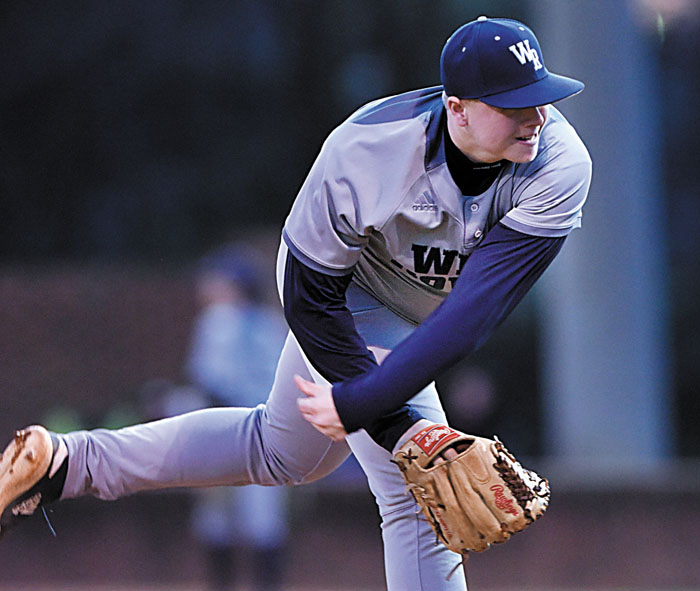 GRANITE QUARRY — We haven’t heard senior Daniel Durham’s name in a while, but it appears he shouldn’t be forgotten.

The West Rowan left-hander looked every bit like an ace Friday night at Staton Field, where he pitched the Falcons to a 9-2 NPC victory over East Rowan.

“He had a lot of runners on base but never got rattled,” winning coach Seth Graham said, moments after West (5-3, 1-1) avenged Tuesday’s 13-inning loss to East in the conference opener. “He just kept making pitches. He speeds them up and slows them down. And our guys play better defense behind him because they know he’s always going to be in the strike zone.”

Durham, a Catawba signee, was more of a laborer than a craftsman. Pairing a garden-variety fastball with a mesmerizing change-up and a looping curve, he worked six innings and yielded just one run. He allowed nine hits — including four to East senior Avery Shull — but struck out seven and issued only one walk.

“His curveball and change-up were the best I’ve seen all season,” said West catcher JT Fecteau. “They were never the same, so (East) couldn’t just sit on either pitch. He knew where every pitch was going, but they didn’t.”

Durham benefited from some timely hitting by the Falcons. They reached losing pitcher Corbin Durham — a junior right-hander — for three runs in the top of the first inning and three more in the third.

“He pitched three innings,” said East coach Brian Hightower. “One of them went well. In the third inning, when he hit two guys, I had to take him out.”

“It just felt good to come get a win after we let that one slip away in 13 innings,” said Daniel Durham. “It’s really hard to pitch when you’re down or tied or in a tight game. But getting that three-run lead right away, that just gave me more confidence.”

Daniel Sell and Jake Perez opened the game by coaxing walks from Corbin Durham. Daniel Durham’s one-out single to right drove home West’s first run and an outfield error delivered the next two. In the last of the first, the southpaw initiated the first of two West double plays when he speared Jake Hunter’s line drive back to the box and doubled Charlie Klingler off first base.

“I threw him a fastball right down the middle,” West’s Durham said, after snagging the wicked shot. “It was a mistake — I didn’t locate it very well. Then I just threw my glove up in self-defense and happened to catch it.”

“That’s a hard play to make,” Graham added. “It’s more of a reaction thing than anything. Then once he caught the ball, he threw it on the money to first. Daniel’s just a hard-nosed, in-your-face competitor.”

West bolstered its lead to 6-0 in the third. Steven Smith opened with a double up the berm in left field before Payne Stolsworth and Fecteau were hit with pitches — ending Corbin Durham’s night at 2 1/3 innings. Reliever J.D. Basinger’s first pitched skipped to the backstop for a one run. Two more crossed when Cade Bernhardt smashed a two-out single through shortstop Bryson Wagner and into left.

By the time this meeting was ajourned, there was only one player’s name to circle in red ink — Daniel Durham’s.

“I thought he did a good job throwing his curveball for strikes and his changeup down in the count,” praised Hightower. “We got a few hits, but when it came to scoring runs he’d buckle down. That’s how you pitch effectively with the lead. He did exactly what you want him to do — get outs and get you back in the dugout.”

NOTES: Daniel Durham’s ERA dropped to 2.14. … The Falcons carry a two-game winning streak into Tuesday’s NPC contest at South Iredell. … East’s Shull had three singles and a second-inning double to left-center. Mize went 2-for-4 and bumped his batting average to .231. … The Mustangs visit Carson on Tuesday.