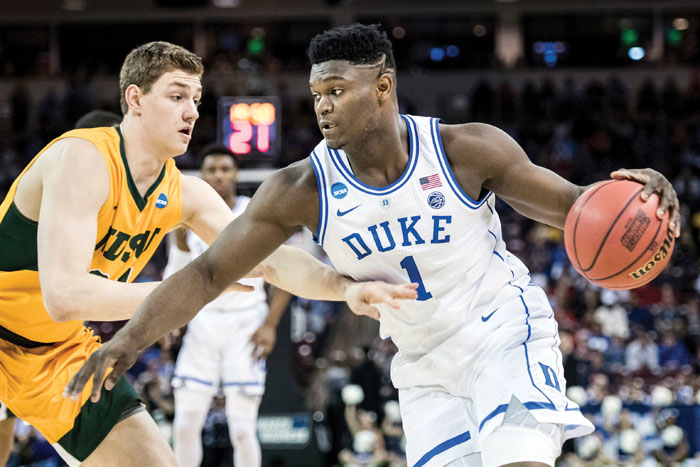 By PETE IACOBELLI AP Sports Writer
COLUMBIA, S.C. (AP) — Zion Williamson sat in his hotel room the night before his NCAA Tournament debut pondering his shot to play on the biggest stage in college basketball.
“Wow,” the 18-year old said, “I’m really here.”
With a CBS camera dedicated to his every move, the most prolific NCAA player had one of the strongest tournament debuts in memory. Williamson scored 25 points in an explosive performance to lead top-seeded Duke to an 85-62 win over North Dakota State in Friday night’s first round game.
RJ Barrett led Duke with 26 points and 14 rebounds and combined with Williamson for an unstoppable 1-2 freshman punch. But it was Williamson who could not be contained in the second half and he turned a tight early contest into a Duke runaway in the first round of the East Region.
Williamson was disappointed in the Blue Devil’s sluggish first half as Duke led just 31-27 at the break. Teammates were in his ear, he said, telling the star to “be me.”
When that happens, there’s no one else in college basketball like Williamson.
He opened the half by driving on two defenders for a layup that drew a foul. He missed the free throw but Williamson answered with a monster slam.
The highlight, though, came moments later on Williamson’s breathtaking dribble-behind-his-back-after-chasing-down-his-own-steal layup.
The 6-foot-7, 285-pound freshman outran 5-foot-11 190-pound Vinnie Shahid of North Dakota State for the ball after he tipped it for a steal. Williamson then dribbled behind his back, briefly losing and regaining his balance with a hand on the floor. That cleared room for Williamson to get to the lane and go up and under for a layup.
Just like that, the Blue Devils were up 40-27 and cruising. The Bison (19-16) never recovered.
“In the second half, we played beautiful basketball,” Duke coach Mike Krzyzewski said.
Barrett and Williamson gave Duke two players with 20 or more points in their NCAA Tournament debut for the first time since Mark Alarie and Johnny Dawkins did it in 1984.
Barrett said Duke, which starts four freshmen, may been overly excited about the NCAAs. When they settled down and began to play, Barrett said, things came easier.
The Blue Devils (31-5) will face either eighth-seeded VCU or No. 9 seed UCF on Sunday for a spot in the Sweet 16.
Shahid led the Bison with 20 points.
North Dakota State coach David Richman knew Duke had the potential for a back-breaking run that would put his team on its heels. Richman was as awed by Williamson as everyone else. “Probably one of the best athletes I’ve seen with my own eyes,” he said.
Still, Richman’s spunky team held a 25-24 lead late in the opening half. That was when the Blue Devils settled for too many jump shots, Krzyzewski said, giving North Dakota State the chance to hang around.
Once Williamson got going, Duke showed why it is the top overall seed in this tournament and why CBS is dedicated to following Williamson’s journey.
Duke was expected to pick up where it left off last week when it won its 21st Atlantic Coast Conference Tournament title. Williamson was electric in the conference tournament — he went 13 of 13 from the field in a quarterfinal win over Syracuse — and became the first freshman to win both ACC player of the year and tournament MVP.
Now on the big stage with the “Zion Cam” tracking his every move, Williamson was active early with a driving basket and a monster block on the other end.
Then a crazy thing happened — the Blue Devils struggled to score. They missed 3-pointers and close-in shots, mid-range jumpers and driving layups and found themselves trailing the Summit League Tournament champions 16-12 midway through the half.
Barrett and Reddish rallied Duke toward the end — Barrett had three straight baskets — and a Jordan Goldwire 3-pointer with a minute left to Due into the locker room with the lead.
Williamson’s early highlight came with the game tied at 16 as he took a pass on the baseline a few feet from the rim, rose up and put down a power jam. The sold-out crowd at 18,000-seat Colonial Life Arena watched it unfold and drew in a collective breath before exploding at the result. Williamson played high school basketball in Spartanburg, 90 miles away from his NCAA Tournament debut.
BIG PICTURE
North Dakota State: The Bison closed the season strongly simply to make the NCAAs. With a 15-15 record before the conference tournament, the Bison won three straight to win the Summit League Tournament. They then defeated North Carolina Central 78-74 on Wednesday night’s First Four matchup.
Duke: The Blue Devils had a sluggish start to the first — and probably only — NCAA Tournament for many of its freshman stars. But their ability to turn up the intensity will serve them well going forward, particularly if they hope to chase a sixth national title under coach Mike Krzyzewski.
TURNING UP THE D
North Dakota State shot 41 percent in the opening half, a number that dropped to 31 percent the final 20 minutes as Duke dug in on defense. The Blue Devils had 17 points off turnovers to just eight for the Bison.
LEFTIES
Barrett and Williamson were asked if part of their tight bond is because both are left handed. After a moment, Barrett said, “I guess it’s cool for sure,” when his coach, Mike Krzyzewski piped in, “Being right-handed is cool, too.”
UP NEXT
North Dakota State’s season is finished.
Duke will move on to face eighth-seeded VCU or ninth-seeded UCF on Sunday.
___
More AP college basketball: https://apnews.com/MarchMadness and https://twitter.com/AP_Top25

Guaranteed money at half for 2019 NFL free-agent contracts