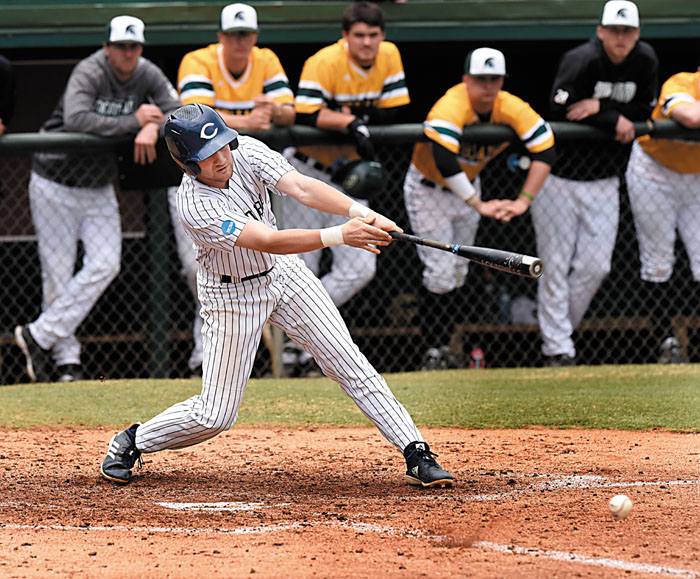 Catawba's Jeremy Simpson, shown in an earlier game this season, smacked a 3-run homer at Coker on Friday afternoon. Catawba rallied to win, 13-12. ... File photo by Wayne Hinshaw, for the Salisbury Post

The Indians had allowed seven runs in the bottom of the eight to fall behind 12-6, but took advantage of a two-out error to mount its unlikely rally. After a leadoff double by Jackson Raper, the next two Indians went down before Cameron Morrison reached on an error by the Coker centerfielder.

Once Morrison reached, the flood gates opened. Henderson Lentz singled and Jacob Nester tripled to make it 12-9. A double by Bryce Butler cut the margin to 12-10. Heath Mitchem reached on an infield single to put runners on the corners and set the stage for Simpson. Simpson took a 2-1 pitch out to left field, lifting the Indians to a 13-12 lead.

Peyton Williams pitched the bottom of the ninth inning, notching his sixth save. He retired the first two batters on a strikeout and a ground out, and after a walk, posted another strikeout to end the game. Greg Brown (3-0) got the Indians out of the eighth-inning Coker rally and earned the win.

The Cobras benefited from three Catawba errors to go up, 5-1, after four innings. Casey Demko had singled and scored in a three-run third then doubled home two in the fourth.

Catawba clawed back on top. Simpson plated a run on a ground out in the fifth, while Lentz and Nester did the same in the sixth. Hunter Shepherd’s sacrifice fly and Morrison’s RBI double put the Indians up 6-5 in the seventh.

Nine of the first 10 batters for the Cobras reached base in the eighth frame. Matt Swiderski’s pinch-hit, two-run single put Coker up, 8-7. Grant Thompson added a two-run single for a 10-7 edge, but Morrison nabbed a runner trying to steal third for a key out. Brown gave up a two-run double to Larry McCabe and another RBI-double to KJ Curry before getting the final out.

Simpson had just the one hit, but drove in four. Raper and Butler each collected three hits and scored twice. Lentz and Nester had two RBI. Thompson had three hits and three RBI for Coker. Jake Moore (1-2) took the loss for Coker, giving up the single to Mitchem and homer to Simpson.

The teams will wrap up the series with a doubleheader on Saturday, beginning at noon.