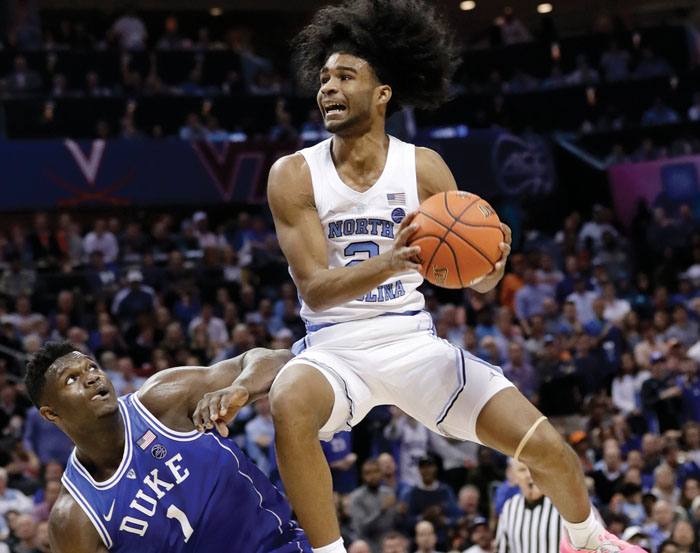 North Carolina's Coby White (2) drives to the basket against Duke's Zion Williamson (1) during the second half of an NCAA college basketball game in the Atlantic Coast Conference tournament in Charlotte, N.C., Friday, March 15, 2019. (AP Photo/Chuck Burton)

CHAPEL HILL (AP) — Cameron Johnson swears there’s no deals among North Carolina’s top three scorers determining who gets to lead the offense in each game. It sure seems that way sometimes, though.

The graduate wing, freshman point guard Coby White and senior Luke Maye have proven capable of carrying the Tar Heels on any given night. That has given the No. 1 seed in the NCAA Tournament’s Midwest Region multiple ways to run their offense, whether through Johnson on the wing, Maye’s inside-out game or White’s ability to attack from anywhere.

And that makes them versatile enough to pivot against most any defensive gameplan entering Friday’s game against 16-seed Iona in Columbus, Ohio.

“It’s just kind of been our team dynamic. Throughout our play in practice, you’ll see players kind of get hos in certain moments and we kind of right that in practice, so we’re used to it.”

Johnson, the 6-foot-8 graduate transfer in his second year after leaving Pittsburgh, is the leading scorer at 16.9 points. White has been terrific at pushing the tempo and attacking off the dribble to average 16.3 points. Then there’s Maye, the 6-8 forward averaging a double-double (14.7 points, 10.5 rebounds).

Williams said that 2009 winner — which included eventual NBA players like Danny Green and Ed Davis — was a deeper team with more scoring options beyond the top three. By comparison, this year’s team is more reliant on Johnson, White and Maye to carry the load and take a big shot.

Johnson has been the most efficient of the three, shooting nearly 51 percent overall and ranking fifth nationally in 3-point percentage (.465). White and Maye are both shooting 43 percent.

“They’ve done a great job,” Williams said, then paused to correct himself. “I shouldn’t say great job because I’m after them for their field-goal percentages too, because I want guys to very efficient. But we’ve needed every point they’ve given us, there’s no question about that.”

White became the first freshman in program history to have three 30-point games this season, while Maye cracked 30 points twice — including in UNC’s win at Duke’s Cameron Indoor Stadium. As for Johnson, he’s had 10 20-point games, including in two of three matchups against the No. 1 overall tournament seed Blue Devils.

“They know what’s a good shot and what’s not,” senior guard Kenny Williams said. “But I think the unselfishness is a big part of it. They want the team to win. … If there’s somebody that’s got it going, we’re going to keep trying to find them.”