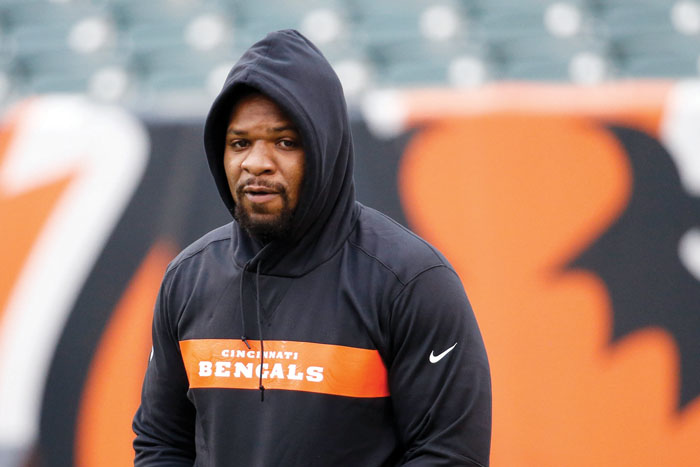 FILE - In this Dec. 16, 2018, file photo, Cincinnati Bengals outside linebacker Vontaze Burfict walks the field during practice before an NFL football game against the Oakland Raiders in Cincinnati. The Bengals terminated the contract of Burfict on Monday, March 18, 2019, releasing him to free agency. (AP Photo/Frank Victores, File)

The move Tuesday puts Burfict on a new team one day after he was released by the Cincinnati Bengals, where he spent his first seven seasons. During his time with Cincinnati, Burfict was repeatedly suspended by the NFL for violent hits and for violating the league’s policy on performance-enhancers.

One of Burfict’s most infamous hits was to the head of wide receiver Antonio Brown late in a playoff game in the 2015 season that helped the Steelers rally for an 18-16 win. Burfict and Brown will now be teammates after the former Pittsburgh star was traded to Oakland.

Burfict will be reunited with Raiders defensive coordinator Paul Guenther, who was in charge of the Bengals defense from 2014-17.

During his career in Cincinnati, Burfict had 8½ sacks and five interceptions. He made the Pro Bowl in 2013.

LOS ANGELES (AP) — Linebacker Clay Matthews agreed to a two-year contract with the Los Angeles Rams on Tuesday, returning to his native Southern California after a decade with the Green Bay Packers.

The 32-year-old Matthews set the Packers franchise record with 83½ sacks over his 10 seasons in Green Bay. The former USC star earned six Pro Bowl selections and won a Super Bowl ring with the Packers, although his 3½ sacks last season were a career low.

Matthews went to high school in Agoura Hills, California, and he lives in nearby Calabasas with his wife and growing family. Both towns are a short drive from the Rams’ training complex in Thousand Oaks northwest of downtown Los Angeles.

Matthews will contribute to the Rams’ pass rush alongside All-Pro defensive tackle Aaron Donald and linebacker Dante Fowler, who re-signed with the NFC champions earlier this month. Nose tackle Ndamukong Suh is still a free agent after his sole season with Los Angeles.

Matthews played four seasons for the Trojans at the Coliseum, where the Rams will play next season before moving into their multibillion-dollar stadium complex in Inglewood in 2020.

COWBOYS AGREE TO TERMS ON 1-YEAR CONTRACT WITH WR COBB

FRISCO, Texas (AP) — The Dallas Cowboys have agreed to terms on a one-year contract with free-agent receiver Randall Cobb.

Cobb spent the first eight years of his NFL career with the Green Bay Packers, though he was limited to nine games last season because of a hamstring injury and a concussion.

Along with the addition of Cobb, the Cowboys on Tuesday re-signed unrestricted free-agent long snapper L.P. Ladouceur They also signed Kerry Hyder, a defensive end from Texas Tech who was with Detroit last season.

Dallas has brought in Cobb and re-signed receiver Tavon Austin to a one-year deal since slot receiver Cole Beasley left in free agency last week for a four-year deal with Buffalo.