Police looking for ‘persons of interest’ in vandalism of “Fame” monument 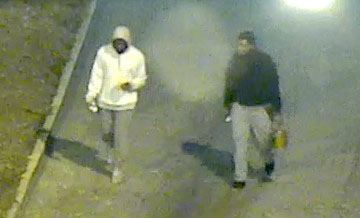 Salisbury Police are looking for two people of interest as it regards to the vandalism of the Confederate monument "Fame" that someone splattered with yellow paint. Submitted photo

SALISBURY — Salisbury Police are asking for the public’s help identifying two persons of interest in reference to the Wednesday morning vandalism of the Confederate monument “Fame.”

Police investigators have obtained video footage of a vehicle and two subjects were seen walking down the street. The two men are seen wearing jackets or sweatshirts, one of which appears to be a white or light-colored hooded sweatshirt and pants. Both appear to be carrying something in their hands.

Salisbury Police have not named the two men as suspects, but “persons of interest.”

Salisbury Police are looking for two people of interest in connection to the vandalism of the Confederate monument “Fame” that someone splattered with yellow paint. Police also want to obtain information about this vehicle. Submitted photo

Early Wednesday, someone tossed yellow paint onto the front of the statue and the base. It was seven months ago that white paint also was splashed onto the monument. No arrest has been made in the Aug. 18 incident.

Some residents cleaned the statue with water and sponges and, later, William Meng, owner of Prestige Pressure Washing continued cleaning the rest.

Investigators ask if any recognizes the vehicle or either of the two individuals to contact Det J. Easler at 704-638-5225, Salisbury-Rowan Crime Stoppers at 1-866-639-5245 or contact Salisbury Police Department via Facebook messenger.