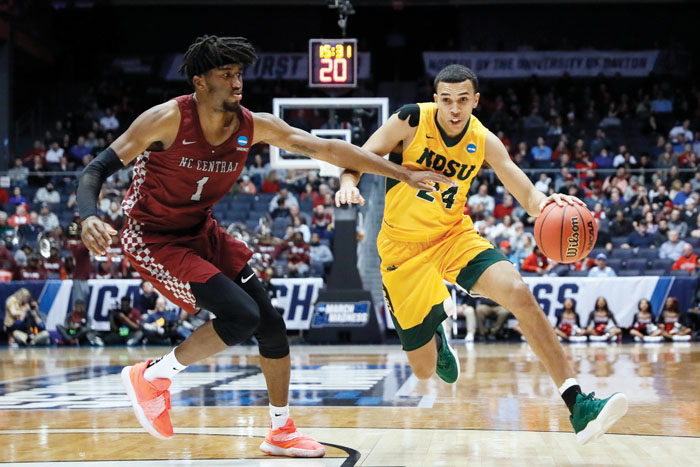 DAYTON, Ohio (AP) — North Dakota State is one of the best free-throw shooting teams in the country, and that’s what it came down to at the end of the Bison’s First Four win over North Carolina Central.

Vinnie Shahid sank three foul shots in the last 8 seconds to secure the 78-74 win on Wednesday night for North Dakota State, which now moves on to play East Region No. 1 seed Duke on Friday in Columbia, South Carolina.

“I thought that was key to make free throws, something that we’ve pretty much done all year,” coach David Richman said. “Again, when it’s this time of year, it’s going to come down to possession here, possession there and those free throws. Every one of them is crucial.”

North Dakota State (19-15) won its second NCAA Tournament game since moving up to Division I 11 years ago. The team from Fargo upset Oklahoma in the opening round in 2014.

Shahid had 14 points, and Sam Griesel and Jared Samuelson each added 10 points for the Bison. Eight different North Dakota State players put up points against a tough N.C. Central defense.

N.C. Central (18-16) squandered an outstanding night by senior center Raasean Davis, who scored 20 points and pulled down 16 rebounds — the 16th double-double of his career. Larry McKnight Jr. also had 20 points and Randy Miller Jr. scored 18 for the Eagles, who lost a First Four game for the third consecutive year.

N.C. Central: The Eagles mounted a comeback but couldn’t keep a second-half lead for long. A lack of depth was part of the problem: N.C. Central got zero points from its bench, while North Dakota State’s reserves scored 17.

“Thought we got into some adverse situations, and we showed our toughness,” N.C. Central coach LeVelle Moton said. “We fought and we fought and we fought some more. Unfortunately, with two minutes left, we just didn’t make the plays that were required to win a basketball game of this magnitude.”

North Dakota State: The Bison used outside shooting to bolt out to a lead in the first half and then adapted down the stretch.

North Dakota State will be a huge underdog against Duke.

“We’re ready for the challenge, ready to go compete,” Samuelson said. “We’re going to enjoy this one for a little bit. But we’re ready to go get ‘em.”

Said Ward: “You always want to play the best. So chalk it up, and we’ll see what happens.”

North Dakota State, a No. 16 seed, moves into the main NCAA bracket, where Zion Williamson and the Blue Devils await.