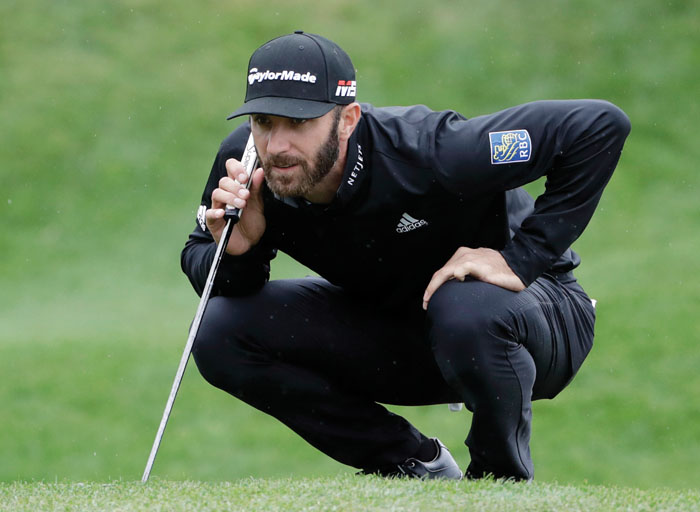 Dustin Johnson lines up a putt on the second hole during the final round of The Players Championship golf tournament Sunday, March 17, 2019, in Ponte Vedra Beach, Fla. (AP Photo/Lynne Sladky)

PALM HARBOR, Fla. (AP) — Dustin Johnson is peaking. The Masters is nearing. And he was talking Wednesday about an injury from the stairs.

At least this time it was his brother.

“Those stairs, man,” Johnson said with a smile. “They’ll get you.”

Johnson has been trying for two years to get back to the best golf he ever played, when he won three straight tournaments against the strongest fields to reach No. 1 and become a heavy favorite at the Masters. And then he slipped down the stairs at his rental home in Augusta, Georgia, withdrew, and hasn’t returned to that level of golf.

He feels closer than ever as he plays the Valspar Championship for the first time in nine years.

Johnson won the World Golf Championship in Mexico by five shots, and he was in position to contend at The Players Championship until the putter deserted him and Johnson finished three shots behind.

“I feel like the swing is starting to feel a lot better. The shot patterns are starting to get more consistent,” Johnson said. “So now, it’s the closest I’ve been to that.”

He’ll have a caddie with one working arm.

Austin Johnson returned home from The Players Championship carrying luggage up the stairs in wet rain pants when he tripped and braced the fall with his left arm. He’ll have a cast on his left arm for the week, which would be a bigger problem if he had to swing a club.

Johnson wasn’t planning to be at Innisbrook except for the PGA Tour’s policy of players competing in an event they have not played in four years. Johnson thought he was excused from that when he won his 20th career PGA Tour title in Mexico, until learning that night he still had to put in 15 years (he’s in his 12th season).

The Valspar Championship was an easy choice.

The Copperhead Course is a strong layout that doesn’t rely heavily on water hazards like most Florida courses. It has subtle elevation and tree-lined fairways, and the winning score has been no better than 10-under 274 in five of the last six years.

It’s why Jon Rahm is at Innisbrook for the first time.

“Every part of your game is going to be tested, and every part of the game needs to be on to be able to win,” Rahm said.

Johnson played this event in 2008 and 2010 and doesn’t remember much about it. That much was evident in the pro-am when he walked off the first green and said, “Where are the flags?”

Attached to the pins was not the answer he wanted. Johnson has no recollection of pin positions. He wasn’t sure some of the lines to take off the tees, and this was one time he would have preferred an 18-hole pro-am instead of going nine holes before another pro replaced him.

Having the No. 1 player in the field was still a boost for the tournament, which last year sold out when Tiger Woods played for the first time and finished one shot behind Paul Casey. With the compact schedule and The Players Championship moving from May to last week, Woods decided to sit out the week before Match Play.

Rahm didn’t need to play Innisbrook to fulfill the tour’s scheduling policy. Most of his decision was word-of-mouth and, like Johnson, he is rounding into form. Rahm, the 54-hole leader at The Players Championship, was still tied for the lead on the back nine until Rory McIlroy birdied two of the last tree and Rahm didn’t keep up.

Most of the attention was on Rahm’s debate with caddie Adam Hayes on the par-5 11th, when the caddie wanted him to lay up and Rahm wanted to go for the green with a hard draw out of the bunker. Rahm won the argument and hit into the water.

“Adam was just doing his job and voicing his opinion and then as usual, the player has the last say,” Rahm said. “It’s as simple as that. We always worked very openly like that. We always say what’s in our mind whether we like it or not, and that’s why it works so well. … Because of that we hardly ever have any complaints about each other.”

Rahm said it was their first disagreement in three years together, and he made it clear that “it will never be Adam’s fault” because Rahm is the one hitting the shot.

DIVOTS: Cleveland-based Sherwin-Williams, which owns Valspar, says it has extended its title sponsorship for the Valspar Championship through 2025. When the calendar changes in a few years and there is one less week available before the Masters, Valspar could be a tournament that moves to April. Tournament director Tracy West said: “March, April, any of those dates are great. We sell paint in the spring.”

Braves may have three open spots in pitching rotation