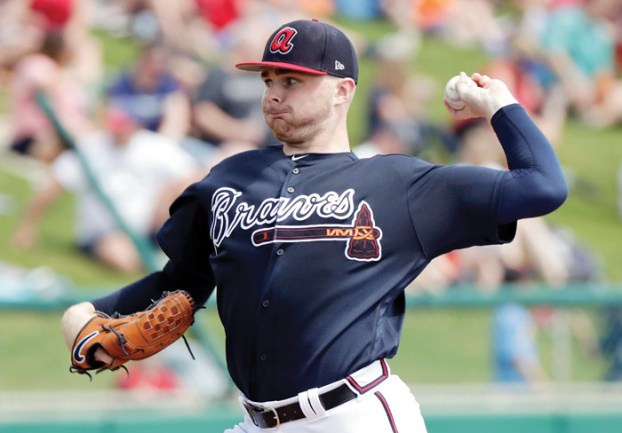 FILE - In this Friday, March 15, 2019, file photo, Atlanta Braves' Sean Newcomb pitches against the Miami Marlins in the second inning of a spring baseball exhibition game in Kissimmee, Fla. Newcomb appears to be one of the few certainties in the Braves' unsettled rotation. (AP Photo/John Raoux, File)

Braves may have three open spots in pitching rotation

KISSIMMEE, Fla. (AP) — When they started spring training, the Atlanta Braves had one opening in their pitching rotation. With a week to go before opening day, they may have three.

The Braves are holding out some hope that Kevin Gausman will work through his shoulder soreness in time to pitch a game in the first turn through their rotation.

However, that appears unlikely. Gausman, who has pitched only two innings in games this spring, threw a 58-pitch bullpen session on Tuesday.

“You’d like to get him up to 90 before you’d pitch him in a major league game,” said manager Brian Snitker.

Mike Foltynewicz, who last pitched Feb. 24 before elbow soreness set in, is throwing again but will need a month buildup before starting a regular-season game.

That leaves Julio Teheran and Sean Newcomb as the only named members of the rotation, with Teheran expected to start the Braves’ opener at Philadelphia on March 28.

Snitker doesn’t expect to announce any additions in the next few days.

“We’ve got a week left to see where we are. We aren’t forced to make any decisions yet,” Snitker said. “We’ll see what happens (with Gausman’s) next time out and go from there.”

Even if Gausman is ready to pitch in the first days of April, that leaves four young and inexperienced arms competing for two spots — Touki Toussaint, Kyle Wright, left-hander Max Fried and 21-year-old Bryce Wilson, who is considered a long shot with no major league experience.

Mike Soroka, another 21-year-old pitcher, is also throwing pain-free for the first time in weeks. But he hasn’t pitched in a game. Soroka, who was shut down late last summer with the same kind of shoulder soreness he experienced this spring, was optioned to the minor league camp on Wednesday.

Relievers A.J. Minter (shoulder) and Darren O’Day (forearm tightness) are expected to start the season on the injured list, opening spots in the bullpen.

The Braves had hoped to stock most of their promising young starters in the minor leagues in April and bring them up during the season. But the injuries have sped up the timetable and at least two of the pitchers are likely to start the season in the rotation.

The 25-year-old Fried is the latest to state his case, with five shutout innings and seven strikeouts Tuesday against the Washington Nationals.

“We have a lot of guys throwing really well, so it gives you that little extra ‘I-want-to-top-the-other-guy,’ but I think that’s really healthy,” said Fried, who has nine major league starts. “You’re not only competing against the other team but you’re competing against yourselves. It only pushes you that much farther.”

Snitker said Fried, Wright, Toussaint and Wilson will be ready to follow Teheran after the opener.

“We’ve got everybody lined up. Everybody’s in good shape and we don’t feel pressure to have to do anything (outside the roster),” Snitker said. “Pretty much all of them have had really nice camps, too. Coming off the experiences they had last year, they seem to be continuing to build on that.”

By Stephen Wade AP Sports Writer TOKYO (AP) — Ichiro drew all the cheers. Most everyone else on the Seattle... read more