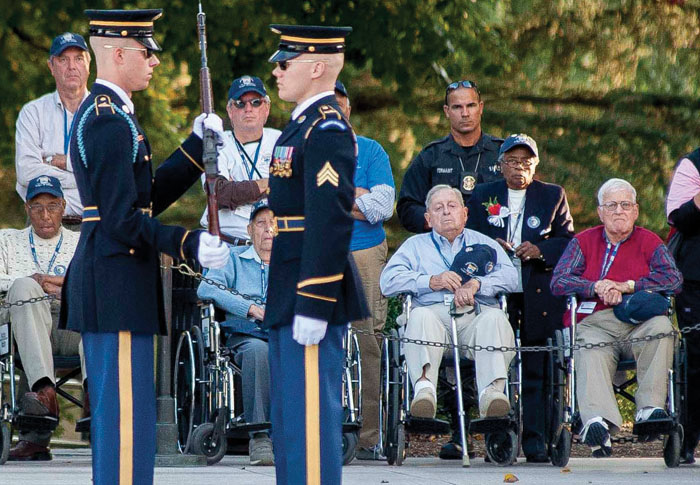 SALISBURY — Back in February, many people heard for the first time about World War II and Korean War veteran Bertha Harrison Dupre.

She had died alone Dec. 19, 2018, at Concord Transitional Healthcare. No one came forward to claim her body or pay for her funeral until social worker Rhonda Fernandez and Cabarrus Veterans Service Officer Lori Hinson started working on her behalf.

They reached out to Carolina Cremation in Salisbury for assistance, and eventually sister company Powles Staton Funeral Home in Rockwell also became involved.

Soon preparations were underway to give Dupre a procession and funeral service with full military rites at Salisbury National Cemetery. Those things will happen Friday morning, and remarkably many people are now involved.

“The reaction to this has just been unbelievable,” says Russ Roakes, a funeral director with Powles Staton.

The funeral service for Dupre, who was 97, will be held at 11 a.m. Friday at the National Cemetery with the N.C. National Guard and Rowan County Veterans Honor Guard participating.

Her ashes — she was cremated Jan. 3 — will be placed in the cemetery’s columbarium.

But what happens before the funeral may be even more impressive.

A procession that includes two of Freightliner’s military-decorated trucks, Rowan County Sheriff’s Office and Salisbury Police Department escorts, and what Roakes predicts will be “a huge turnout” of Patriot Guard motorcyclists will accompany Dupre’s ashes from the funeral home in Rockwell to the National Cemetery.

Roakes said the Patriot Guard contingent will have participants from as far away as New York.

Four Sheriff’s Office cars will lead the way westward on U.S. 52, and four Salisbury police vehicles will join them at the city limits. The procession will continue all the way to Statesville Boulevard before taking a left and proceeding to the Salisbury National Cemetery’s main entrance (behind the VA Medical Center) at 501 Statesville Blvd.

Roakes expects the procession to reach the cemetery by about 10:45 a.m.

“It will be interesting to see how many folks will be there,” Roakes said of the cemetery turnout and stressing that the public is welcome. “I hope it’s a big crowd.”

Prior to that, as many women did after the United States entered World War II, Dupre was a clerk and typist for the War Department in Washington.

Dupre rose to the rank of master sergeant. In 1945, as the war in Europe wound down, she served overseas (mostly in France) from March 25 to Dec. 3, according to service records.

According to her 1950 application for World War II compensation filed with the Commonwealth of Pennsylvania, Dupre received an honorable discharge at Fort Dix, New Jersey, Dec. 7, 1945 — exactly four years after the attack on Pearl Harbor.

After World War II, Dupre returned to work for the government. At the Veterans Administration, she helped with the paperwork for veterans going to school.

She also entered the WAC reserves, leading to her being called back to duty at the beginning of the Korean War. The WAC sent her to Fort Belvoir, Virginia, where she ordered food for the fighting forces.

Dupre followed up that yearlong service by going to the quartermaster offices in Washington and Philadelphia.

Over the next 30 years, she would marry and help raise two stepsons. She worked as a housekeeping supervisor at Bowie State University, then for Amtrak for 11 years.

As an Amtrak supervisor, she oversaw service employees on the passenger route between Washington and Montreal.

She reportedly moved to North Carolina in 1992 in search of warmer weather. The Charlotte Observer wrote a story on Dupre on Oct. 6, 2008, when she was taking art classes at the University of North Carolina at Charlotte as an 87-year-old.

In the last five years of her life, Dupre became a ward of the state.

Roakes and Andrea Lefko, a funeral director at Carolina Cremation, have been heavily involved from the start in organizing the farewell for Dupre.

The funeral home and cremation services have absorbed the costs, while other companies have come forward to provide the vessel for Dupre’s ashes and a guest registry.