Happy 100th! American Legion is a century old, and Harold B. Jarrett Post celebrates in style 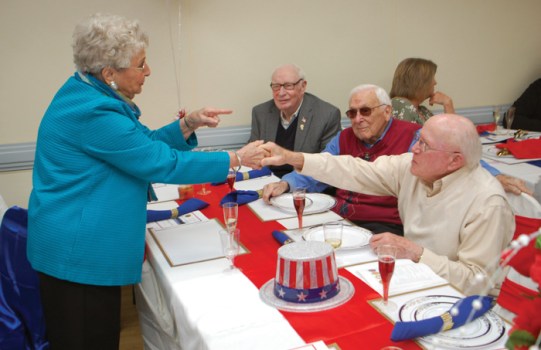 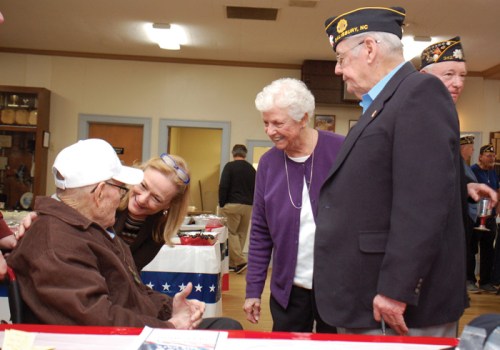 Pinky Trexler, seated, speaks with Julie Smith as Phyllis Richardson and Harry Garwood also wait to greet Trexler, who was honored Monday night with lifetime emeritus sergeant of arms status by the Harold B. .Jarrett American Legion Post 342, of which he has been a member for 70 years. Mark Wineka/Salisbury Post 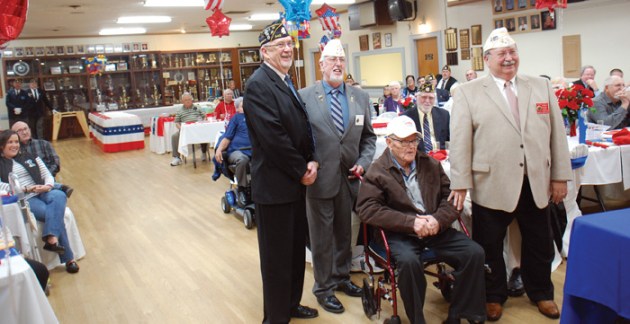 SALISBURY — There were plenty of stars at Harold B. Jarrett American Legion Post 342 on Monday night to celebrate the 100th birthday of the American Legion, founded in March 1919 in Paris by U.S. military personnel.

N.C. Department Cmdr. Evan Thompson was the guest speaker, and his talk reminded the local Legionnaires of how remarkable their veterans organization has been over its century of existence.

N.C. Department Judge Advocate Gaither Keener led the room of Legionnaires and friends in a 100th birthday toast to those who came before them and those who are members now.

Thompson helped the post celebrate the service of J.P. “Pinky” Trexler, who this year is marking his 70th year as a Legionnaire.

Jack Kepley also showed up for Monday night’s dinner. Kepley is the lone surviving original member of Jarrett post, which was chartered in September 1946.

Another star of the evening was Debbie Suggs Catering’s dinner food and specially made cake, which celebrated the parent organization’s 100th birthday.

But one could argue the biggest star of Monday night’s Legion celebration was Mary Helen Jarrett McCombs, the baby sister of the man for whom the local post is named.

Harold B. Jarrett served with the invasion forces that landed in southern France on Aug. 15, 1944. He was killed four days later by German artillery during the battle at Brignoles. Jarrett was a 24-year-old sergeant at his death.

Mary Ellen McCombs, 13 at the time, said she and her father were home the day the Western Union telegram came to the house in Salisbury. She opened the telegram that confirmed her brother’s death.

The family already feared Harold’s fate because they hadn’t heard from him in quite a while. McCombs, who is married to Verne McCombs, said opening that telegram definitely became a life-changing experience for her.

Thompson, who has attended many Legion celebrations throughout the state, said Salisbury’s was “one of the most beautiful presentations I have seen.”

Thompson, a Marine Corps veteran, reminded the audience of the Legion’s four pillars of service and advocacy — veterans, military personnel, youth and patriotic values — and how the organization has worked for those principles since its establishment.

Harold B. Jarrett Post 342 is one of roughly 300 posts in North Carolina and 13,000 posts worldwide with about 2 million members. The American Legion has 55 “departments,” taking in the 50 states, District of Columbia, France, Mexico, the Philippines and Puerto Rico.

As Thompson outlined, the American Legion played a big role in the formation of the Department of Veterans Affairs, the creation of the U.S. Flag Code and passage of the GI Bill.

Thompson said the GI Bill is considered by many to be the most important piece of social legislation ever passed. “Out of this …,” Thompson said, “came the middle class.”

Thompson  spoke of how the military personnel who founded the American Legion envisioned an organization dedicated to strengthening the nation, not themselves. They had seen how the United States went into World War I unprepared and ended the war ill-equipped to take care of the sick and wounded.

American Legion baseball started in 1926, and today Shelby and Cleveland County — Thompson’s home base — are hosts for the American Legion Baseball World Series.

The organization’ national oratorical contest was established in 1941 to generate student interest in the U.S. Constitution. “It’s a great, great contest for youth,” Thompson said.

American Legion started a “Back to God Movement” in 1950 — something maybe the country should consider again, Thompson said.

The American Legion created its National Emergency Fund in 1989 to help with natural disasters.

Throughout its history, the Legion has followed a relentless pursuit of truth in helping veterans with service-connected conditions, Thompson said.

The American Legion also has dedicated itself to never forgetting prisoners of war and those missing in action. At every Legion meeting, there is a POW/MIA empty chair ceremony as a reminder.

Thompson said the American Legion has a legacy “like no other in the history of the United States” — one that has strengthened the nation and will continue to prove vital in its second century of service.

Thompson encouraged today’s members to ask themselves two questions: “Why did I join?” and “Am I doing my part for this great organization that has done so much for me?”

Charles Frick, commander of the Harold B. Jarrett Post, presented Thompson with flags that had flown over the state Capitol and U.S. Capitol.