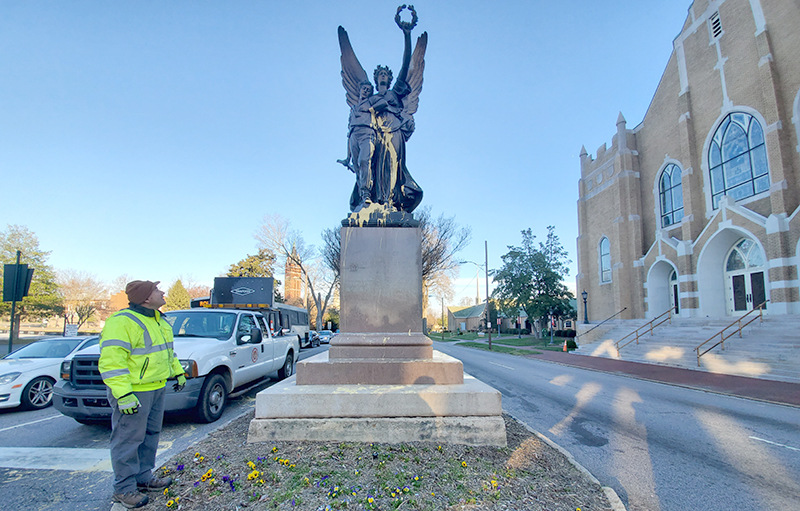 Josh Bergeron / Salisbury Post - A city employee looks at the "Fame" monument in downtown Salisbury, which was vandalized sometime between Tuesday evening and Wednesday morning.

SALISBURY — The “Fame” monument in downtown Salisbury — dedicated to local soldiers who fought for the Confederacy — was splashed with yellow paint between Tuesday night and Wednesday morning.

Paint on the monument, of a winged figure cradling a soldier, stretched from the soldier’s arm to the base. A large amount of the paint was on the base as well as West Innes Street below.

City crews were briefly on scene, but said they would not be responsible for removing the paint, as the structure is on private property and owned by the local chapter of the United Daughters of the Confederacy. By about 9:30 a.m., Salisbury resident Clyde was working to scrub off the yellow paint. By Wednesday afternoon, the paint had been removed.

It’s the second time in seven months that “Fame” has been vandalized. Around 2 a.m. on Aug. 18, paint was also splashed on the monument.

The Salisbury Police Department said it’s looking into who vandalized the “Fame” monument with paint. Police officials said this morning they will review any available surveillance video that may have captured the vandals.

In August of 1908, Mayor A.H. Boyden signed a resolution designating the grassy median at the intersection of West Innes and Church streets as the site of the United Daughters of Confederacy monument. It was later recorded in the Rowan County Register of Deeds Office. However, no formal deed or transfer of ownership for the property exists.

On May 10, 1909, the monument was dedicated to the 2,500 Rowan County soldiers who fought for the Confederacy. Around 4,000 people attended the ceremony, including Frederic Wellington Ruckstuhl, the sculptor; Anna Morrison Jackson, the widow of Stonewall Jackson; and 162 surviving Confederate veterans.

No charges were ever filed in the previous vandalism incident.