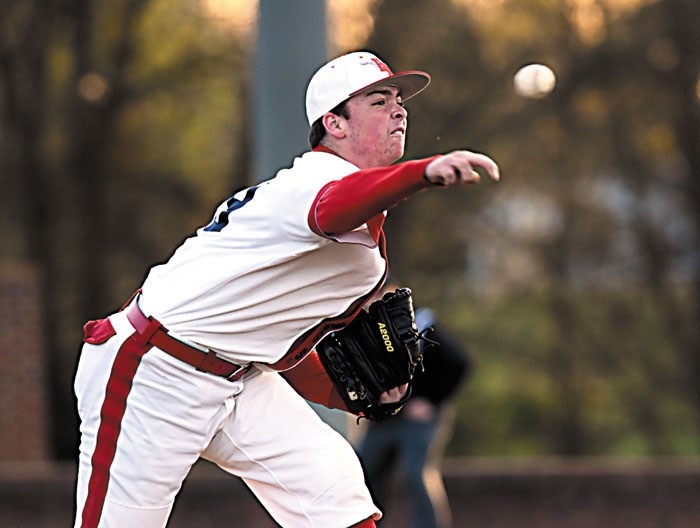 The junior outfielder broke a 1-1 tie when he singled home J.D.Basinger with two out in the top of the 13th inning — then scored an insurance run on teammate Jake Hunter’s two-run double — keying a 4-2 victory at West Rowan.

“(Mize) had a broken nose and missed 17 days,” coach Brian Hightower said, shortly after East (5-3 overall) opened its NPC season on a winning note. “So he’s just getting back in the groove. He’s an all-state player. We’ve just got to get him some at-bats and hopefully it’ll warm up soon.”

The game ended three hours and 58 minutes after the first pitch when Basinger snuck a 2-2 curveball past West’s Daniel Sell with the potential tying runs in scoring position.

“Well, we struck out too many times,” losing coach Seth Graham said after West (3-3, 0-1) fanned 20 times and lost its third straight. “Twenty strikeouts? Not against that pitching. I know we’re not great offensively, but we can’t strike out that many times.”

The game was scoreless for nine innings before East took a 1-0 lead against reliever Payne Stolsworth in the top of the 10th. Hunter — the Mustangs’ starter who rang up 12 batters in seven scoreless frames — opened with a double to left and was replaced by courtesy runner Jake Holshouser. Two batters later, Griffin Warden whipped an RBI-single to left.

West — limited to four singles — received six scoreless innings from starting pitcher Cullen Davis. It tied the score against East’s Cameron Padgett when Daniel Sell legged out a leadoff hit to deep shortstop, took second on a sac bunt by Jake Perez and scored when Stolsworth’s sharp grounder was mishandled.

The Falcons left 13 runners on base, 10 of them in scoring position. They drew within 4-2 in the last of the 13th when Lane Atkins coaxed a one-out walk, advanced to second on Cameron Graham’s base on balls and scored on Basinger’s wild pickoff attempt at first. He escaped further damage by fanning West’s last two batters.

“J.D. did a good job, but we expect that out of all of our guys,” said Hightower. “I think pitching is our strength. We just gotta hit a little bit.”

East finished with 10 hits — including a pair of doubles by Hunter, its third and fourth extra-base hits of the season — but stranded 16 baserunners. The Mustangs loaded the bases without scoring in both the first and fourth innings.

“It was a well-fought game,” Graham said. “We had opportunities early but didn’t cash in. And we made too many mistakes — too many to win the game.”

With a thick scarf wrapped around his face, Hightower looked relieved when the marathon ended.

“It’s a big conference win because you’re playing two in a week,” he said. “We start out with West and Carson, so we’re just coming out and seeing what happens.”

NOTES: Davis, a junior right-hander, was chasing his third victory. He struck out seven, giving him 26 in 15 2/3 innings pitched. … East’s pitchers hit six batters, including Bailey and Steven Smith twice each. … The Mustangs successfully executed the hidden ball trick in the last of the fifth, when West pinch-runner Michael Molenda was caught wandering off second base. … Mize entered the game hitting just .143. … Both teams play non-conference games today before meeting again Friday night in Granite Quarry.