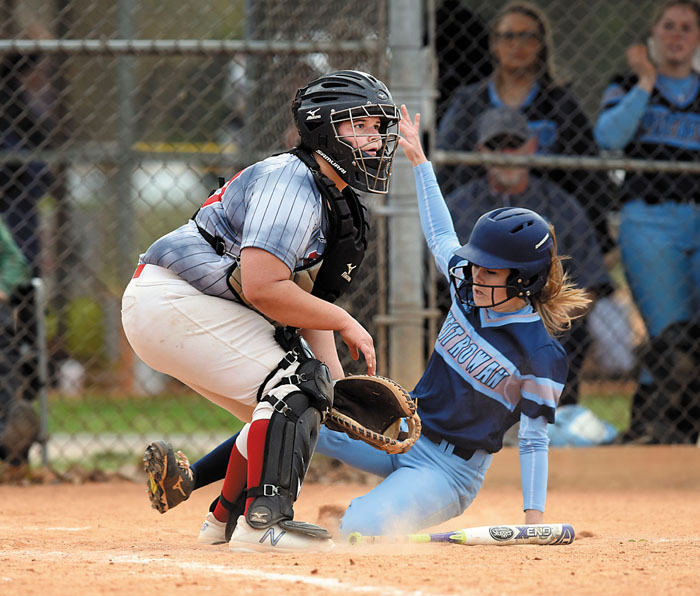 Playoffs: Lost 2nd round 2A to West Stanly

“Sure, it gets frustrating,” South coach Dean Mullinax said. “It’s a rough start, but we know it’s a process. We’ll get through this. We’ll be OK.”

South was a very good 2A team last year, winning 17 games, but that was with Whitley Arnott striking out 184 batters and Brooke Lowery, the runner-up for Central Carolina Conference Player of the Year, pummeling softballs for a .465 batting average.

Lowery is now a freshman at Catawba. Arnott, a junior who is a Division I prospect, transferred to West Rowan.

Summer McKeon, a Division I signee with a big bat, was “dismissed for violation of a team rule.”

That means that as successful as South was last season, the Raiders have taken a step back when it comes to scoring runs —  and preventing them. It’s been hard to compete in a league that features traditionally strong programs such as North Davidson, Ledford, Central Davidson and West Davidson.

“We can’t be mediocre in the field and get away with it,” Mullinax said. “We made six errors in one of our recent games, and that’s not going to beat anybody. When our young pitchers get ground balls, we’ve got to get an out. And when we get people on base, we need key hits. In two of our games, we hit the ball pretty well, but we hit it at people. In the other games, we didn’t hit much. We’re batting .200 as a team.”

South still has quite a few girls on the field who started last year.

Lenoir-Rhyne signee Anna Blume, the senior third baseman, will be counted on to drive in runs. She has good power and a strong arm.

Shortstop Ashlyn Plott, another senior, has been a starter for the Raiders since she was a freshman. She drove in 15 runs last season.

“We’ve got a lot of experience in the infield and behind the plate,” Mullinax said.

Kali Thompson, a senior, is starting at first base for the first time.

Left field will usually be manned by one of South’s freshman pitchers — McKinley Faw, Zoie Miller or Kali Nelson.

As far as the circle, those three freshmen have been thrown into the fire on the varsity level. South already has faced Ledford and North Davidson.

“All of those young pitchers have accepted the challenge and all three are invested in the program,” Mullinax said. “They’re all with a pitching coach, and they’re all learning things every week. Walks kill you, and they understand that. They’re starting to understand the importance of throwing a first-pitch strike.”

“A lot of small stuff has been biting us,” Mullinax said. “We’ve got to do a better job of understanding game situations. We’ll keep working at it. We’ll get better.”