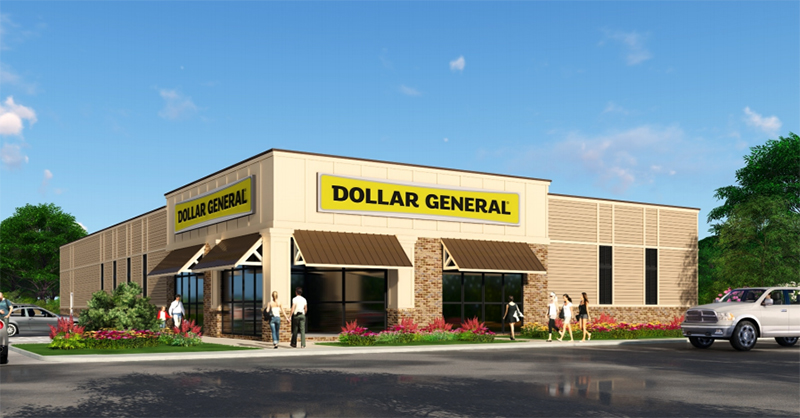 A rendering of what the proposed Dollar General in the Rockwell area could look like. Rowan County commissioners approved this design along with a rezoning on in March.

SALISBURY — After turning down similar proposals in the past, the Rowan County commissioners on Monday approved a controversial rezoning on Organ Church Road near Rockwell that allows developers to build a Dollar General.

The 9,100-square-foot store would be at the intersection of Organ Church Road and N.C. 152. In voting 4-1 to rezone the property, the commissioners included conditions such as an alternate building appearance and a sign in a “monument” style that’s grounded instead of raised in the air.

Commissioner Craig Pierce was the lone vote against the proposal, saying that the large number of people opposed to the rezoning was reason enough not to support it. While developers made the case Monday that the store would sit at a so-called “community node” in the eastern Rowan land use plan, Pierce said the plan is a guide, not a mandate for zoning.

But those opposed to the rezoning were not a clear majority among the crowd present. The traffic is already dangerous at the Organ Church Road-N.C. 152 intersection, opponents said. The new store would draw shoppers from nearby rather than elsewhere and, as a result, would not add to the traffic count, supporters said.

Commissioners Chairman Greg Edds was among those saying the store would not significantly add to traffic.

“It’s not going to bring them from Cleveland,” Edds said.

An opposition argument from Justin Smart, who said he would be able to see the store from his house, was that the needs of the community are already met with other, nearby businesses.

Smart and opponents delivered a petition with more than 470 signatures on Monday opposing the Dollar General, but commissioners raised questions about how it was distributed, noting that some signers did not have addresses near the site in question.

Smart said opponents dropped the petition off at nearby stores and some patrons copied the petition and began their own efforts to gather signatures. The petition was also posted on social media.

Meanwhile, supporter Shelly Voros said opposition was solely focused on the fact that developers want to build a Dollar General store rather than the substance of Monday’s vote — a rezoning from rural agricultural to commercial, business and industrial with a conditional district.

The four commissioners voting “yes” said they support the rezoning for reasons that include the site being adjacent to several businesses — it was not spot zoning — and that the community would decide whether it wants the store through its profitability.

Edds said he called Dollar General representatives shortly after the Rowan County Planning Board gave its approval to the request in January to discuss the appearance of the building.

“I picked up the phone, called and said, ‘Y’all need to step up your stores in Rowan County,’” Edds recalled. “We told them that Dollar Generals that are considered from now on are going to look different.”

On Monday, Terramore Development, which was requesting the rezoning, presented six options for the store’s appearance, asking county commissioners to pick one. The final choice included fake rectangular windows at several spots on the side of the building, a stretch of full-length glass windows at the entrance and four small awnings at the entrance, too.

Commissioners requested that developers provide an updated site plan showing the selected design, but that doesn’t need to be approved by the commissioners at a subsequent meeting.

Recalling other zoning requests that involved a Dollar General, board Vice Chairman Jim Greene said those involved factors making a “yes” vote tough. A request in southeastern Rowan County in 2015, for example, was for property near Morgan Elementary School. Factors behind that denial, Greene said, included that the road had a number of hills, that cars parked on the side of the road while waiting to pick up children and that motorists may not see the parked cars because of the hills.

“I hope you don’t think we’re rubber-stamping anything that comes through here,” Greene told the audience.