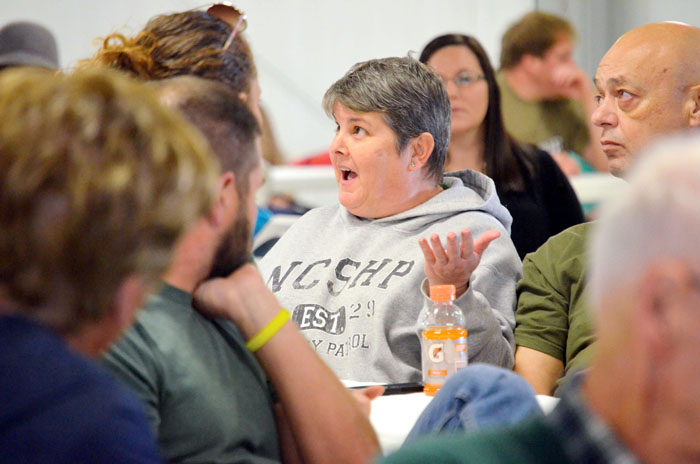 A Faith Elementary School parent expresses frustration at a meeting held Sunday at the Rowan County Fairgrounds to discuss the proposal to close the school by the end of the school year. Over 100 parents and supporters attended the meeting. Shavonne Walker/Salisbury Post

SALISBURY — Patricia Kluttz and her husband say they will home-school their 10-year-old if the Rowan-Salisbury school board decides to close their beloved Faith Elementary School.

The couple were among many parents and supporters of the school who attended a Sunday meeting at the Rowan County Fairgrounds.

School Board Chairman Josh Wagner unveiled his recommendation to close the school at a board meeting last week. Some of the reasons he cited were that the school has more than $3.4 million in capital needs and is more than 90 years old.

On Sunday, there was talk of forming a charter school if the school system’s proposal is approved and Faith Elementary closes.

“If all else fails, we open a charter school,” said Randall Barger, a member of the Faith Board of Aldermen.

Parents and supporters of Faith Elementary gathered Sunday at the Rowan County Fairgrounds to receive information about a proposal to close Faith Elementary School at the end of the school year. Shavonne Walker/Salisbury Post

Barger asked those in attendance Sunday if they would support a charter school if needed. Most of the parents in the room raised their hands. Barger acted as a facilitator for the meeting along with former Faith Mayor Tim Williams, who has been vocal about his opposition to the proposal.

Williams said he has been in contact with someone in Ellenboro, in Rutherford County, who has experience establishing a charter school. Barger said he doesn’t know much about charter schools but is doing some research.

In 2016, residents of East Spencer began the process to open a charter school. In 2018, the Essie Mae Kiser-Foxx Charter School opened.

If Faith Elementary were allowed to stay open another school year, Barger said, it would give parents an opportunity to put in motion plans for a charter school.

When asked if she had made other plans for her child, Patricia Kluttz said she has already ordered a home-school curriculum. She said home-schooling would be temporary until a charter school is opened.

Kluttz promised that she and her husband, who own MK Lawn Care, would provide lawn care for the charter school at no cost.

Williams said the reason parents and supporters were asked to meet was so their voices could be heard and to provide parents with as much information as possible.

“They’ve gone from consolidation to redistricting and now closing a school, and they are starting with Faith,” Williams said.

He said parents and supporters of Enochville Elementary and Koontz Elementary were invited to attend the meeting, but it did not appear that many were among the 100-plus people there.

Williams said he has concerns about the capital needs of the school, including nearly $500,000 for paving and $345,000 for repairs to doors and other hardware.

He joked that with that much money, the group could pave the entire town of Faith. He questioned who came up with those numbers.

“How many have been to the Faith Fourth of July celebration?” Barger asked.

Many in the room raised their hands.

“What if a county group says, ‘You can still call it Faith Fourth, but we’re going to move it to Salisbury,'” Barger said.

When he mentioned moving the students from Faith Elementary, which is considered a high-performing school, to the lower-performing Koontz, parents began clapping. Koontz test scores are among the lowest in the school system. 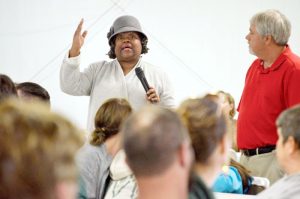 Tangy Roseborough, who doesn’t have a child or grandchild at Faith Elementary, attended to show opposition to the proposal to close the school as meeting facilitator Randall Barger looks on. Shavonne Walker/Salisbury Post

Former Sheriff George Wilhelm said an endowment has been created to support Faith youths, but it could be earmarked for the Faith community if there is a cost incurred to fight the plan.

Salem Dietz has already transferred one child to another school, and she entered a lottery to get another child into Gray Stone Day School in Misenheimer. But she doesn’t want to move her third-grader.

Tangy Roseborough, who attended Rowan County schools but doesn’t currently have any grandchildren in the system, said she came to support the Faith community’s efforts.

“I just love a challenge,” she said.

Roseborough was vocal during the meeting, encouraging parents to be involved. She said that’s the only way to succeed.

“I just think there’s a barrier and nobody wants to talk,” she said.

Mike Lyerly a former Faith resident, said his children attend Morgan, but he wants a positive outcome for Faith students and parents. He did some research about the general statutes and shared his findings with those gathered. He encouraged them to look into what the law says can be done about high-performing schools and closings.

Barger said he was pleased with the turnout because it shows the community cares.

Barger suggested parents and supporters flood local media with letters and voice concerns at the March 25 school board meeting. Although the board has chosen to move forward with the plan, it must hold a public hearing and take a final vote.

Ask Us: What happened to South Main Street’s Club…