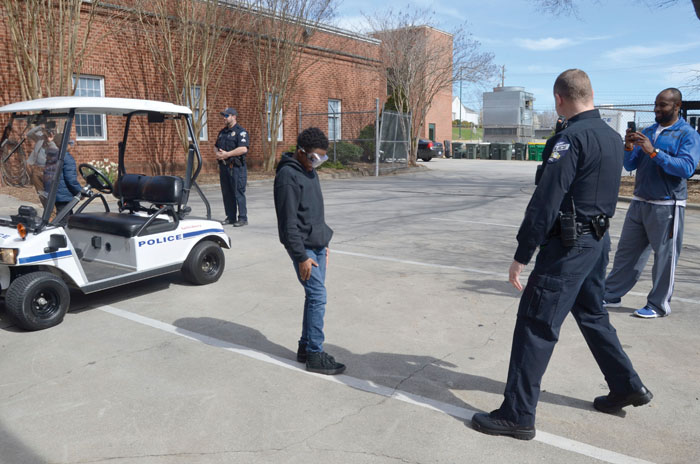 SALISBURY — Jayden Ekpene can say he’s never had an up-close-and-personal experience with impaired driving quite like the one he had Saturday at the Salisbury Police Department.

The 11-year-old Greensboro resident and about 14 other students, who are a part of a youth development/mentoring program called the Kappa Guide Right Initiative, stopped by the police agency to learn about law enforcement. The group also consisted of mentors and parent volunteers who also toured the department, met officers, and learned about crime scene investigation.

Jerry Oglesby Jr., who is part of the fraternity initiative and works at the Winston-Salem technology company, T.E. Connectivity, reached out to Police Deputy Chief Shon Barnes, a member of Kappa Alpha Psi, about partnering for the program.

The African Heritage group, along with Kappa Alpha Psi Fraternity Inc., sponsored and provided volunteers/mentors for the group of students. Most of the students were from the Guilford and Alamance county areas.

“We are exposing them to different types of educational activities and fun activities. We do a practical lesson every third Saturday and then a fun activity like paintball or roller skating,” he said.

He said the teens really wanted to learn more about law enforcement, especially with a lot of the social injustices that have occurred between young black men and law enforcement.

Oglesby said it was also an opportunity for them to see that not all law enforcement officers are “bad” and see diversity in careers like law enforcement.

Crime Scene Investigator Victoria Young explained to the group about how she photographs and collects evidence from crime scenes. She let them put their fingerprints on paper plates, powder to dust over them, tape to lift and place on a card.

Ekpene, a Southeast Guilford Middle School student, said he enjoys the activities they take part in and the places they get to travel to and has been a member of the program for two years.

“Police jobs are hard,” Ekpene said of what he learned from being with the officers.

The future doctor said it was kind of hard to see through the impaired vision goggles.

Mary Morrison, who works with community brand at T.E. Connectivity, said Oglesby came to her and said he thought this was a good partnership with the police department.

“We want to help them not make mistakes that some of us adults are still making. I’m glad we chose the Salisbury Police. This was amazing,” Morrison said.

Amir Lundy, 15, recalled when the group first sat down to establish their vision of what they wanted out of the program and learning more about law enforcement was one topic.

Lundy said he was able to learn a little bit about how investigations work.

He said it’s great to have people who are in their corner, “behind you and who will help you. It’s good mentorship training that’s taking us from boys to men.”

Lundy is a student at Eastern Guilford High School.

Travis Covington Jr. said the biggest piece of advice he learned from spending time with the officers was how getting arrested could affect one’s life. He is also a student at Southeast Guilford Middle School.

Barnes said this group of young men are the second round of students who’ve been involved in the program. The previous group, he said, they’ve seen go onto attend some top colleges, play Division 1 basketball and others move onto the NBA.

The students also take part in activities like bowling, attending basketball games as well as activities through the mentorship component.

Some of the students are recommended to the program through guidance counselors, whether they live in single-parent homes, educational struggles or who may have disciplinary issues.

He said community engagement has become a way of life at the department and this is just one example of it.

Officer Matt Benjamin spoke to them about the effects of driving after drinking. He had them tally the cost of a driving-while-impaired charge that could result if they caused damage, killed someone or lost their license.

The group even got to use vision-impaired goggles to walk a straight line and many saw how hard it was to keep one foot in front of the other. A few in the group were allowed to drive a golf cart with Benjamin while they wore the goggles.