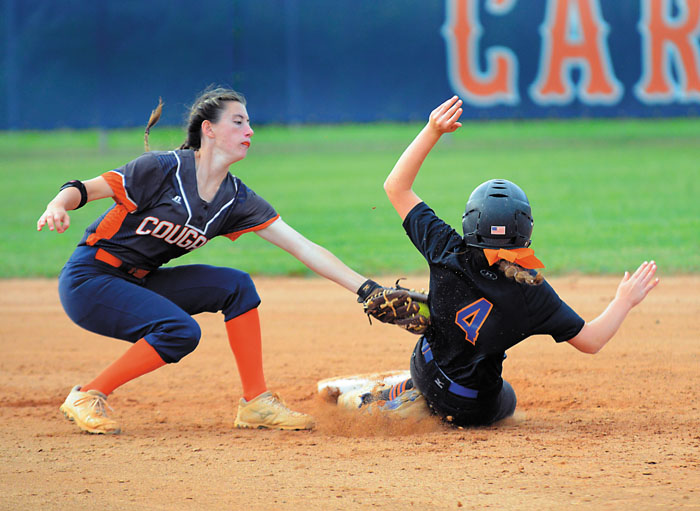 Playoffs: Won four rounds in 3A (all at home) before losing to Alexander Central in regional championship series

CHINA GROVE — Carson softball went from unsettled to unstoppable in a hurry.

But the Cougars caught fire down the stretch in 2018 and rode Rylie Stewart’s right arm and a wave of clutch hits all the way to the regional championship series.

Now the Cougars hope to prove they didn’t just catch lightning in a bottle last May. The task now is proving they’re here to stay.

“The run we had late last season was a great experience for us,” Carson coach Charissa Duncan said. “But it put some pressure on us, as well. This year’s team has different girls and is different team. We’re still trying to find out who we are.”

The Cougars won’t sneak up anyone. That’s for sure.

They’ve undertaken a difficult non-conference schedule to prepare for the North Piedmont Conference, and they’ll get everyone’s best shot after they made a name for themselves last season.  They’re 2-3 in the early going, with all the losses to good teams. Kary Hales saved them against Davie County with a walk-off homer or they’d be 1-4.

“Kary had been struggling in a game with never-ending rain, but all of a sudden she wins it for us,” Duncan said. “Just typical, dramatic Carson softball.”

The basketball team’s recent run to the regional impacted the softball team. Maci Cooper, Ellie Wilhelm and Hales were members of that basketball squad and arrived late for softball.

“All three are potential starters for us,” Duncan said. “They bring a winning mentality.”

In some ways, the Cougars will look the same. Carson returns four girls who produced massive offensive seasons in 2018.

That’s a great core for another strong team. Carson also returns starting right fielder Katelyn McGee and starting center fielder (Cooper). McGee has been one of Carson’s best hitters so far this season, while Cooper excels on the bases and on defense.

Catcher Skyler Smith was an integral part of Carson’s defense last season, but has battled some labrum issues. Sierra Ratliff, who is learning the position, and freshman Makayla Johnson are the other catching options.

Losing Stewart also triggered some defensive changes. Jewell always has been a quality pitcher and she’ll strike out a lot of people, but taking her away from shortstop changes Carson’s defense. Jewell has good range and a cannon at shortstop. Hales’ best position is second base, but she’ll play shortstop when Jewell pitches, with Ellie Wilhelm moving into the lineup at second base.

Carson’s other pitching option is junior Madison Anderson, who also can play in the outfield. When Anderson pitches, Jewell can stay at shortstop, and Hales can stay at second.

Simmerson is set at first base, but the other infield corner, where Jessica Freeze provided excellent glove work last year, is less certain. The candidates are freshman Allie Burns and Ratliff.

Left field, where Haley Howerton usually started last season, isn’t set in stone. Honeycutt, mostly a DP last year, is getting a chance to play in the field. If she’s not in left, she’ll be the DP.  She swings a lethal bat in the middle of the lineup. Her game-winning hit at West Rowan last year turned around Carson’s season.

“We’ve got 16 girls and all 16 are strong players,” Duncan said. “We’ve just got to figure out the best combination defensively. Defense was so critical for us last year.”