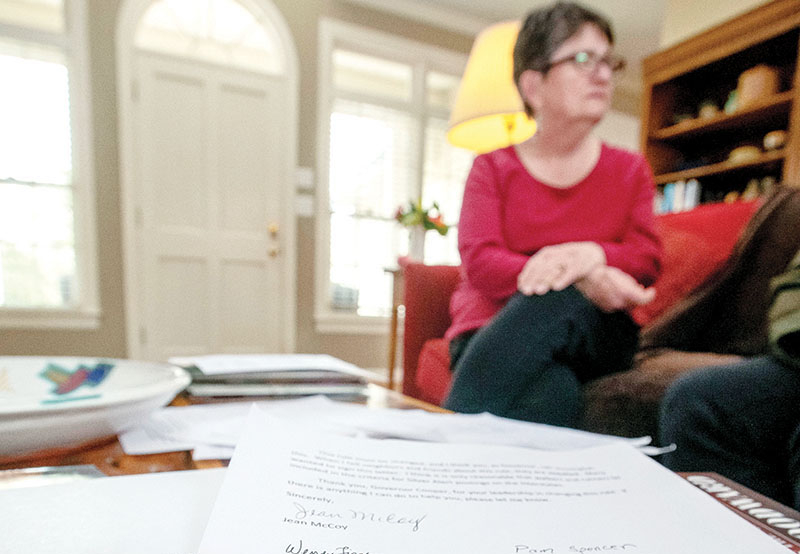 It’s been 34 days since Jean McCoy last saw her husband, Rick Travis, who left their Steeplechase Trail home on a dreary afternoon for a run and never returned.

The 66-year-old former marathoner usually ran the same route two to three times a week out of the Long Ferry Farms subdivision, located off U.S. 29, and then back again.

“I wasn’t at all worried,” McCoy said.

The run would take about 30 to 35 minutes, but on Monday, Feb. 11, after about an hour, McCoy became worried. Her husband should have been home.

She got into her car, drove his route, but never saw him.

McCoy called their neighbors, who also started looking for Travis as well. Still, no one ever found him.

Then, she contacted law enforcement.

The day he went missing, Travis was spotted along U.S. 29, Long Ferry Road and on Interstate 85.

The person who spotted him on the interstate noted Travis was running fast, which is contrary to the speed that he normally ran, his wife said. He was not a fast runner, McCoy said.

“They told me he had to be running an 8-minute mile,” she said.

On that Monday, McCoy was to attend a women’s group meeting, and Travis was going to meet a friend at the Shuckin’ Shack Oyster Bar that night.

McCoy had even helped him review the menu so he’d know what he would order. McCoy said he often had problems reading restaurant menus. So, she pulled up the restaurant menu online.

Since he was a child, Travis had “bad eyes,” McCoy said, and was told he would be blind by the age of 18, but he wore very thick glasses most of his life.

An alert was issued for Travis, who is six feet tall and weighs 157 pounds. He left his home wearing loose, black running pants that were cut off at the calf. He also was wearing a silver rain jacket, black gloves and dark running shoes.

A number of local agencies, including the Spencer Fire Department, Spencer Police Department, Rowan County Rescue Squad as well as with numerous other public safety agencies in and outside of the county, actively searched for Travis, but he has not been located.

Volunteers from as far as the coast joined in the search efforts using K-9 units, drones, helicopters, thermal imaging and, most important, search-and-rescue teams who conducted grid searches.

After a number of days searching with nothing found, responders ended their search.

“This is the longest search that we can recall without finding something. We didn’t find a hat, glasses,” said Fire Division Chief Deborah Horne.

“The community really pitched in and helped, she said”

Travis was seen on security footage from Jerusalem Baptist Church that showed him running at a fast pace.

“He was crisscrossing the road,” McCoy said.

Horne said she hopes people continue to send in tips if they remember something from that day.

“It’s very important to find him because his family knows nothing,” Horne said.

She said responders and searchers did what they could. Now, there’s nowhere else to look.

“He could be alive and not know where he is or who he is,” Horne said.

Volunteers and searchers are still holding out hope, “because we don’t have any reason to give up hope,” she said.

The investigation into Travis’ disappearance now has been turned over to the Spencer Police Department. And Chief Michael James said Travis was last seen was along the northbound lane of Long Ferry Road.

When Travis lost the ability to write checks, McCoy said she knew something was different. Three years ago, he was diagnosed with mild cognitive dysfunction memory loss. Initially, his cognitive impairment was mistaken for depression, McCoy said.

His 92-year-old mother had just died, and his doctors thought he was taking it hard. He began leaving bigger tips at restaurants, sometimes even more than the meal.

Travis’ mother was in an assisted living facility prior to her death. The couple made a payment and within an hour Travis had written another check, this time for $7,000, McCoy said.

Although he wasn’t himself in ways, Travis still had his sense of humor, McCoy said.

He still had one-liners, she said.

McCoy said her husband is a very kind and gentle person who loves to read, usually with the cat in his lap.

He often helped McCoy in the garden and joked to their friends that she forced him to help.

Travis is from Durham, but lived in Rowan County for 23 years. Prior to his disappearance, the two had been married for 38 years. They met while working for the Durham Department of Social Services.

Travis, who is the former Rowan DSS director, was retired.

Now, McCoy says she has good days and bad days and mostly spends her time with their two dogs and cats.

“I take care of what’s within my control,” she said.

As for what happened to Travis, she believes something bad may have happened.

“If he was alright, he would be home,” she said.

Following Travis’ disappearance, McCoy is determined to see changes to the law regarding silver alert descriptions posted to interstate signs.

McCoy wants a stipulation added to the silver alert criteria that will allow message boards to carry descriptive information about a missing person regardless of whether they are in a vehicle or not.

Travis was spotted on the interstate and a description of him on a message board would’ve been helpful for motorists who may have seen him.

McCoy has penned a letter to Gov. Roy Cooper, but is collecting signatures first. She has already collected a number of them and plans to give the letter to the governor once she’s reached a “comfortable amount.”

“I want it changed. Something good needs to come from this,” she said.

It may not help her husband, but McCoy hopes it will help someone in the future.

Tips can be made by calling 1-866-639-5245 or online via tips.salisburyrowancrimestoppers.org