Fiction is about yearning, finding order in chaos 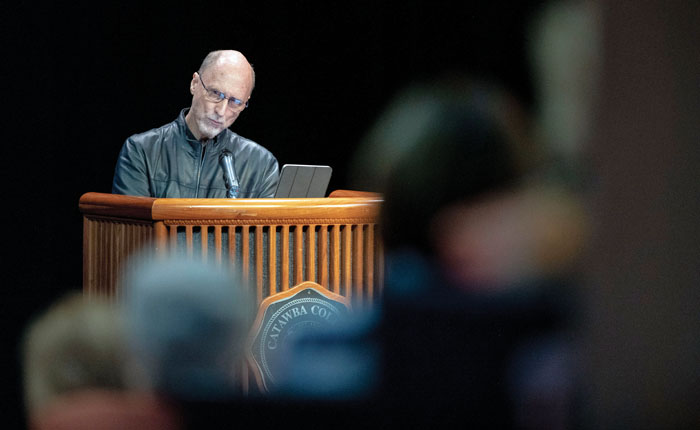 We are all creatures of desire, yearning for something or someone, said author Robert Olen Butler.

Plot, in fiction, is “yearning challenged and thwarted.”

“Literary characters are yearning for a self, an identity, which is true of us all, … Who the hell am I is the question that should be the basis for fiction.

“We are yearning ultimately for self definition,” he said.

Answering questions during the Brady Author’s Symposium, the Pulitzer Prize-winning author bared a little bit of soul and practiced skills that draw people in, making them want more.

There’s no doubt he’s clever and he knows how to use language well. Sometimes the sentences in his books will bring you to a full stop. You will reread and reread before going on. The words are precise, descriptive and well chosen, in short declarative sentences, and in longer ruminations.

He draws on sense memory when he writes, and enjoys finding other paths. His novel, “Hell” is about a television anchorman on the news in Hell. “Out of the elements of entertainment, you get into books — you work with established forms to create something new.”

Butler — call me Bob, he says — is a literary writer. “So much is open to you.” We live in our senses in our body and everything is chaos. “Anything can happen to anybody.”

A literary artist “has deep intuition that behind the chaos is some kind of order.”

We understand in the moment through the senses, he says, then “you begin thrumming to organic wholeness of the object. That’s literary.”

Bob, who was an intelligence officer near the end of the Vietnam War, has studied Buddhism. Though he does not describe himself as a Buddhist, as he talks about writing, elements of Buddhism come naturally.

He won the Pulitzer Prize for his short story collection, “A Good Scent From a Strange Mountain.” The stories feature Vietnamese people who have escaped after the war and are now living in a community in Louisiana. That he can speak in their voices is due to his love for the Vietnamese people.

As a “spy,” he interacted with the real people of Vietnam, not always soldiers or government people. He got to know wood cutters and cooks and families. When his unit stood down, he went to work in Saigon, in the foreign service office. After a long day, he would slip into the alleys of Saigon to meet the real people of the city. He says he “Vietnamesed” himself there. “Everything I know about the human condition, I learned there,” he said. He has returned to the country four times, and he admires its people because they have no bitterness. “They are generous and pragmatic.”

Bob is still teaching creative writing at Florida State University, and years ago produced 17 two-hour sessions, “Inside Creative Writing,” that are available on You Tube. During the sessions, he writes in real time, creating short short stories based on the messages on the back of postcards. He writes, then he explains, in a sort of stream of consciousness — what he calls a trance state.

He has also written a book, “From Where You Dream,” which is about technique. His own is listening to the voice, learning the emotion of it and thinking not just of words, but of what he calls the cinematic effect, the setting, the sounds, the scenery.

But, he says, “none of it is a strategy.” He believes art does not come from the mind, but from the place where you dream.