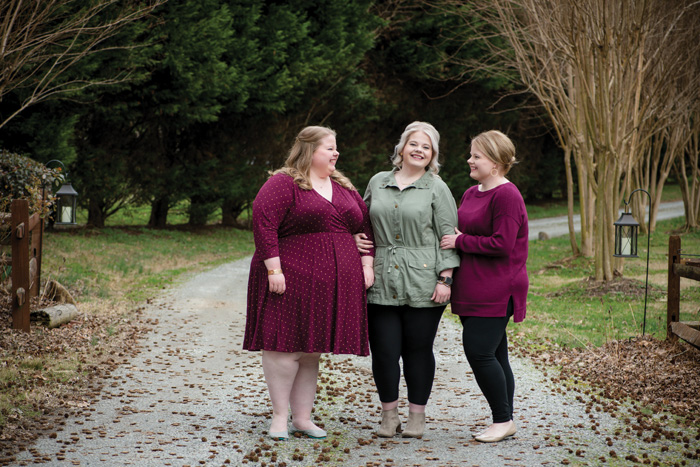 Photo by Wendy Yang Photography. The Lyerly triplets, from left, Megan, Jessica and Katie have struggled with their weight since childhood. All three are nurses at Novant Health Rowan Medical Center. Jessica and Katie chose a minimally invasive operation called sleeve gastrectomy. Megan plans to have the operation in April.

SALISBURY — In the war against obesity, Jessica, Katie and Megan Lyerly are a true triple threat.

The 25-year-old nurses at Novant Health Rowan Medical Center are identical triplets who have battled weight problems since childhood. Now, thanks to one another and bariatric surgery, they’re winning the fight.

“Everybody in my family has struggled with their weight,” said Jessica, who dieted for the first time in fifth grade with her mom. “As long as I can remember, I have been overweight. And for as long as I remember, I loved food.”

Over the years, the sisters bounced from one diet to another — Weight Watchers, keto, paleo, clean eating and more. Some pounds came off, but more came back. Underactive thyroids made slimming even more difficult.

By the time they entered nursing, all three had body mass indexes over 60 — twice the level considered obese. BMI is a measure of body fat based on height and weight.

“I remember thinking this is insane. I was 22, and I was taking blood pressure medicine and had developed sleep apnea,” Jessica said. “As nurses, we see this day in and day out — people who don’t control their weight and their chronic illnesses. And they are like a revolving door in and out of the hospital. I knew I did not want to be that person.”

Packing 400 pounds — 255 more than the normal weight for a woman 5 feet, 4 inches tall — she was the first of the three to turn to bariatric surgeon Eric Mallico for help. Mallico performs about 100 weight-loss operations a year at Novant Health Rowan Medical Center.

So far, he has operated on Jessica, who is down about 200 pounds from her peak weight and 120 since her March 2017 surgery, and on Katie, who has shed about 100 pounds since her operation last February.

Both chose a minimally invasive operation called sleeve gastrectomy. It’s the most popular weight-loss surgery in the nation and takes about an hour under general anesthesia. Through a small incision, doctors remove 80 percent of a patient’s stomach, leaving a banana-shaped pouch that holds just 4 ounces of food.

But that’s just the beginning. The surgery isn’t a cure for obesity, just a powerful weapon in a battle that requires permanent lifestyle changes.

After surgery, patients still have to watch what they eat, but their stomachs hold less food so they feel full faster. They must also move more: A brisk 30-minute walk on most days is what Mallico suggests.

“No matter how great my surgery is,” he said, “if they aren’t bought in, they’re going to fail. These young women are doing better than typical. They’re hitting goals that not everyone hits.”

But he’s not surprised. When family members or close friends get weight-loss surgery together or in tandem and then support each other afterward, they lose as much as 20 percent more, studies show.

The Lyerlys are a close-knit family that loves to have Sunday dinner together. Everyone is on board with the lifestyle changes the triplets have made.

Jessica and Katie share a townhouse. Katie, who does most of the cooking, adapted fast to her sister’s high-protein, low-carb bariatric diet. She also noticed something else as Jessica’s excess weight began to disappear.

“I saw she could do things physically that she couldn’t have done before — exercising and just generally being more active,” Katie said. “She wasn’t being held back by her weight.”

That was just the spark she needed. Katie decided to go for surgery, too.

Following Jessica’s diet gave Katie a head start. Before surgery, all patients begin a bariatric diet and meet with nutritionists. A psychologist screens each one for underlying emotional issues that could affect their success.

“Ultimately, you need to be losing weight so we know you’re making a change in lifestyle,” Mallico said. “Then we do the surgery. If anyone is gaining weight, we’ll keep them in the program, but they’re not having surgery. Once they realize you’re serious, they get on the ship and turn it around.”

“Last February, if you’d told me I’d be almost 100 pounds lighter today, I don’t know if I’d believe you,” she said. “And I just didn’t know how different my life would be.”

Though both sisters’ weight loss has slowed, it hasn’t stopped. And their lives have changed in surprising ways.

“At 350 pounds, you worry, ‘Am I going to fit into the booth at the restaurant?'” Katie said. “‘If I sit down in this chair, is it going to hold me?’ Those thoughts don’t cross my mind anymore.”

Last summer, she, Jessica and their mother celebrated with a trip to Alaska, where they enjoyed climbing, rafting and zip-lining. They can’t wait for their next adventure.

“Now, I feel like I am the girl on the outside who has always felt trapped on the inside of somebody else’s body,” said Jessica, who continues toward her ultimate goal to be under 200 pounds. “I feel like I’m who I was meant to be all along.”

Inspired by her sisters’ example, Megan, who weighed 403 at her first appointment, is preparing for the same life-changing surgery. She hopes to have hers in April — in plenty of time to heal and slim before her Oct. 5 wedding.

“I have already bought a dress, but if it’s too big I will cross that bridge if needed later,” Megan said. “I will be able to enjoy my wedding day and my honeymoon even more with losing weight and living a healthy lifestyle.”

While they’ll always have to work at weight control, the Lyerlys have every reason to be optimistic.

Five years after weight-loss surgery, seven out of 10 patients have kept their excess weight off, according to Mallico. His goal is for every patient to have a BMI below 30.

“You might still be overweight by some definition, but you’re not obese. When you lose 15 BMI points, you pretty much gain 10 years of life expectancy. That’s real,” he said.

When people ask about her weight loss, Jessica tells them surgery was “hands-down the best decision I’ve ever made.”

“I was willing to do whatever it took to lose the weight and get healthy,” she said. “Whatever road you take to get there, the point is getting there.”