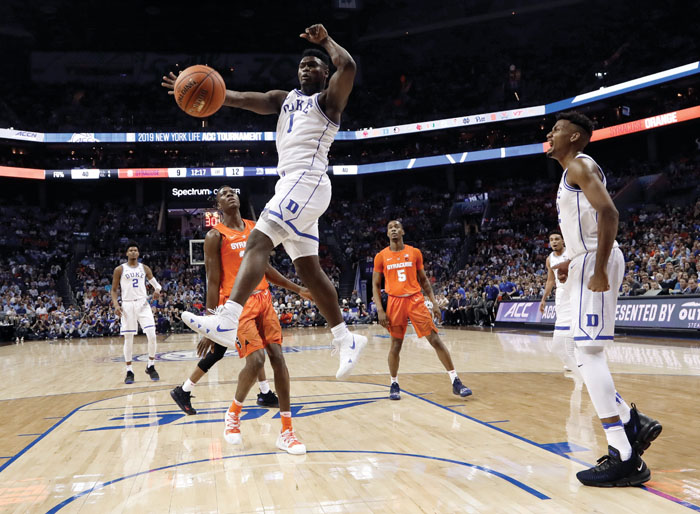 Duke's Zion Williamson (1) reacts after his dunk against Syracuse during the first half of an NCAA college basketball game in the Atlantic Coast Conference tournament in Charlotte, N.C., Thursday, March 14, 2019. (AP Photo/Chuck Burton)

By AARON BEARD AP Basketball Writer
CHARLOTTE (AP) — Just about everything at the Atlantic Coast Conference Tournament on Thursday night was about Zion Williamson.
The Duke freshman’s nearly flawless performance returning from injury had the college basketball world buzzing.
His athleticism, energy, engaging smile and thunderous dunks were all on full display.
And oh yes, so were his modified size-15 Nikes from Boston Celtics All-Star Kyrie Irving’s signature line.
“I couldn’t really tell you specifically if I wanted to,” Williamson said of the shoe modifications. “I just know they’re a little stronger than the regular Kyrie 4s, so I’d like to thank Nike for making these. But yeah, they felt very comfortable.”
And Williamson looked comfortable in them on Thursday night, repeatedly making highlight-reel plays in an 84-72 win against Syracuse. He had an impressive return after missing nearly six full games, going for 29 points on 13-for-13 shooting — the best shooting performance without a miss in the tournament’s 66-year history — with 14 rebounds and five steals in more than 35 minutes of work.
It was a much different look than the last time anyone saw him play in game. Nearly three weeks earlier, he went down in a near split, his right knee sprained and his left foot sticking out the side of what was left of his sneaker. He limped to the sideline carrying the destroyed shoe in his left hand during the opening minute of a Feb. 20 loss to rival North Carolina.
That game, Williamson was wearing the Nike PG 2.5, Oklahoma City Thunder star Paul George’s signature shoe. He had worn them frequently without an issue before the oft-replayed incident that even dealt a day-after hit to Nike’s stock price.
Both sets of shoes typically sell in the $110 to $120 retail range on Nike’s online store, but playing without the 6-foot-7, 285-pound Williamson was even more costly for Duke. Ranked No. 1 at the time, the Blue Devils had been 3-3 with him out of the lineup.
And the shoe company spared no expense in ensuring there was not another incident.
It’s unclear how many pairs of the modified shoes Williamson had on hand Thursday, though coach Mike Krzyzewski made a point of noting that Williamson is rotating pairs of shoes to avoid a repeat of that freak occurrence.
“He alternates the shoe quicker, so you’re not wearing them too many games,” Krzyzewski said, “because the wear and tear I think contributed to that blowout.”
Krzyzewski said Nike sent a group of its representatives to the school after Williamson’s injury.
“Right after the event, they sent their top people out here to figure out what went wrong the next day,” Krzyzewski said. “And then those people went to China to actually look at the making of a shoe that would be very supportive.
“And then they came back within a week with different alternatives to make sure that it was done right. So their immediate great response was appreciated and it was something that we have grown to expect from our relationship with them.”
Duke team spokesman Mike DeGeorge described it as a standard practice for Nike with its partner schools, saying: “In special circumstances, Nike always works with schools to make sure the shoe is right.”
Williamson would qualify as special, with many projecting him as the No. 1 pick in this year’s NBA draft he decides to leave school.
Many involved with Nike were ecstatic about the results.
“We’re thrilled to see Zion returning to the court,” Nike spokesman Mitch Germann said in the statement. “After working closely with the Duke Basketball team to examine the issue, we are confident this was an isolated incident.”
Irving, a former one-and-done star at Duke, was told of Williamson’s fast start after the Celtics’ win against Sacramento Thursday night.
“I don’t think the shoes really make a difference, but I’m happy that he’s in a Nike brand,” Irving said. “He’s a special player. I’m just happy that he has some shoes that won’t deteriorate over time. He was really comfortable in the PGs. He probably wore them a little too many times or whatever the case may be. … I’m just happy he’s out there helping them, playing.”
Now the anticipation is what will Williamson do for an encore.
He and his fellow Blue Devils on Friday night get another shot at the third-ranked Tar Heels, who swept the regular-season series against Duke for the first time since 2009. Williamson barely played in the first game and not at all in the second.
___
AP Sports Writers Steve Reed in Charlotte, and Kyle Hightower in Boston contributed to this report.
___
More AP college basketball: https://apnews.com/Collegebasketball and http://www.twitter.com/AP_Top25
___
Follow Aaron Beard on Twitter at http://www.twitter.com/aaronbeardap

Five games in, here’s what we know about Alliance…