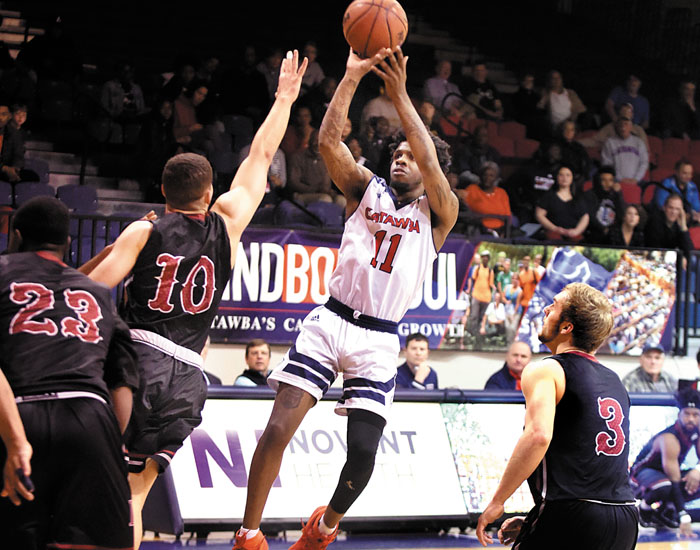 CHARLOTTE — There are times when basketball becomes Haskett-ball for the Catawba Indians.

There are nights when Catawba’s explosive guard Marcell Haskett gets hot, and there’s not much that can be done to stop him. Haskett made six 3-pointers and scored 26 points to lead Catawba to an 80-61 win against UNC Pembroke on Saturday night in a Southeast Regional quarterfinal played at the Levine Center at Queens.

“Haskett was phenomenal, a one-man run, at times,” Catawba coach Rob Perron said. “He doesn’t get many uncontested looks because everyone knows about him and is just hanging all over him. But we freed him up with ball screens a few times tonight and guys helped him by dribbling the ball toward his defender and then kicking it out to him. And he doesn’t need much space.”

Perron has seven solid scorers and never knows exactly who’s going to have a big night. This time the ringleaders were Haskett, Devin Cooper (15 points) and Malik Constantine (14).

Cooper (Ardrey Kell), who had four assists, and Constantine (Olympic) are products of the Charlotte high school and AAU ranks and are playing this regional in their hometown.

Fourth-seeded Catawba (25-7) shot poorly in the opening minutes, but Constantine, who is playing through a knee injury, came off the bench and got the Indians going. He produced a dunk and a 3-pointer as the Indians surged to a 14-9 lead.

“It was the second time in the postseason that Malik has sparked us like that,” Perron said. “He’s playing with a of grit and a lot of emotion.”

Fifth-seeded UNC Pembroke (21-10) got even at 36-all early in the second half, but the Indians didn’t lose the lead. Jeremy McLaughlin stuck back the rebound on Jordan McElveen’s driving miss, and then Cooper made a 3-pointer.

With Catawba leading 41-38, the Indians put together a powerful 14-0 run with two free throws and a 3-pointer by Haskett, another dunk by Constantine, a jumper by Cooper, another 3-ball by Haskett and a dunk by Daquan Lilly. Suddenly, Catawba was up 17 at 55-38 with 12:30 remaining.

“It still wasn’t a lock, but I did feel like we were in the car at that point — and driving it,” Perron said.

While Catawba won by 19, it was far from an easy game.

“Just a game with great physicality — a bar fight,” Perron said. “Neither team got many calls on layups, and you just had to be tough and earn every bucket. We’ve got some long guys and some strong guys and we just kept playing.”

Akia Pruitt scored 18 and David Strother scored 16 for the Braves, who were competing in their third straight regional.

UNC Pembroke, second in the nation when it comes to offensive rebounding, beat the Indians on the glass, but Catawba compensated with a 16-8 edge in the turnover battle. Catawba avenged an early-season overtime loss in Salisbury.

“They out-rebounded us, but they didn’t get that many second-chance points,” Perron said. “We were a little over-anxious and ran too far under the rim a few times, and we missed a few box-outs, but overall I thought we did a good job tonight. We shared the ball well and we defended well.”

Catawba moves on play Queens tonight at 7:30 p.m. in a regional semifinal, with the championship game set for Tuesday. USA Aiken battles Augusta in the other semifinal.

Top-seeded Queens has beaten Catawba twice in tight games this season, but the Indians are looking forward to a third shot at the high-powered Royals.

“When the brackets came out, our guys were genuinely excited,” Perron said. “Queens is really good, but our guys wanted to play them again. If you want to be the best, you have to beat the best, and all that. These games are really important, but this isn’t pressure. This is fun.”