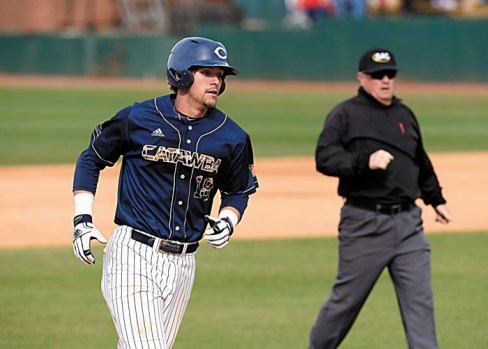 Catawba's Hunter Shepherd going into 3rd base on his homerun. photo by Wayne Hinshaw, for the Salisbury Post 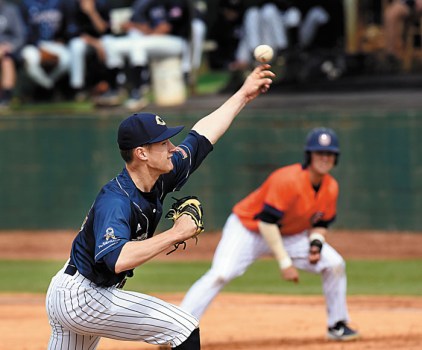 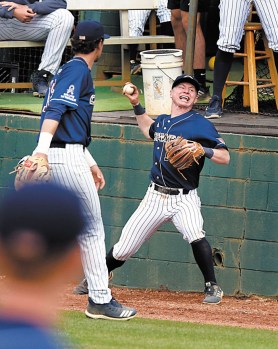 Catawba's Joe Butts 10 catches a foul pop up for an out and throws to the plate to get the CN runner out at the plate.. photo by Wayne Hinshaw, for the Salisbury Post

SALISBURY — A snapshot of Catawba’s baseball season is slowly developing — and so far, Jim Gantt likes what he sees.

The longtime coach watched the Indians win for the fifth time in their last six games on Saturday, when they earned a 5-2 SAC victory against visiting Carson-Newman.

“I’ve liked this team all year, regardless if we win or not,” Gantt said. “They go about it the right way. It’s really a coach’s dream — they work hard, they do what they’re supposed to and there’s no BS. They’re all about the team.”

Fourth-place Catawba (21-7, 7-3) received timely contributions — both at the plate and in the field — from a number of players. Unbeaten left-hander Bryan Ketchie hurled six-plus innings and won his seventh game. Side-slinger D.J. Laxton pitched three innings of scoreless relief to notch a save. Outfielders Jacob Nester and Henderson Lentz thwarted extra-base hits with spectacular catches and second-baseman Joe Butts saved the potential tying run from crossing. His running catch in foul territory and subsequent peg to the plate doubled up Carson-Newman’s John Sharpe, dousing a fifth-inning rally.

“They don’t make mistakes,” losing coach Tom Griffin said after C-N (18-8, 2-4) committed three errors and lost for the fourth time in five games. “You’ve got to play clean baseball and compete on every pitch. We didn’t.”

“We do what we have to do,” said Shepherd, the former Greater Cabarrus Stallions and Rowan Legion left-handed swinger. “I don’t think we’re going to hit a lot of home runs, but we’re a good, sound team when it comes to manufacturing runs.”

If anyone is going to hit the long ball, it’s Shepherd. His towering blast bounced off the upper wall in left-center and tumbled into the woods, providing a 4-1 fourth-inning lead.

“I think that’s three home runs in the last three games for him,” Gantt said, after Shepherd’s seventh round-tripper of the season. “He has the power to hit it out of any park. It’s when they stay away from him here (at Newman Park), he has the ability to drive it out to left. The wind was blowing in from those trees today, so that one had some juice.”

Losing pitcher Greg Valentine, a previously unbeaten right-hander, said Shepherd hit a 1-2 fastball that was out of the strike zone. “I was trying to work a two-seam off the plate,” he explained. “He just extended his hands and got a good barrel on it.”

Catawba reached Valentine for two unearned runs in the bottom of the second inning and went up 3-1 after Morrison’s fly-out to right plated Raper in the fifth.

“I had pulled a ground ball foul just before that,” Morrison said. “I knew I had to shorten up and do my job, get that runner in. So I stayed back and got my pitch.”

Ketchie tired with a 4-2 lead in the top of the seventh. He yielded nine hits — including five to the last nine batters he faced — finishing with five strikeouts and two walks.

“He had command of his fastball,” said Morrison, Catawba’s sturdy backstop. “He always gives you his best, day-in and day-out. He throws the pitches I call. With my trust in him and his trust in me, we’re a good combo.”

Laxton provided the gift of closure. The right-hander allowed two singles, struck out three and initiated a game-ending, 1-6-3 double play.

“The whole team, we’re moving in the right direction,” said Shepherd. “We started out hot, then slowed down a bit. Now we’re catching up and getting where we need to be.”

NOTES: The teams play a double-header at Newman Park today, starting at 1 p.m. There’s no admission charge. … Sharpe had four hits but was caught attempting to steal third base to end the top of the seventh. … Ketchie’s ERA rose to 1.77. Laxton’s dropped to 2.04. … Catawba is 16-3 at home and ranked 15th in the first Collegiate Baseball poll.