Board approves Raiders lease to remain in Oakland in 2019 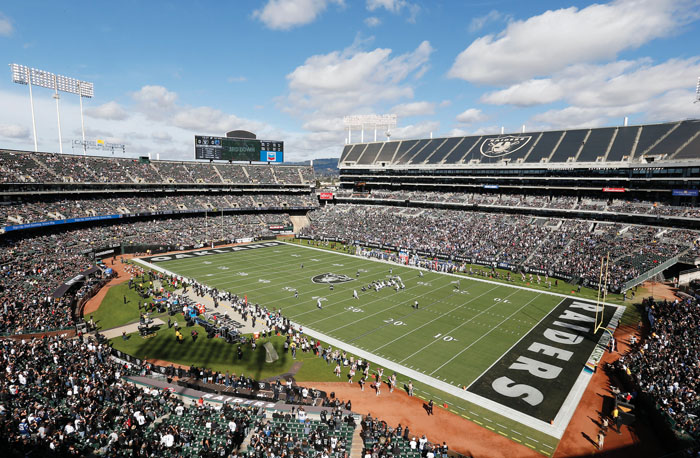 FILE - In this Oct. 28, 2018, file photo, fans watch during the first half of an NFL football game between the Oakland Raiders and the Indianapolis Colts at Oakland Alameda County Coliseum in Oakland, Calif. The Coliseum Authority approved a lease agreement on Friday, March 15, 2019, to keep the Raiders in Oakland for at least one more season. (AP Photo/D. Ross Cameron, File)

By JOSH DUBOW AP Pro Football Writer
OAKLAND, Calif. (AP) — The Coliseum Authority approved a lease agreement Friday to keep the Raiders in Oakland for at least one more season.
The board voted unanimously to approve the lease for 2019 with an option for 2020. The deal still must be approved by the Oakland City Council and the Alameda County Board of Supervisors, but no hang-ups are expected.
The Raiders will pay $7.5 million in rent for the Coliseum and the practice facility in Alameda in 2019 and have a $10.5 million option for 2020 in case their new $1.8 billion, 65,000-seat stadium in Las Vegas isn’t ready by then. The rent will drop by $500,000 each year if the Raiders decide to play one of their two home exhibition games at another site.
The Coliseum Authority will retain naming rights for the stadium and get an additional $750,000 from the team to settle a dispute over parking revenue.
Barring any unforeseen setbacks in Las Vegas, this likely will be the Raiders’ final season in Oakland after moving back from Los Angeles in 1995. The Raiders began playing at the Coliseum in 1966 and were there through the 1981 season before going to Southern California.
New Raiders star receiver Antonio Brown said earlier this week he was excited to be part of the final season in the East Bay.
“For me to be here in Oakland, a part of the Oakland Raiders and be able to be on the last team that’s ever going to be here in Oakland, it’s something special in itself,” he said. “So, it’s pressure in that, it’s excitement in that, and there is a lot that comes with that, and I’m here today ready to embrace all that.”
The Raiders had pulled out of lease extension talks after Oakland sued the team and the NFL over the planned move to Las Vegas. But with the Raiders planning to practice at the facility in Alameda in 2019, staying in the Bay Area was always the top priority.
The Raiders had talks about sharing a stadium with the San Francisco Giants, but that was opposed by the 49ers under territorial rights they have for San Francisco. The Raiders also could have looked into sharing Levi’s Stadium with the 49ers, although owner Mark Davis was opposed to that option.
The NFL needed to get a final answer on where the Raiders will play this season in order to put together the 2019 schedule, which is expected to be released in April.
___
More AP NFL: https://apnews.com/NFL and https://twitter.com/AP_NFL