Robert Olen Butler: Making good use of his compost heap 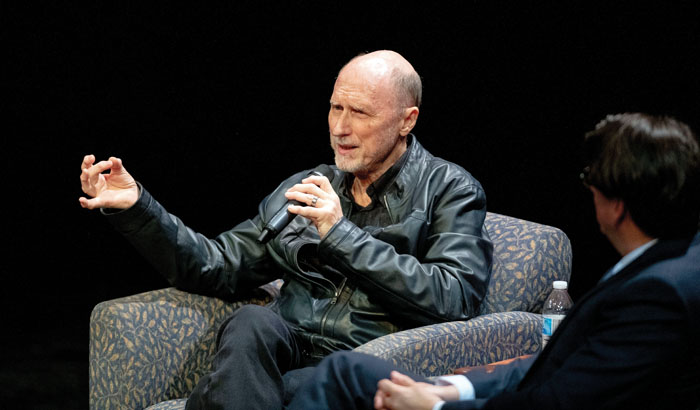 SALISBURY — Author Robert Olen Butler relies on his compost heap, where much of his past lies percolating — some things lost, some ideas just waiting for the spark that will ignite them.

Speaking at the 33rd Brady Author’s Symposium at Catawba College on Thursday, Butler shared his passion for literary writing, the fun in entertainment writing and a lot about how his brain works.

And he was fascinating. He got a bit cerebral at times when answering questions, but listening to him was an education from a master of words and thought.

Associate Provost Forrest Anderson, who helped Butler archive many of his writings, provided a thorough introduction full of memories.

Butler began the lecture by reading two short stories that were commissioned by magazines.

The first, “Banyan,” was in Granta magazine, with the theme nature. Butler created a dying man flashing back to his time in Vietnam, seeing the bar girl he had slept with; feeling guilty about his wife and missing his wife, who has been dead for years; hearing rifle fire, feeling pain clench his chest; being alone; crawling outside to lie against the huge live oak in his yard, pain firing down his arm. He describes the tree as a “live oak jaundiced with the security light.”

Then, his mind is back in Vietnam, where he’s running from gunfire, sure he’s going to die. Then, a banyan tree appears before him. The huge banyan tree is a fig that begins life as a plant that grows on another plant, a seed that germinates in a crack in another tree, then overtakes it.

In the story, the man imagines being absorbed into the banyan and feels the grip of intense pain with the bark of the live oak against his back.

Butler is teary when he finishes reading.

The second story wells tears in the eyes of even more people at the lecture, as he reads about a man who is absent from his mother when she dies, suffering from a broken hip and dementia. Butler uses the sound of a Bach adagio and the dream world of Van Gogh’s “Starry Night” to describe the mother.

And then the story turns practical. The man served in Vietnam, as Butler did, interrogating the “enemy.” He learns his mother is awakened every two hours in the nursing home to check her diaper. He remembers waking up suspects in Vietnam every hour to wear them down physically and mentally. When he learns his mother has died, he remembers the last thing she said to him — just his name, Kenny. But what he hears is — “Don’t go.”

For Butler, the voice starts the story process. “But I have to get into its head.” Fiction is about human beings, human feelings and language, and it exists in time. “It’s a temporal thing,” he said.

In explaining the two stories, he said they started with an abstraction — nature, for the first story, and in absentia for the second. “I threw out the abstraction” and went to the compost heap, relying on sense memory to kick in, he said. Butler’s mother died with dementia, but she is not the woman in the story.

Butler also speaks of thrumming. The thrum of an idea. Tuning in to the thrum expands the world. Making order from the thrum, from the senses, is art.

When a writer hears the thrumming, Butler said, he needs to edit the strings “so you will thrum in harmony.”

Literary criticism, he says, has its place, but literature students should not read for analysis all the time.

“If I’ve made you do that, I’ve destroyed your ability to enjoy reading as art,” he said.

On Thursday, Butler, who worked in intelligence during the Vietnam War, answered a reader who asked if writing was “medicinal” for him. He was not at the front during the war, not worrying about being shot or blown up. He worked in an office interrogating people, then in Saigon. He spent time in the country, meeting wood cutters and farmers and ordinary people. He thrummed to the night life of Saigon, to the unfailing politeness of the people and to their gentle nature.

“Everything I know about the human condition, I learned there,” he said.

Butler’s writing is often poetic, his sentence structure varied and compelling, his imagery to the point.

When asked how much research he does for a book, he admitted much of what he has written has been of his own experience, but he is meticulous about what defines a time.

“Until you’re in command of your own compost heap, don’t venture beyond it,” he said.