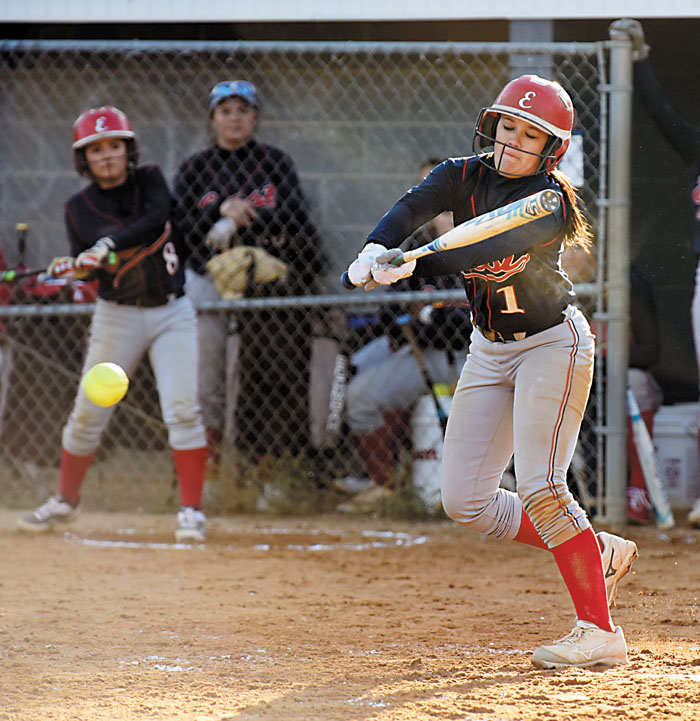 Wayne Hinshaw file photo/for the Salisbury PoST ... East Rowan’s Maddie Trexler (1), shown during last season against West Rowan, returns to be among the leaders of the Mustangs’ team this year.

Coach: Mike Waddell, has been around since East made the transition from slow-pitch to fast-pitch softball in 1996. He coached teams that reached the Final Four in 3A in 2010 and 2011.

Playoffs: Lost to Cox Mill, first round 3A

GRANITE QUARRY — East Rowan will be better than it was in 2018.

That’s a given. East had a one-player senior class  in 2018 and lost that player, shortstop Caroline Johnson, for the season on a disastrous slide into home last March 27.

Johnson was tearing covers off softballs and was batting .500 when she was hurt at South Iredell in East’s 11th game. East was 7-3 when it headed to South Iredell and had already beaten West Rowan, but then it had to play the last 14 games without Johnson, and things weren’t the same.

“We were snake-bit in the South Iredell games,” East coach Mike Waddell said. “We could’ve won both, but we let them get away. We lost Caroline in the game there.  Then when we played them at home we built a nice lead, but then we had one inning we couldn’t get out of.”

Ashlyn Fritz and Izzy Schroeder are two more returning starters, and East has added promising freshmen to the mix.

“We’ve got 15 on the roster,” Waddell said. “We don’t have enough girls for a jayvee team, but we’ve got enough to push the starters.”

Trexler, the senior center fielder, and Sprinkle, the senior catcher, should be trouble for East’s opponents at the top of the lineup. They combined for 49 runs scored a year ago. Both are difficult to strike out and they provide some pop. Trexler had 13 extra-base hits, while Sprinkle smacked two homers.

Samples, the junior right fielder, had a terrific sophomore season with two homers, a .391 batting average and 22 RBIs.

Strange, a sophomore, and Teague, a junior, shared East’s pitching duties a year ago, but they also can hit. Strange batted .406 with three homers and 23 RBIs. Teague didn’t hit for a high average but contributed two homers and 15 RBIs.

Freshman Emma Walker gives East a third option for the circle, and she also can swing the bat.  Walker can play first base or third base. When Walker pitches, Teague probably will be at first base, with Strange at third.

“It’s a little bit of musical chairs,” Waddell said. “But with Emma able to play either corner, we’ll be able to get all three of them in the lineup together a lot.”

Schroeder slides over to shortstop after starting as a freshman at second base. She has a good glove. Expected to handle second base this season is freshman Mac Misenheimer.

Fritz will be a regular in left field. She contributed 11 RBIs a year ago and was one base hit away from hitting .300.

Junior Caroline Houpe is athletic and is a versatile player who can handle multiple positions. Senior Nicole Fleming is experienced and can play both infield corners.

Senior Carmen Fraley, who can drive a golf ball a long way, is making a softball comeback. Her best position is third base.

East  has depth in the outfield with  junior Erika Lloyd and freshmen Tiffin Jacobs and Emily Davis.

Strange homered and had six RBIs on Wednesday as the Mustangs scored 11 runs and slugged their way to a win at Northwest Cabarrus.

East should have the bats to swing it with rivals Carson and West Rowan, but the key to taking a step forward and contending in the NPC is going to be more consistent pitching. That could happen. East is counting on two freshmen starters, but overall the team is much more seasoned than a year ago.

Waddell says he’s “cautiously optimistic” that the Mustangs will be as well.