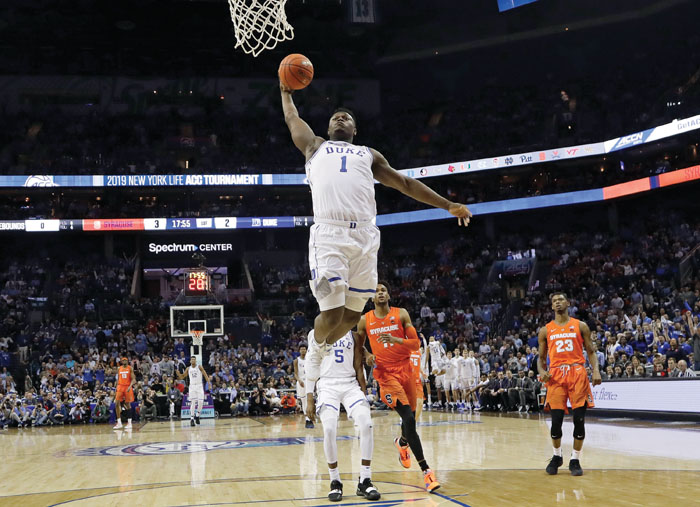 Duke's Zion Williamson (1) goes up to dunk against Syracuse during the first half of an NCAA college basketball game in the Atlantic Coast Conference tournament in Charlotte, N.C., Thursday, March 14, 2019. (AP Photo/Chuck Burton)

By STEVE REED AP Sports Writer
CHARLOTTE (AP) — Zion Williamson said he never listened to the analysts who suggested he should forego the remainder of his college career at Duke and focus on the NBA.
“I knew I was going to be back,” Williamson said. “Everybody has their right to their own opinion, but I knew I was coming back the whole time.”
With each soaring dunk Thursday night, Williamson sent a resounding message to the rest of the college basketball world that he is back — and so are the Blue Devils.
In his first game since a bizarre shoe blowout caused him almost six full games with a sprained knee, Williamson was electrifying, breaking a 66-year-old Atlantic Coast Conference Tournament record by going 13 of 13 from the field — with five soaring dunks — and scoring 29 points to propel No. 5 Duke over Syracuse 84-72.
“He was himself,” Duke coach Mike Krzyzewski said of Williamson’s return.
Syracuse coach Jim Boeheim went a step further, calling Williamson a “different player” than he’s ever seen in his 50 years of coaching college basketball.
He said Williamson is a stronger version of Charles Barkley and unstoppable in the low post.
“He can do things that nobody has done in this game,” Boeheim said. “I mean Charles was close, but this guy’s bigger, stronger. And I mean he’s a crazy different type of player. There aren’t guys like him.”
The Associated Press player and newcomer of the year in the ACC added 14 rebounds, two assists and a block.
Williamson’s night got off to a rousing start two minutes into the game when he stole a pass and drove the length of the floor before cocking his right hand back and throwing down a highlight-reel dunk that brought the crowd to its feet. He added three more soaring dunks in the first half — including one off an alley-oop pass from Barrett — and finished the first half with 21 points on 9-of-9 shooting and nine rebounds as Duke built a 34-28 lead.
Williamson said he wasn’t trying to make a statement on his initial dunk, but only trying to help his team set the tone on defense. He also chuckled at the notion that his return was perfect, citing his 2-of-9 performance from the foul line.
“I couldn’t really throw a tennis ball into the ocean with my free throws, so I wouldn’t say perfect,” Williamson said humbly.
Williamson, who wore modified Nike Kyrie 4’s this time specifically designed to lend extra support to his 6-foot-7, 285-pound frame, said he felt fine physically and three appeared to be no lingering knee issues.
He cracked a smile several times throughout the game, clearly enjoying being back on the floor.
He said he never felt rushed by coaches to return to the court, and knew earlier this week he was ready to play after practicing with the team.
“I wanted to be out there every game,” Williamson said. “You see me, I see my brothers out there battling and I just wanted to go to war with them.”
RJ Barrett added 23 points and six rebounds to help Duke (27-5) set up a semifinal showdown with No. 3 North Carolina. The Tar Heels swept both games from the Blue Devils in the regular season, with Williamson injured in the first minute of the first meeting.
Williamson, barring injury, will get his first real chance to play in a North Carolina-Duke rivalry game.
Frank Howard scored 28 points, and Buddy Boeheim had 15 for Syracuse (20-13).
Despite Williamson’s highlight-reel display, the Orange were in it until the end without leading scorer Tyus Battle, who missed his second straight game with a back injury. Syracuse tied it with 13 minutes remaining on back-to-back 3-pointers from Boeheim.
But Duke wore down Syracuse down the stretch between the inside game of Williamson and the shooting of Barrett, who punctuated the win with a windmill dunk with 1:14 remaining. Tre Jones added 15 points and eight assists for Duke.
BATTLE TESTED
Boeheim said he expects Battle to return to practice on Saturday, adding that he still had swelling in his back and there was no way he could have played against Duke. He is optimistic Battle will be ready to play in the postseason.
BIG PICTURE
Syracuse: Boeheim said the Orange are better than last year and facing three top five teams in the ACC has given them great experience heading into the tournament.
Duke: The Blue Devils are in contention for a No. 1 seed in the NCAA Tournament. Williamson’s return looks likely to help by making the Blue Devils look more like the team that spent a national-best seven weeks at No. 1 in the AP Top 25 poll.
UP NEXT
Syracuse: Will await word on an NCAA Tournament berth.
Duke: Will face No. 3 North Carolina for a third time in the semifinals. The Tar Heels won the previous two games — 88-72 on the road and 79-70 at home.
___
More AP college basketball: https://apnews.com/Collegebasketball and http://www.twitter.com/AP_Top25