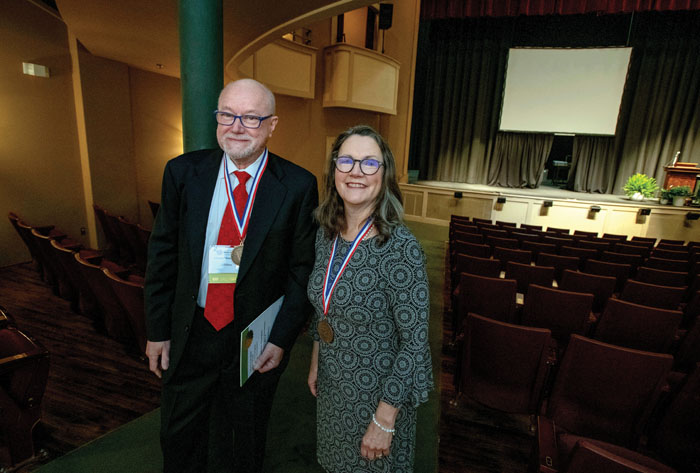 Gianni Moscardini and Diane Young were both awarded the N.C. Main Street Champion awards on Thursday morning The last day of the conference ended with the awards of the Main Street Champions in which two Salisburians received awards. Jon C. Lakey/Salisbury Post

SALISBURY — As the N.C. Main Street Conference wrapped up Thursday, Gianni Moscardini was named Salisbury’s Main Street Champion in recognition of his service to revitalization efforts.

Moscardini, a Downtown Salisbury Inc. board member, owns two restaurants and a brewery — La Cava, New Sarum and Salty Caper. He was honored for his “entrepreneurial spirit and decades of dedication.”

Diane Young, who is also a DSI board member, was named Main Street Champion for Concord after leading the Concord Downtown Development Corp. She and her husband, Michael, were previously honored as champions of Salisbury.

Moscardini said receiving the award is an absolute honor and he’s trying to do the best he can for Salisbury. Young called it a moment she wanted to bottle up and enjoy.

Larissa Harper, executive director of Downtown Salisbury, spoke about the value of honoring people who do the work in their communities.

“Main Street Champions are those tireless volunteers in a community that just have a passion for downtown revitalization in any form whatsoever,” Harper said.

This year, the recognition is especially rewarding for Moscardini, who said he feels that Salisbury is on the cusp of becoming a focal point in the region. Young agreed and said that’s why they have put so much time and effort into downtown Salisbury.

“We’re the heart of the community, and we just want it to be the best that it can be,” Young said.

Young, who was a conference volunteer, said those who attended the conference saw Salisbury shine.

“We had more and more comments from people — exhibitors, sponsors, attendees — (about) just how friendly and welcoming the community is,” Young said. “And we know that, but you oftentimes don’t hear that.”

Harper said throughout the conference, participants were looking at Salisbury as an inspiration to take ideas for economic development and revitalization back to their hometowns.

“I had (someone) walking down the sidewalk with me saying ‘Wow, we want our downtown to be like downtown Salisbury,’ and I heard that from a lot of others,” Harper said. “And this is part of what Main Street Conference brings, is that you get to visit other towns and cities, share ideas and go back to your own community and implement the things that your community wants and needs in their unique way.”

Salisbury was previously a host of the N.C. Main Street Conference in 2013. Some returners were able to see the changes and accomplishments in the city over the past six years.

Liz Parham, director of the N.C. Main Street and Rural Planning Center, commended Salisbury, which is an original member of the Main Street Program going back 39 years. This year’s conference had the highest attendance in its history, bringing about 750 people to Salisbury.

Participants saw the impressive theater scene, the Empire Hotel redevelopment project, upper-story residential development, and the city’s history, Partham said, with ideas to take back to their communities and figure out a way to replicate them.

Harper said Salisbury residents have spent years getting the city to this point of being an example for Main Street cities across the state.

“It’s taken groups of people who have worked hard about their passions in order to provide all that we have in this size city,” Harper said. “They should all get honors. All these people who have worked for decades to improve the buildings and to have art galleries and the sculpture show and make sure our architecture is historic, they’re all Main Street Champions, in my eyes.”

Next year’s N.C. Main Street Conference will be in New Bern, where the Main Street Program will celebrate 40 years.