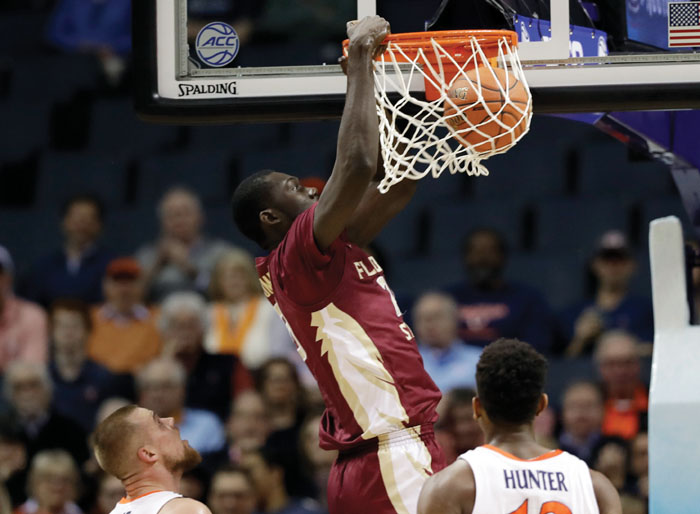 By STEVE REED AP Sports Writer
CHARLOTTE (AP) — Florida State coach Leonard Hamilton said his team’s goal this season has been to establish itself among the hierarchy of the Atlantic Coast Conference largely dominated the past several years by Duke, North Carolina and Virginia.
While that has been a challenging task for what he called his “unknown team,” the 12th-ranked Seminoles took a big step toward gaining some national notoriety on Friday night with 69-59 win over No. 2 Virginia.
David Nichols scored 14 points as the Seminoles (27-6) advanced to the championship game of the Atlantic Coast Conference Tournament for the first time since 2012. Phil Cofer had 11 points and 7-foot-3 center Christ Koumadje added nine points and nine rebounds for the Seminoles, who’ll play the winner of No. 3 North Carolina/No. 5 Duke on Saturday night.
“Sometimes you may not get the proper respect,” Hamilton said. “But one thing about respect is you have to go earn it. And hopefully this gives us a little bit more respect.”
Meanwhile, the Charlotte jinx continued for the boys from Charlottesville.
The Cavaliers loss comes on the same floor where they became the first No. 1 seed in the NCAA Tournament to lose to a 16 seed in Maryland-Baltimore County last year. It’s also the same court where Virginia lost a second-round game as a No. 2 seed to seventh-seeded Michigan State in 2015.
Virginia coach Tony Bennett tried to keep that in perspective, saying, “I got to live out my dream of playing in the NBA (in Charlotte), I met my wife here, and we got to play a good game Thursday — so I think I’m pretty blessed.”
De’Andre Hunter had 13 points for Virginia (29-3), which had its nine-game winning streak snapped and suffered its first loss to a team other than Duke.
Florida State was in control from the start.
The Seminoles built a 35-31 at halftime behind the inside play of Koumadje, who had seven points and nine rebounds in the first half after registering just two points and two rebounds in a 65-52 loss to Virginia earlier this season.
The 35 points were essentially an offensive explosion for the Seminoles, who didn’t score their 35th point against Virginia until 2:34 remained in the previous matchup.
Florida State broke open the game midway through the second half with a 13-1 run led by Nichols, a graduate transfer who scored on a drive, a low post move, and a turnaround jumper during the stretch. While Nichols was heating up, the Cavaliers couldn’t score, going nearly 6½ minutes without a field goal.
Virginia’s Kyle Guy said Florida State’s length and athleticism proved to be an issue.
“It did disrupt us a little bit, and we’ll watch the tape and I think it was very evident what we needed to fix and we’ll be ready come next week,” Guy said.
JEROME STRUGGLES
Ty Jerome had another tough outing in Charlotte, shooting just 4 of 13 from the field and 2 of 9 from 3-point range.
But he’s staying positive about the future.
“I remember we cut down the nets in the ACC tournament last year and we still didn’t like the way our season ended,” Jerome said. “So this isn’t the end all, be all by any means.”
DEFENSE WINS
Florida State only forced eight turnovers, but it made things difficult for the Cavaliers to get into a rhythm all night long.
“Just ball pressure, being able to just get down and dirty on defense and the main thing with us is our junkyard defense and we kind of take it in each and every practice,” Cofer said. “Being able to just have high hands, long arms, a lot of times try to get steals and deflections, and those are the main things that win games for us.”
BIG PICTURE
Florida State: The Seminoles are one of the hottest teams in the country, having won 14 of 15 games with the only loss during that stretch coming at North Carolina. They have shaken off some early season injuries and will be a tough out in the NCAA Tournament.
Virginia: The Cavaliers have only lost three games all season — two of those to Duke — so it stands to reason they still have a chance at earning a No. 1 seed in the NCAA Tournament.
UP NEXT
Florida State: Will look for its first ACC Tournament title since 2012.
Virginia: Will wait to hear on where they are seeded in the NCAA Tournament.
___
More AP college basketball: https://apnews.com/Collegebasketball and https://twitter.com/AP_Top25