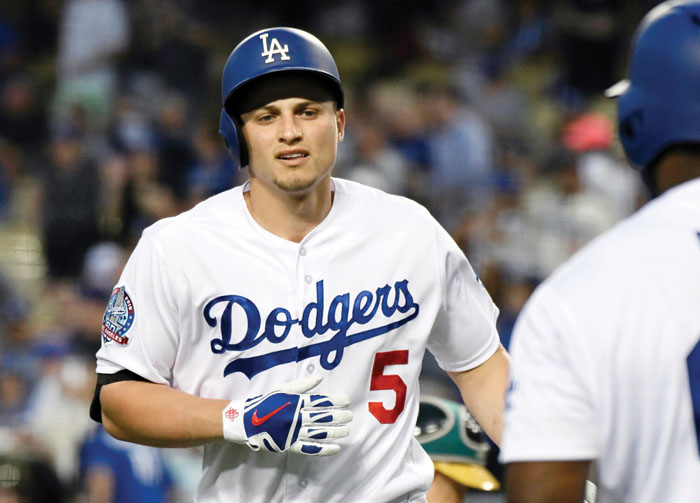 GLENDALE, Ariz. (AP) — Corey Seager played shortstop in a game for the first time since April 29, three innings for the Los Angeles Dodgers in a minor league exhibition.

The 2016 NL Rookie of the Year had surgery May 4 to repair a torn ulnar collateral ligament in his right elbow and arthroscopic surgery on Aug, 7 to repair his left hip.

He struck out twice and fielded one ball Thursday, an infield single. Although the runner was going to be safe, Seager completed the throw.

“It was good, didn’t hesitate, didn’t think about it, just kind of did it,” he said.  “I wanted to finish it, kind of check that off the list.”

Seager, from Kannapolis and Northwest Cabarrus High School, had three plate appearances in a minor league game Monday but did not play the field.

“It was nice to move around,” he said. “It has been a long time. It is weird. You try to find your timing. For the most part it was a lot smoother than I expected.”

Los Angeles has not projected whether he will be available for the opener against Arizona on March 28.

“It’s about building up innings at this point,” Seager said.

The left-handed Seager’s last at bat, against a right-hander, lasted eight pitches.

“At this point, I’m not really worried about the outcome,” he said. “That was maybe my ninth AB. I’m still trying to get comfortable in the box.”

NOTES: LHP Clayton Kershaw threw a 31-pitch bullpen session to Russell Martin as manager Dave Roberts looked on along with pitching coach Rick Honeycutt, president of baseball operations Andrew Friedman and other staff. Kershaw threw some offspeed pitches. He had been was limited to 20 pitches, all fastballs, on Monday in his first bullpen session since Feb. 20. The three-time Cy Young Award winner has been slowed by left shoulder discomfort.

WEST PALM BEACH, Fla. (AP) — It might seem as if Juan Soto has a big hole to fill in the Washington Nationals’ lineup, what with Bryce Harper gone.

Soto is not the sort to worry about that type of thing, though. Last season’s surprise runner-up as NL Rookie of the Year at age 19, he’s carefree and self-believing as can be, by all accounts.

Which is good, because he could very well be the No. 3 hitter for Washington, counted on to make the offense go. Everyone around Soto seems to think he’ll be up for whatever challenges Year 2 brings.

“He’s as ready as you could possibly be at, shoot, 20 years old,” Nationals closer Sean Doolittle said Thursday, before Soto homered for the second consecutive exhibition game. “He has a very mature approach — the way he prepares. He loves doing all the work behind the scenes. He’s always in the cage or in the weight room. Keeps his head down. He’s a quiet guy, by nature, and he doesn’t seek out the spotlight.”

Young as he is, Soto sounds like an old soul, speaking about the “process” of spring training during his first taste of big league camp — he started last season, believe it or not, at low-A ball — and getting ready for the regular season “step by step, every day.”

Asked whether he can improve on what he showed last year, Soto crossed his arms and replied: “My approach with that is: just the same.”

The Nationals certainly would take more of the same.

Soto made his debut last May after all of eight games at Double-A and he hit .292 with 22 homers, 25 doubles and 70 RBIs in only 116 games. He walked a whopping 79 times, helping produce a .406 on-base percentage. His slugging percentage was .517. His three multihomer games were the most by a teenager in big league history.

“I don’t see any difference from where he was last year to where he is this year. If I had to say anything, maybe a little bit more confident, that he knows he belongs here,” manager Dave Martinez said. “And that’s a good feeling.”

No one is too worried about Soto’s hitting. The two key areas that need shoring up: defense and baserunning.

Martinez knows it. So does Soto, who learned left field on the fly in Washington a year ago, having played only seven games there in the minors, where he usually was in right or center.

Every morning in Florida, Soto said, he puts in extra work with his glove.

“It was almost borderline unfair that we put him out in left field, but it was by necessity,” general manager Mike Rizzo said. “What he has shown us, in so many different ways, is the mental maturity and the outstanding makeup of a superstar player. And he is not satisfied.”

The quality that stands out to everyone is Soto’s discipline at the plate, something he began honing at the prompting of a hitting coach in the minors.

“He doesn’t swing unless it’s a strike. That’s pretty impressive. Pretty hard to do at the highest level when you’re a teenager,” Nationals shortstop Trea Turner said.

Turner thinks that skill will help Soto “counteract” whatever adjustments opposing pitchers make when facing him this season.

“We saw last year that his approach at the plate is really, really advanced. You don’t see him over-swing and get outside of his mechanics and try to do too much,” Doolittle said. “You see him use the whole field. You see him really dial it in with two strikes. It lends itself to giving himself a good chance to follow up and pick up where he left off. I’m excited to see what he does next.”

Only half of Clemson D linemen work out for…