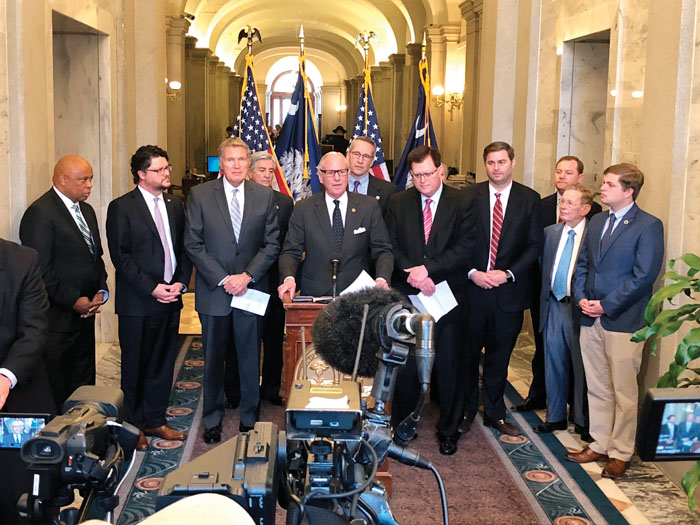 South Carolina Gov. Henry McMaster stands with several legislators to talk about the states efforts to get the Carolina Panthers a new practice facility, Wednesday, March 13, 2019, in Columbia, S.C. Lawmakers will try to pass a bill making football players full-time workers under state law so the Panthers could get t tax credits. (AP Photo/Jeffrey Collins)

COLUMBIA, S.C. (AP) — South Carolina wants the Carolina Panthers to move their practice facility into their state’s suburbs. But there is at least one big hurdle — football players don’t practice enough hours to be considered full-time employees in the state, so South Carolina can’t offer the Panthers tax credits and other incentives.

Gov. Henry McMaster and legislative leaders said Wednesday they will push for a bill to exempt football players from the rule.

McMaster and a number of top state officials and lawmakers met with Panthers owner David Tepper at the South Carolina Governor’s Mansion and Tepper said he was very interested in what South Carolina had to offer, McMaster said.

No deal was finalized.

Tepper has said since buying the team last summer that a new indoor practice facility is a priority. The Panthers currently practice outside near Bank of America Stadium in Charlotte, North Carolina, and had to move several late-season practices to a ballroom because of rain.

Several South Carolina lawmakers spoke as if the proposal to move the practice facility and team offices to a new complex that could include a sports medicine center, restaurants and hotels was a done deal.

But Tepper was not at the news conference Lucas, McMaster and other officials held at the capitol after the meeting. The team didn’t have any immediate comment on its plans.

It also wasn’t clear whether Charlotte or North Carolina might make a counteroffer to keep the facility and offices.

“We’re not concerned about that. We are thinking about South Carolina,” McMaster said. “We know we can outrun anyone on the field.”

The state and Tepper have not settled on any potential site, considering areas in York County and Lancaster County, all about 20 miles (32 kilometers) south of Bank of America Stadium.

COSTA MESA, Calif. (AP) — The Los Angeles Chargers didn’t have many glaring offseason needs but upgrading the linebacking unit was at the top of the list.

Davis comes to the Chargers after spending his entire 14-year career with Carolina, where he was the Panthers’ career leader in tackles (1,077). He will enter the season second among active NFL players in tackles.

Davis finished second last season with 79 tackles in 12 games. He missed the first four games while under suspension for violating the league’s policy on performance-enhancing supplements.

Davis’ addition gives the Chargers experience and an effective run stopper. Denzel Perryman, Jatavis Brown and Kyzir White combined to start 25 games but ended up on injured reserve. Perryman, who led the team in tackles at the time of his injury, was the team’s most effective run stopper the first half of the season. He was due to become a free agent but re-signed with the team on March 9.

The Chargers struggled to stop the run late last season. They contained Baltimore in the AFC wild-card round by going with eight defensive backs but allowed 155 yards in a loss to New England in the divisional round.

Taylor gives the Chargers an experienced backup to Rivers, who has started 208 consecutive games and is tied with Peyton Manning for the third-longest streak in NFL history by a QB.