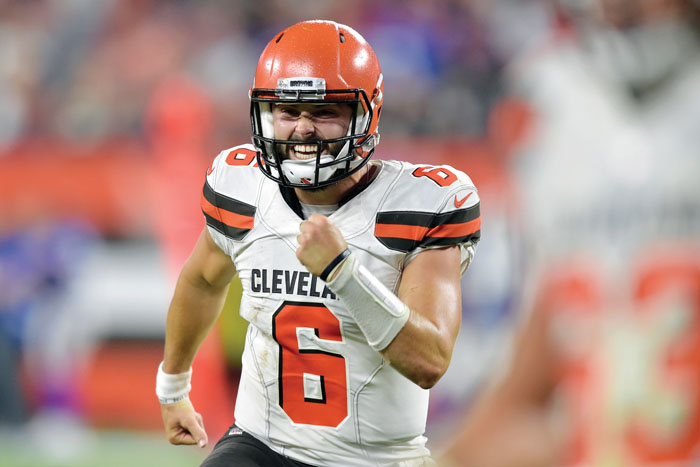 CLEVELAND (AP) — The Cleveland Browns returned as an expansion team in 1999. They became a real one Tuesday night.

It only took 20 mostly tortuous years — and one tremendous trade.

With a shocking, blockbuster deal for superstar wide receiver Odell Beckham Jr., the Browns flipped the NFL on its helmet and instantaneously changed their national perception. They’re the talk of the league, and for the first time in forever, it’s for the right reasons.

No longer a punching bag, the Browns are punching back. From hopeless to hope-filled. Finally.

Shortly after the league’s free-agent signing period and its new calendar year opened on Wednesday, the Browns made their acquisition of Beckham from the New York Giants official. It’s a done deal, and it’s starting to sink in for Cleveland’s impassioned and pained fan base, which has been waiting decades for its beloved football team to return to glory.

The Browns acquired Beckham and defensive end Olivier Vernon in exchange for guard Kevin Zeitler, safety Jabrill Peppers, a 2019 first-round pick (No. 17 overall) and a third-rounder (No. 95).

Beckham makes Cleveland cooler, the Browns a must-watch on TV, and in the words of quarterback Baker Mayfield, “dangerous.”

In landing Beckham, one of the game’s most electrifying players, Cleveland has risen from unimaginable depths in just a year. The Browns were coming off a historic 0-16 season last March, still searching for an elusive franchise quarterback and were prepared to enter the 2018 season with coach Hue Jackson, who had guided them to a 1-31 record over two seasons.

They were the league’s laughingstocks. General manager John Dorsey has turned the tables. He began strategically plotting a run at Beckham in December, and seemingly came out of nowhere to deliver a blindside blow.

“He’s probably if not the one, one or two best receivers in the National Football League,” Dorsey said. “Very rarely do you get a chance to acquire a player of this magnitude. He’s at a relatively young age. He’s got a lot of football left in him. Great hands, great work ethic, committed, competitive, he really wants to be great. And that’s all you can ask for.”

The Browns are loaded with young, exciting players who may do more than contend for a playoff spot next season, and could one day take Cleveland to its first Super Bowl.

Moments after news of the trade agreement broke Tuesday, the odds in Las Vegas for the Browns winning the Super Bowl fell from 25 to 1 to 14 to 1.

The three-time Pro Bowler, who can turn a short catch into a long gain, gives Mayfield an almost matchless weapon. He has amassed at least 1,000 yards receiving four times, the exception being an injury-shortened 2017 season. Last year, after signing a five-year, $90 million contract extension, he had 77 receptions for 1,052 yards and six touchdowns in 12 games.

But there were issues. He never truly connected with first-year Giants coach Pat Shurmur and lacked chemistry with quarterback Eli Manning, whose skills came into question.

Now he’s hooked up with Mayfield, one of his offseason workout partners.

“I’m extremely excited about the opportunity to be part of this organization and the direction they are headed,” Beckham said. “I’ve already witnessed the energy fans bring in that city having been to some playoff games at The Q. Browns fans deserve a winning football team. This is a fresh start for me and it’s going to be great to join Baker and Jarvis on this team.”

Dorsey, whose decision to take Mayfield with the No. 1 overall pick last season altered Cleveland’s trajectory, plucked Beckham from one of the league’s most stable franchises without mortgaging the present or future. He somehow convinced Giants GM Dave Gettlemen to basically hand him the game’s highest-paid receiver and best playmakers in exchange for two picks and Peppers, a former first-round selection of Cleveland’s regime.

The price was minimal by mega-trade standards and came just two weeks after Dorsey said, “We’re not ready to go for it.”

But he changed his mind, perhaps because of a less-hostile landscape in the AFC North, where the Steelers have been rocked by the departures of Antonio Brown and Le’Veon Bell; Baltimore’s loss of defenders C.J. Mosley, Terrell Suggs and Eric Weddle; and Cincinnati embarking on what could be a long rebuilding project.

Mostly, though, Dorsey trusts Mayfield and believes he can be the one to “awaken this sleeping giant.”

The Browns are done being down.

Murray doesn’t run, but shines as a passer at…