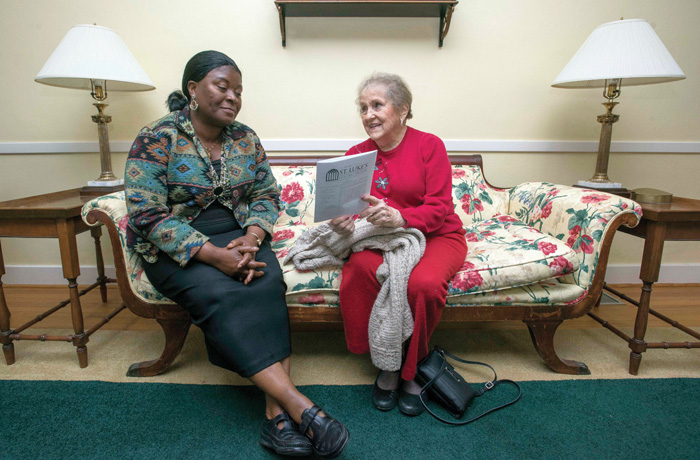 Editor’s note: This article is the second in a series featuring new Americans. The Rowan Literacy Council assisted four local immigrants in attaining citizenship – a lengthy and critical process. The Post is featuring one of them each Thursday March.

“Our parents would wake up at 3 o’clock at night,” recalls Eunice Gladey, “and we walked two hours to come into the town where they teach English. ‘We want our children to be kwee,’ they said.”

Kwee, it turns out, is “literate or civilized.” Gladey is certainly kwee.

She’s a Liberian and recently earned her citizenship with the help of the Rowan Literacy Council.

Liberia is on the west coast of Africa, the continent’s first and oldest republic. It has seen political turmoil since the 1980s. An estimated 83 percent of Liberians live below the international poverty line of $1.90 a day.

Gladey, whose parents still live in her home village, grew up in a family — three sisters and five brothers — for which food wasn’t plentiful. But her parents gave food to those who needed it. And, when she and her siblings asked why they gave food away, the answer was, “We give away so someone will give to you when you grow up.”

“When you’re a kid, you don’t understand the meaning of that,” Gladey said. “My mother would say, ‘I am doing this for your tomorrow.’”

Gladey said her parents taught her how to live with people, be respectful and how to work.

When she immigrated to the U.S., she had a sponsor in Atlanta, but that was short-lived.

“The first person I lived with she said, ‘Welcome to America; bye.’ And she was gone,” Gladey said. “I had no way out. I had no one to keep me. Another lady (in Salisbury) said, ‘I’ve got a place. If she can come take care of my children, she can stay in my house.’”

So the sponsor in Atlanta put Gladey on a bus to Salisbury. She had no knowledge of where she was headed but got on the bus in faith and arrived here safely.

“God held me in his hand,” she said. “She housed me and fed me for two years. Through her, that’s how I found a job at Trinity Oaks, and God directed me to find Char. When I think on it, I have tears in my heart.”

Gladey beamed at Molrine during an interview, saying, “I am that kind of person who is very shy. But when I met her, I decided I needed to ask for her friendship. Since that time, it has been a wonderful time.”

Gladey notes that she came to the United States with nobody but that Molrine has “been an angel” and a “great blessing” in her life.

“I don’t know how to appreciate her. I have met wonderful people. I say, ‘God, thank you,’” Gladey said.

Molrine feels the same way about Gladey. When Gladey first came to Molrine’s house, she said, “God wants me in your life.”

“So I thought about it. I said, ‘If God wants me in your life, then he wants you to come to my church,’” Molrine recalled. “Turns out, she had been going to another church and had not really been accepted there.”

Gladey was confirmed at St. Luke’s Episcopal Church and now serves as an usher and member of the Altar Guild.

“When I reached to the church, I felt that I was home. It wasn’t just because I met her, but I was home,” she said.

Gladey recalled the tough times in Liberia, too.

“You see, our country is suffering,” Gladey said. “We are suffering. It is getting harder every day. … It is not easy there.”

Laurel Harry, program coordinator at the Literacy Council and one of her tutors, says Gladey has worked hard to earn her citizenship.

“It’s an expensive process for anybody,” Harry said. “Filing fees, lawyer fees, time spent off work to attend these appointments and every form you submit costs 500, 600, 900 dollars. You’ve got filing fees that go to USCIS and on top of that, additional legal fees in the thousands.”

“Another thing to consider, she is paying taxes,” Molrine adds.

But Gladey is no quitter. She walked from Ellis Street to Trinity Oaks five days a week for her work.

“I had to be there by seven in the morning. I did not care to know how long it took me. I just need to know how to get there,” Gladey said. “I take the main roads, no back streets, because I don’t want anyone to get me.”

Gladey says she likes to work and would like to go to school, too.

She has strong feelings for Harry. She’s is a “good, sweet woman” and a friend, Gladey said.

“I told her the other day if there’s something I want to learn, she makes it stick in me,” she said.

She has a gift, Gladey says.

Harry recalled the day Gladey passed the test, saying Gladey was laughing, yelling and about to cry all at once. Harry was close to crying, too.

“It was like an out-of-body experience,” Gladey said. “I felt like it wasn’t me writing the answers, it wasn’t me answering. I thought the test would take two hours. It took me 30 minutes.”

Why did Gladey choose America?

“For so many reasons,” she said. “When you are a citizen of a country, you do not know the value of that country. From what I observed, America would be the best for me. When it comes to education, if you are willing to learn, you can learn anything. … It’s so hard to leave. But America is different. When you come from another country, you see it is different. The best thing I like about America, is they help you help yourself.”

Now that she’s a citizen, Gladey is already thinking about what’s next.

God has her future in his hands, Gladey says.

“Today I did not even know I could come this far,” she said. “Everything is trusting in him. I ask him to put me in a way that I can make a future for his glory.”

Rowan Literacy Council assists people in the area with learning to read, learning English as a second language, and attaining American citizenship. The council is a United Way agency. To volunteer, call 704-216-8266.