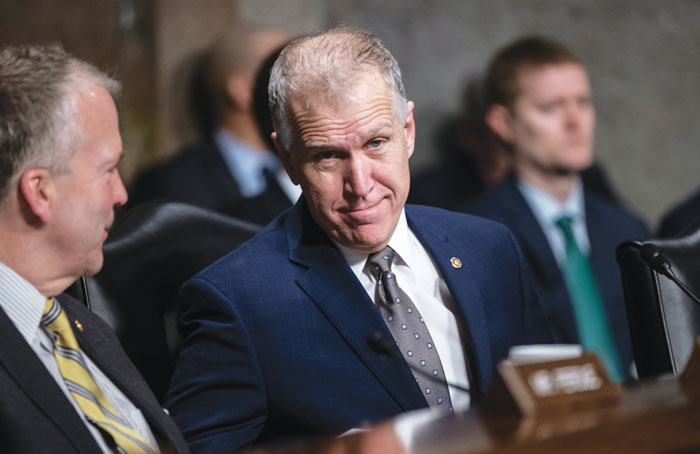 Tillis announced his change of heart on the Senate floor, minutes before the Senate voted to disapprove Trump’s declaration.

“A lot has changed over the last three weeks,” when he laid out his objections to the president’s action in a column in The Washington Post, Tillis said.

After discussing the issue with Vice President Mike Pence and other senior administration officials, as well as Republican Sen. Mike Lee of Utah, Tillis said he is optimistic lawmakers can change the way national emergencies are declared.

“The concerns I’ve raised were never about what President Trump is trying to accomplish but rather with setting a precedent that a future Democratic president would exploit to bypass Congress,” he said, adding that he is “incredibly encouraged by the historic commitment from the president to restore proper balance between the executive and legislative branches.”

In the meantime, Tillis said, “I think we have to recognize that we have a crisis at the border.”

More than 76,000 people crossed the southern border illegally last month alone, he said. “We have narcotics flooding our country, poisoning our children and adults of all ages, and a lot of it has to do with the porous border and the seemingly out-of-control crossings.”

Tillis, a Republican who is facing re-election in 2020, has been facing public pressure from Trump and local Republicans, who have indicated they’d be open to a primary challenger to him.

In the end, Tillis decided to back the president.

The decision placed him at odds with 12 Republicans who sided with Democrats to reject Trump’s emergency declaration. The vote set up a veto fight and dealt Trump a conspicuous rebuke as he tested how boldly he could ignore Congress in pursuit of his highest-profile goal.

Tillis was among a group of GOP senators who had wavered on the high-profile vote amid concerns that Trump’s die-hard loyalty from millions of conservative voters could lead them to punish defecting lawmakers in next year’s elections.

A White House official said Tillis had been in regular touch with Pence and other officials as he weighed his vote. The official said the consistent message from the White House was that a vote in favor of the resolution was a vote against border security — an action that would be hard to explain to his state.

A person familiar with Tillis’ thinking said he and other GOP senators needed a public signal from Trump that he would work to fix law on emergency declarations. Trump tweeted Thursday, “If at a later date, Congress wants to update the law, I will support those efforts, but today’s issue is BORDER SECURITY and Crime!!!”

Tillis’ initial strong statements of opposition to Trump’s use of executive power were not the first time the former IBM consultant and state House speaker had defied the president. Tillis partnered with Democrats earlier this year on legislation to protect special counsel Robert Mueller’s job investigating the president’s campaign and Russia’s interference in the 2016 election.

For Tillis, 58, decisions on how and when to support or oppose Trump are clearly shaded by his expected bid for a second Senate term next year — and the drive to hold off any strong challengers. In a floor speech and the Post column, Tillis made clear that he shares Trump’s concerns about border security.

But he firmly declared that Trump’s effort to go around Congress to pay for his wall overstepped the Constitution’s separation of powers. “As a U.S. senator, I cannot justify providing the executive with more ways to bypass Congress,” he wrote last month.

Tillis’ change of heart seemed aimed at appeasing the GOP base in North Carolina as well as independents.

“He needs both an enthusiastic party base as well as at least some unaffiliated voters to win,” said Eric Heberlig, a political science professor at the University of North Carolina at Charlotte. “To appeal to one is basically to shut out support for the other.”

While Tillis has been a reliable conservative vote during his first term, he’s also pressed for bipartisanship, hardly letting a few days go by this year without news releases highlighting bills he introduced with Democrats.

Republicans back home had questioned Tillis’ support for Trump when he co-sponsored the legislation to protect Mueller’s job. Tillis said in January he didn’t believe Trump would fire the special prosecutor but called that bipartisan bill “good government policy with enduring value across the current and future administrations.”

Diane Parnell, chairwoman of the Rockingham County Republican Party, said now is not the time for Tillis to reach across the aisle.

“We want him to support our president,” Parnell said.

State Democrats jumped on his flip-flop on Trump’s emergency declaration.

“Sen. Tillis made a big show about how he’d stand up for North Carolina but caved under pressure,” said Democratic Party spokesman Robert Howard. “Tillis again reminded the entire state who he is: a spineless politician who won’t keep his promises and looks out for himself instead of North Carolina.”