Murray doesn’t run, but shines as a passer at pro day for Oklahoma 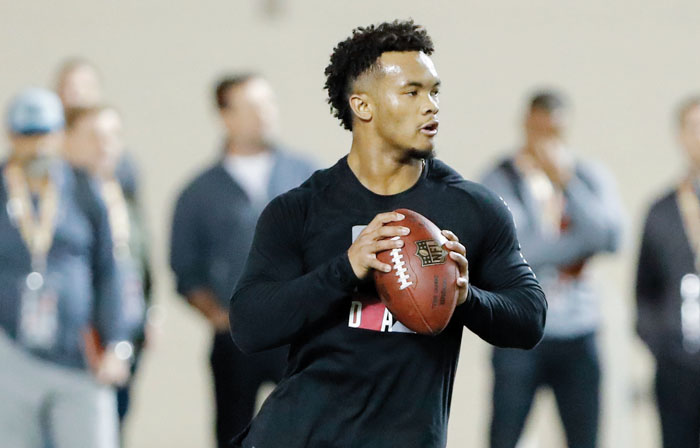 The people around him figure it’s common knowledge he has blazing speed, so the Heisman Trophy-winning quarterback chose not to run Wednesday in front of NFL scouts.

“For him, it was just a matter of, it didn’t make sense to run and do all those things,” Oklahoma coach Lincoln Riley said. “He’s athletically so far beyond anything in this game and anything in that league either at that position. I mean, honestly, there’s no point to it.”

Murray said he would have expected to run something in the 4.3-second range.

“I’m pretty confident in my abilities as far as running,” he said. “I think the film kind of speaks for itself. I’d love to get out there and run, but it’s just not as necessary. I just don’t think it’s necessary for me. That’s just the decision we came up with.”

He threw well enough to add to the buzz that he might be worthy of going No. 1 overall in next month’s draft. He made 66 throws and was impressive enough to get a meeting with the New York Giants afterward. The Giants have the sixth pick. Arizona currently holds the top pick.

“It was a very, very strong performance,” Riley said. “No question about it. You go travel to any Pro Day anywhere you want to, you’re not going to see another throwing performance like that. It was really strong.”

NFL Network’s Charley Casserly, a former executive with the Washington Redskins and Houston Texans, last month said Murray fared poorly during interviews at the NFL scouting combine. On Wednesday, Murray said he never heard the comments, but did hear from several teams that were impressed.

“I felt amazing leaving the combine,” he said. “I thought every meeting I had went well. Didn’t have any — at least to my face, nobody was negative. I had fun with it. It was a great experience.”

He took care of concerns about his height at the combine, where he measured at just over 5-foot-10. He weighed in at 205 pounds on Wednesday.

Size appears to be less of a concern than in the past, thanks to success of shorter players such as Russell Wilson and Drew Brees.

“People now are not scared to draft somebody that 10 years ago would have been too short,” Riley said. “You’re seeing (shorter) guys have success, and I think they’re starting to pay more attention to skill sets than actually how tall a guy is. How many 6-5 quarterbacks have been drafted throughout the years that can’t play dead?”

ADDITION OF ANTONIO BROWN ‘CHANGED EVERYTHING’ FOR RAIDERS

ALAMEDA, Calif. (AP) — Rookie general manager Mike Mayock and coach Jon Gruden had meticulously put together a plan to rebuild the Oakland Raiders with three first-round draft picks and a couple of smart free agent signings when they suddenly got sent in a different direction last week.

The Pittsburgh Steelers were willing to trade the NFL’s most prolific wide receiver for two mid-round draft picks, assuming the Raiders could come to terms on a new contract for Antonio Brown.

“When we discovered we might have a chance for his services, it changed everything,” Mayock said Wednesday after the Raiders officially added Brown as their first big move of the new league year.

The Raiders dealt third- and fifth-round picks in the upcoming draft to the Steelers and gave Brown a new three-year contract worth $50.125 million, a relatively small price to pay for a player who has averaged more than 100 catches and 1,500 yards receiving per season over the last six years.

The trade ended a very messy and very public divorce between Brown and the team that helped mold him from a sixth-round pick into arguably the greatest wide receiver of his generation.

“Pittsburgh will always be my family,” Brown said. “Those guys gave me a chance when I was a 21-year-old kid. People listen to the things that are being said and written. At the end of the day, it’s all about how you make people feel. I think I made people feel really great and really inspired the way they watched me go to work, the way they watched me play. … I know Steeler Nation is having a bad day today, but it’s always love.”

Mayock and Gruden have admired Brown from afar during their time as broadcasters, with both calling him the hardest-working practice player they have ever seen.

“He’s done everything in his power to be the best he can possibly be on and off the field,” Gruden said. “His body of work is not only impressive, but fun to watch. He’s electrifying after the catch, he’s a great competitor, he wins the 50-50 ball, he’s outstanding in short areas. You have a great imagination as a football coach when you coach a man like this. He can play split end, he can play flanker, he can play in the slot. He can return punts and sell popcorn at halftime. We’re excited about this guy.”

Brown is one of several additions the Raiders have made to start the new league year. They agreed to a four-year, $66 million deal with tackle Trent Brown to bolster the line and a four-year, $42 million contract with safety Lamarcus Joyner during the negotiating period.

They also added another receiver Wednesday, agreeing to a four-year contract with former Chargers deep threat Tyrell Williams, a person familiar with the deal said on condition of anonymity because the contract hasn’t been signed yet.

Williams had 41 catches for 643 yards and five touchdowns last season. He has averaged 16.3 yards per catch for his career, the fifth-highest mark among players with at least 100 catches since he entered as an undrafted free agent out of Western Oregon in 2015.

The additions of Antonio Brown and Williams on the outside and a top pass blocker in Trent Brown should help quarterback Derek Carr regain the form he had when he was one of the better quarterbacks in the league in 2016 before regressing the past two years.

Carr and Brown have already started working out together at a nearby park and are excited to see what they can do on the field.

“It’s refreshing,” said Brown, who clashed with Ben Roethlisberger during the end of his time in Pittsburgh. “I think he’s hungry for success, hungry to turn the organization around, hungry to get on the winning side of things. I’m just hungry for the same things.”