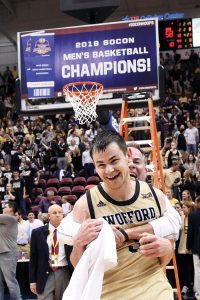 Wofford guard Fletcher Magee (3) receives a hug after his team defeated UNC-Greensboro 70-58 for the Southern Conference tournament championship, Monday, March 11, 2019, in Asheville, N.C. Magree is the Most Valuable Player of the game. (AP Photo/Kathy Kmonicek)

ATLANTA (AP) — Ron Hunter has no illusions about what his Georgia State team must do to reach the NCAAs.

Win their conference tournament — or settle for the NIT.

“I told my players that very thing the other day,” said Hunter, whose Panthers earned a bye to the semifinal round of the Sun Belt Tournament in New Orleans. “If a mid-major coach tells his kids anything else, he’s doing them a disservice. Sure, it’s not fair. But a lot of things in life aren’t fair.”

Never mind that the Panthers defeated two Southeastern Conference teams — Alabama and Georgia — this season. Never mind that three of their four non-conference losses came on the road to teams that won or shared their conference titles (the other was at Creighton, which is also in the mix for an NCAA bid). Never mind that they won the Sun Belt regular-season title with a gritty road victory on the final day.

“If everything was fair, we should be in,” Hunter said. “But the NCAA is set up for the Power Five schools.”

Even those with losing records in conference play — which should be a disqualifier.

Georgia State (22-9) is hardly alone in facing a stacked deck as the selection committee sorts out its 68-team field, but this year seems like the perfect opportunity to start evening things out just a bit for the little guys:

— Belmont lost to Murray State 77-65 in final of the Ohio Valley Conference Tournament without freshman star Nick Muszynski, who couldn’t go because of an ankle injury sustained in the semifinals. The Bruins (26-5) still deserve to be in the NCAAs. They won at UCLA (hastening the departure of Steve Alford), had a respectable loss at Big Ten co-champion and No. 13 Purdue, went 16-2 in their league and are No. 46 in the NET, which is replacing the RPI in the selection committee’s evaluation process

— Lipscomb fell to Liberty 74-68 in the final of the Atlantic Sun Tournament, but the Bisons (25-7) have our NCAA vote after winning 25 games, including an impressive victory at bubble contender TCU early in the season. Two of their losses are to Belmont — by a total of six points — and they lost by four at Louisville. The only double-digit setback on their resume is a 17-point defeat at ACC school Clemson, another team on the bubble.

— UNC Greensboro should join Wofford to give the Southern Conference a pair of NCAA representatives. The Spartans (28-6) fell to Wofford in the championship game of the league tournament (their third loss this season to the Terriers). Greensboro’s other defeats were a six-point setback at No. 9 LSU (a possible No. 1 seed), a 17-point loss at No. 4 Kentucky (also in the mix for a No. 1 seed) and a conference loss at Furman (another SoCon school that merits at least a mention when the selection committee deliberates).

— Buffalo has done enough to get in, no matter what happens in the Mid-American Tournament that begins Thursday. The Bulls (28-3) won at both West Virginia and Syracuse, put up an entertaining fight in a 103-85 loss at No. 23 Marquette, and romped through their conference schedule with only a four-point loss at Bowling Green and a two-point setback at Northern Illinois. While we’re at it, fellow MAC school Toledo (25-6) also can make a rather compelling NCAA case, regardless of what happens this weekend.

— Davidson was runner-up to VCU in the Atlantic 10 and boasts an NCAA-worthy resume. Steph Curry’s alma mater goes into the conference tournament with a 23-8 mark after losing neutral-site games to Purdue and 23-win Temple, falling on the road to ACC schools North Carolina (ranked No. 3 by The Associated Press) and Wake Forest, and dropping three conference games by a total of five points.

— No. 14 Nevada is assured of a spot from the Mountain West no matter what it does in the conference tournament, but Utah State (24-6) is worthy of the same consideration. The Aggies (25-6) tied the Wolf Pack for the regular-season title, are No. 30 in the NET, and their only losses outside the league were all on the road, at Arizona State, Brigham Young and No. 11 Houston — three teams that are a combined 69-24 this season.

Of course, Hunter knows there’s little chance that all those non-Power Five teams will get in as at-large teams.

The NCAA Tournament is a show for the big boys.

“It’s not as if they don’t want the mid-majors,” Hunter said. “They just don’t want us taking those at-large bids.”

Given the mammoth amounts of money that are on the table, it’s unrealistic to expect the Power Five to give up its death grip on the NCAA field.

But let’s go back to the suggestion of having the NCAA selection committee only consider teams that have a winning record in its conference for an at-large bid, which would be one way the major schools could at least show a bit of benevolence.

The less-prominent conferences could also take a major step to at least ensure their best teams are represented in the NCAAs by scuttling their league tournaments. Most of them money losers, anyway, and do nothing more than provide an opportunity for a worthy regular-season champion to get knocked out the Big Dance by one bad performance.

If the Sun Belt season had ended last Saturday, Georgia State would be gearing up for its third NCAA appearance in five years.

Instead, the Panthers know they have to win two more games this weekend.

“We just played Georgia Southern in a sold-out arena in what amounted to a championship game,” Hunter said, referring to a 90-85 victory in the regular-season finale. “That should have decided who goes to the NCAA Tournament, instead of playing Sunday (in the Sun Belt Tournament final) before maybe a couple of hundred people.”

Paul Newberry is a sports columnist for The Associated Press. Write to him at pnewberry@ap.org or at www.twitter.com/pnewberry1963 His work can be found at https://apnews.com/search/paul%20newberry

CHARLOTTE (AP) — Buddy Boeheim had a career-high 20 points, and Syracuse defeated Pittsburgh 73-59 on Wednesday night in the... read more