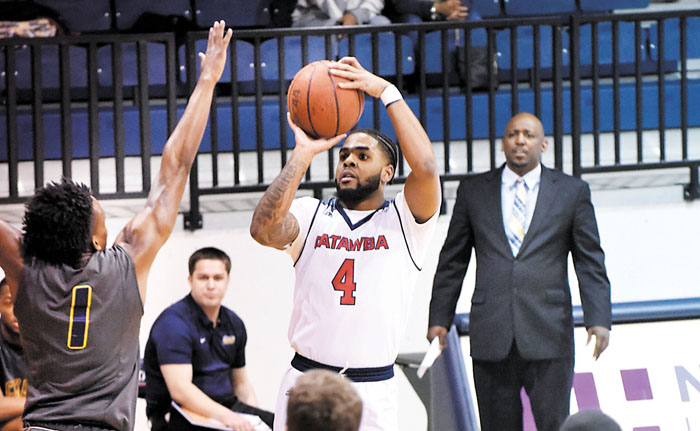 SALISBURY —  The 2018-19 basketball season in NCAA Division II was just coming out of the starting blocks when a remarkable contest was staged on Nov. 10 in front of about 1,000 people at Catawba’s Goodman Gym.

UNC Pembroke won it in overtime. UNCP head coach Ben Miller couldn’t believe his team prevailed because the Catawba Indians wrecked the Braves on the backboards, 49-34, and it was 22-7 when it came to offensive rebounds.

Catawba was equally astounded that it didn’t win that game.

What it came to down to was UNCP’s senior star James Murray-Boyles, a 6-foot-7 forward from Columbia, S.C., making remarkable plays at the end, while Catawba’s senior star Jameel Taylor, a 6-4 guard from Anderson, S.C., was enduring one of the worst games of a remarkable career. Taylor shot 8-for-24 and made seven turnovers. Making a long story short, he tried to put it all on his shoulders.

Coach Miller, in the aftermath of that game, offered the opinion that Catawba would be a regional team and that it wouldn’t lose to many people. Folks probably laughed when they read that quote because Catawba hasn’t been good for quite a while, but Miller knew what he was talking about. He was a prophet.

Jump ahead four months, and Catawba (24-7) is gearing up for a Saturday night rematch (8 p.m.) with UNC Pembroke (21-9), and now much larger stakes are on the table. This time it’s a first-round matchup in the Southeast Regional. Catawba is the No. 4 seed, while UNC Pembroke is the No. 5 seed. The winner probably will get a shot at top-seeded regional tournament host Queens. Queens is playing No. 8 seed Emmanuel at 5:30 p.m. on Saturday.

“The only two teams we’ve played this year that we haven’t beaten are UNC Pembroke and Queens, so we’re obviously very excited about the way the bracket worked out,” Catawba head coach Rob Perron said. “The committee did a great job not to match up conference opponents in the first round. We thought we might be playing Lenoir-Rhyne again for the third time in a very short period.”

While Catawba has an almost entirely new team  (Taylor and Malik Constantine are the only guys in the rotation who also played last season), it is not an inexperienced team. This is a transfer-laden group, very mature, physically strong, grown men. They are unlikely to experience any regional jitters.

Catawba has evolved quite a bit under Perron’s leadership since November. Some of Taylor’s new teammates who were minor factors in that first meeting with UNC Pembroke — second team All-South Atlantic Conference bomber Marcell Haskett, still underrated Jordan McElveen, SAC tournament MVP Devin Cooper — have developed into powerful forces. Taylor has been around a long time and is like an assistant coach. He’s figured out this team has so much talent that he doesn’t have to score 20 for the Indians to win. Some nights, he’s a distributor. Some nights, he’s a ball-handler so Cooper can score. Some nights, he still takes it to the rim hard. Every night, he defends.

“He’s been a great leader,” Perron said. “There’s a lot of toughness there, and he’s developed a strong trust in his teammates.”

Catawba has won five in a row, with three coming on the hard road to the program’s first SAC tourney title in a decade.

Relatively speaking, UNC Pembroke is not a hot team. The Braves didn’t win the Peach Belt Conference regular season or the league tournament, but the program has been so solid for so long that the Braves nailed down an at-large bid. They are in the regional for the third straight time and the sixth time since 2010-11.

“They’re really good and they’ve gotten better since the first time we played them,” Perron said. “They’re tall and long, very big and athletic. They pride themselves on defense and they contest every shot. We’ll have to shoot the ball better than we did in the regional to beat UNC Pembroke, and we know that. The other keys are always keys — rebounding and turnovers. We need to win those two battles.”

Perron said this week’s practices have been spirited. The team is upbeat. Constantine, Daquan Lilly and Ben Zemonek, important players for the Indians, have battled through ailments and injuries, but all should be ready to do their part.

“There was a lot of hype about winning the SAC Tournament and then there was the excitement of seeing where we were in the bracket,” Perron said. “But I think we’ve done a good job the past few days of getting back to work and focusing on the task at hand.”

The winner will play in a semifinal on Sunday at 7:30 p.m.