Saint Mary’s knocks off No. 1 Gonzaga for WCC title 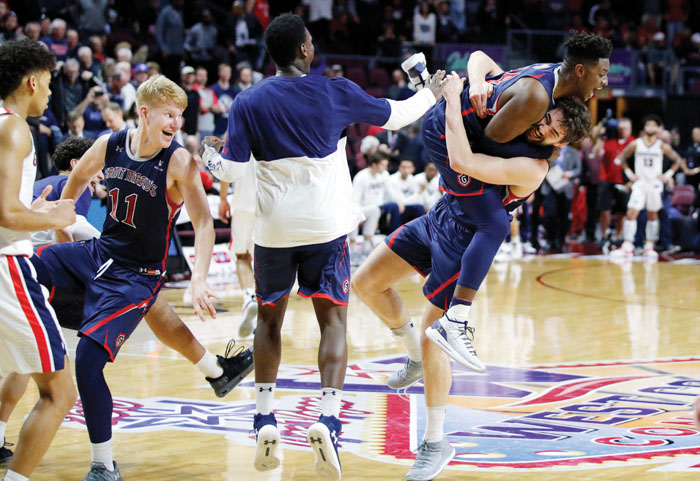 By JOHN MARSHALL AP Basketball Writer
LAS VEGAS (AP) — Saint Mary’s heard for weeks about the NCAA Tournament bubble. First four in, first four out, fortunate to be in the discussion to be included in the field of 68.
Tired of all the chatter, the Gaels put an emphatic end to it, popping the bubble by taking down a team no one outside their program thought they could beat.
Saint Mary’s ended the nation’s longest winning streak and Gonzaga’s six-year reign as West Coast Conference Tournament champions, grinding out a 60-47 victory in the title game on Tuesday night.
“We were told to pull off a miracle by people who don’t know us,” said Saint Mary’s guard Jordan Hunter, who had 12 points and 15 rebounds. “We didn’t need a miracle. We knew we could beat them.”
Saint Mary’s (22-11) all but shut down the nation’s highest-scoring team by slowing the game and forcing Gonzaga to grind out possessions instead of playing fast and free.
The Gaels held Gonzaga’s leading scorer Rui Hachimura in check and limited the Zags (30-3) to 2-of-17 shooting from 3-point range to end the nation’s longest winning streak at 21 games.
Gonzaga’s 18-game WCC tournament winning streak, dating to the 2012 title game, also came to an end, and so too could its bid for a No. 1 seed in the NCAA Tournament.
Instead of waiting for Selection Sunday, Saint Mary’s left no doubt, getting back to the NCAA Tournament after a one-year absence with its first WCC title in nine years.
Jordan Ford had 17 points and Tanner Krebs scored 13 for the Gaels.
“The way we did it, from where we were at the beginning of the year until now, I get a lot of satisfaction out of that,” Saint Mary’s coach Randy Bennett said.
Gonzaga steamrolled its way to the regular-season title and through the WCC semifinals by getting out in transition, knocking down open shots.
The Zags did neither against Saint Mary’s, held to a season-low in points and 37-percent shooting. Gonzaga had six assists after finishing with 26 in the WCC semifinals against Pepperdine.
Brandon Clarke led Gonzaga with 16 points and Hachimura was held to nine, nearly 12 under his average.
“It was our worst offensive game of the year and give them credit for that,” Gonzaga coach Mark Few said.
Gonzaga dominated the WCC during the regular season, finishing 16-0 while winning by a conference-record 27 points per game.
Two of those wins came against Saint Mary’s: 66-55 in Moraga and 94-46 in Spokane.
The Bulldogs cruised into their 20th straight title game under Few — and 22nd overall — by crushing Pepperdine 100-74 in Monday’s semifinals.
Saint Mary’s controlled the pace in round three against Gonzaga, bogging down the Zags’ offense and forcing them into difficult shots. Gonzaga struggled to get anything to fall, open or not, scoring a season-low 24 points by halftime and missing six of its seven 3-point attempts.
“Gonzaga likes to get out and run, they feed off energy,” Ford said. “It was kind of like a home game for them and we had to slow the tempo.”
The Zags also had a hard time containing Krebs. The junior, who averages 8.9 points per game, had 13 by halftime to push the Gaels to a 27-24 lead. Saint Mary’s did it with second-leading scorer Malik Fitts limited to less than a minute because of foul trouble.
Saint Mary’s continued to bog down Gonzaga and Fitts scored eight quick points to open the second half. The Gaels extended the lead to 48-41 with 7½ minutes left and answered every time Gonzaga tried to make a run.
“They were mucking it up a little bit, getting into lanes and we just didn’t make shots,” said Gonzaga guard Josh Perkins, who had 10 points, four assists and five turnovers.
BIG PICTURE
Saint Mary’s played arguably its best game of the season at the best possible time. Now it’s on to the NCAA Tournament.
Gonzaga was never able to speed the Gaels up and rev up their high-scoring offense, showing a weakness that could be exploited.
STOPPING RUI
Few teams have been able to slow Hachimura this season. The versatile 6-foot-8 Japanese forward entered the WCC title game averaging 20.1 points and is a top All-America contender.
Saint Mary’s never allowed Hachimura to get into a flow, banging him around and bringing help defense anytime he made a move. Hachimura attempted just six shots and made three while going 3 for 6 on free throws.
UP NEXT
Both teams await their NCAA seedings.
___
More AP college basketball: https://apnews.com/Collegebasketball and https://twitter.com/AP_Top25