NFL at 100: Free agency has been key for the league 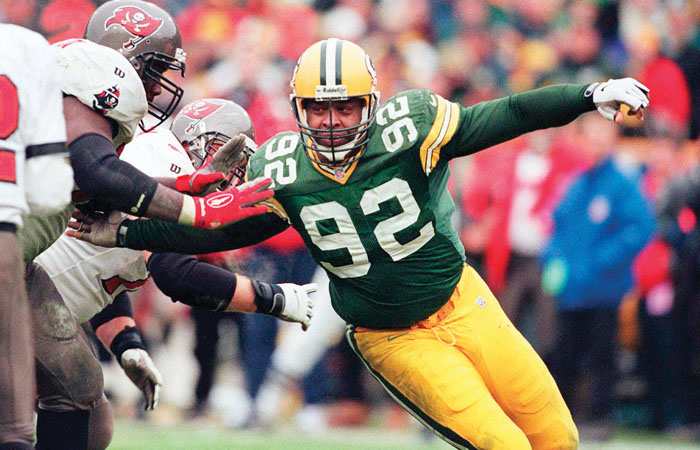 FILE - In this Jan. 4, 1998, file photo, Green Bay Packers Reggie White moves in on the Tampa Bay defense in the NFC Divisional Playoff game in Green Bay, Wis. The NFL wouldn't be the gigantic force it is in society and sports today without free agency empowering most players with freedom and fortune and endowing most long-suffering franchises and their fans with hope. The first offseason featuring modern free agency was in 1993, and it produced the most significant free agent signing in NFL history: Reggie White (AP Photo/Charles Krupa, File)

Le’Veon Bell, Nick Foles, C.J. Mosley and Landon Collins are among this year’s headliners cashing in during the 27th year of unfettered free agency, a system that emerged after a Minneapolis federal court ruled in 1992 that the Plan B free agency system of protecting 37 players on a team violated antitrust laws.

A lawyer for the league, Frank Rothman, warned in closing arguments that a verdict for the players could mean “the destruction of the National Football League that we know today.”

Yet, what rose in its place has been a godsend to the NFL, which is celebrating its 100th season this year. The NFL wouldn’t be the gigantic force it is in society and sports today without free agency empowering players with freedom and endowing long-suffering franchises and their fans with hope.

“I think free agency’s been great for the game for a lot of reasons,” said Joe Horrigan, executive director of the Pro Football Hall of Fame. “Look at us, we have a whole season now for the fan. It’s keeping the NFL front of mind 24/7, seven days a week, 365 days a year.”

Without free agency, the Green Bay Packers wouldn’t have returned to glory in the 1990s; the second chapter of Peyton Manning’s magnificent career might have gone unwritten; the New Orleans Saints wouldn’t have been able to parade the Lombardi Trophy down Bourbon Street; and Deion Sanders might not have earned two nicknames and two Super Bowl rings, one in San Francisco and another in Dallas.

Federal judge David Doty threatened to implement his own plan if team owners and the players’ union couldn’t agree on a free agency system following the league’s loss in court in 1992.

What finally won over the hardliner owners was the inclusion of a franchise tag and the coupling of a salary cap to control costs. The first salary cap was $34.6 million in 1994. Now, it’s $188.2 million.

The most significant free agent signing in NFL history occurred when the new system went into effect in the 1993 offseason: Reggie White chose Green Bay in a shocker that shifted the balance of power in the NFL and foretold free agency’s boom and boon.

“What was beautiful about that was everybody was fearful of free agency, fearful that all the best teams would stockpile all the greatest players and they’d all go to one place,” Horrigan said. “Well, the salary cap that came with free agency prevented that, No. 1. But then Reggie to Green Bay kind of suggested that the system was good for all.”

White teamed with Brett Favre to lead the Packers’ resurgence that ended a 30-year title drought.

Manning’s arrival in Denver two decades later also transformed a franchise that was far removed from its glory days.

After missing the 2011 season with a neck injury, Manning was cut loose by the Colts, who were turning to Andrew Luck. The Broncos won the Manning sweepstakes, which made it easier for general manager John Elway to lure other free agents such as DeMarcus Ware, Emmanuel Sanders, Aqib Talib and T.J. Ward, the emotional backbone of the team that won Super Bowl 50 in Manning’s farewell.

Somebody asked Elway at the introductory news conference what he would have done had Manning turned him down.

Sort of like the NFL had to do when the players decertified their union three decades ago and took the league to court in the face of long-standing fierce opposition to free agency.

“The pushback was huge, going back to 1969 and ‘70 with owners and labor-player management,” former commissioner Paul Tagliabue said.

The issue led to the 1987 players strike and owners’ infamous use of replacement players.

“Dan Rooney (the late chairman of the Pittsburgh Steelers) talked about some form of free agency then, but the majority of the owners’ committee would have no part of free agency,” Tagliabue said. “Then we came up with Plan B.”

Owners unilaterally imposed Plan B free agency in 1989 with the absence of a labor agreement, giving teams the right to protect 37 players on their 47-man rosters from becoming free agents.

While some players switched teams, all the really good players were still stuck.

The NFL’s current system isn’t flawless. The franchise tag irks the game’s superstars, and a recent AP study found that teams often turn to younger, cheaper players rather than put savings from the rookie salary pools into signing proven veterans.

“When the CBA came into effect in 1993, there was more of a middle class within the roster, and it was difficult for any young player to play, or much less make the active roster,” Yee said. “On the vast majority of rosters now, there is no middle class, and this certainly affects the product quality on the field. If a highly paid star is sidelined, often an inexperienced younger player has to step in.”

Both sides will try to tweak free agency again in the next round of labor negotiations.

“Ultimately, fan response carries the day,” Yee said. “If the fans don’t like the product and reject it, that will affect owners and the union, and they’ll have to work together to come up with a fix. Every ‘fix’ is a balance of competing interests, and there will be merit to a number of potential innovations.”