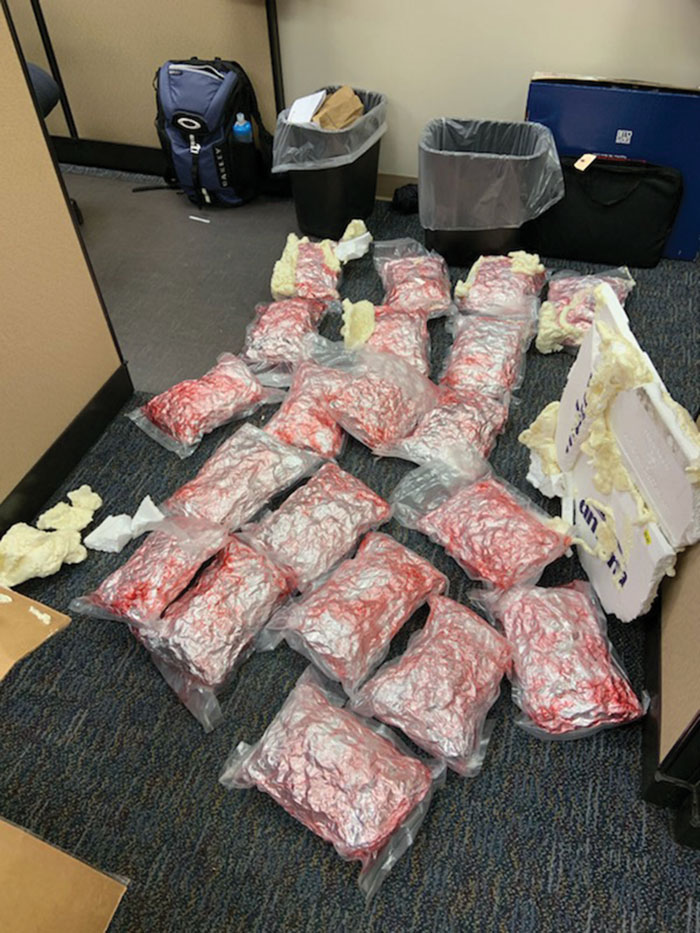 Submitted photo Marijuana found in a box delivered from California to Salisbury.

A Mexican national who has been in the United States illegally for 25 years was arrested by federal, state and local authorities for using FedEx to transport marijuana from California to North Carolina.

On Tuesday, the Concord Police Department was alerted about a FedEx package addressed to 1174 Tammy’s Park Road in Salisbury.

A police dog trained in narcotics detection alerted officers to the smell of narcotics from the package.

A search turned up 20 1-pound vacuum-sealed bags of marijuana, along with packing material.

The package was taken inside the mobile home by Yoshio Avila-Munoz, 37, who then left the residence in a vehicle. He was stopped at a convenience store in Faith.

Avilo-Munoz was taken back to the residence. Officers with the Rowan County Sheriff’s Office recovered the package and searched the mobile home.

Investigators found evidence of prior package deliveries from California, one handgun, one shotgun, two rifles, methamphetamine, and an additional amount of marijuana. The value of the drugs seized was about $60,000, authorities said.

Investigators determined that an immigration detainer was filed against Avila-Munoz in 2004 in Cabarrus County and that he had evaded arrest.

Avila-Munoz was charged with trafficking in marijuana, possession of methamphetamine, and maintaining a dwelling for keeping and selling controlled substances. Bond was set at $1 million.

An immigration detainer was issued for Avila-Munoz.

Because Avila-Munoz is in the United States illegally, he is prohibited from possessing firearms and faces potential federal charges.