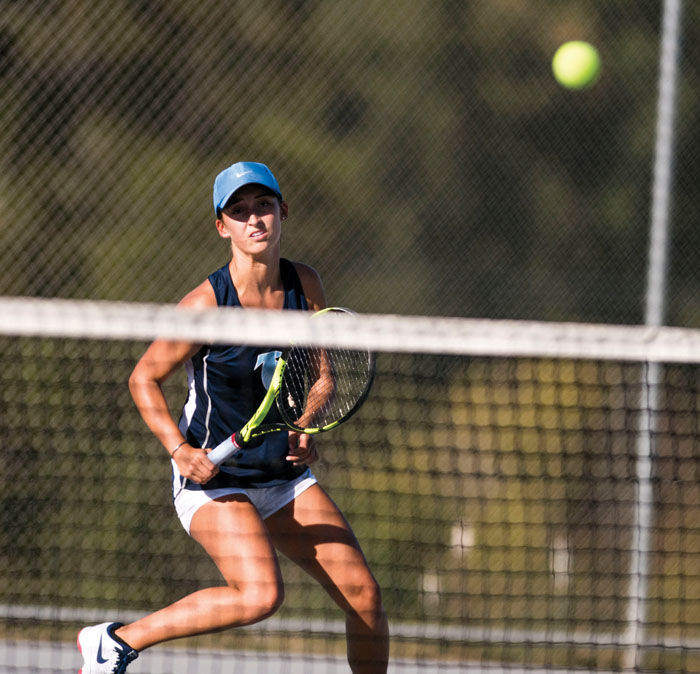 MOUNT ULLA – It wasn’t hard to figure out that West Rowan senior Payton Holt means a lot to a lot of folks.

The media room at West swarmed with people as Holt made things official with Emory & Henry College’s tennis program recently.

There are 14 girls on the tennis team, so a lot of those in attendance were family, friends, classmate, coaches, neighbors or people who go to church with the Holts.

It also wasn’t hard to figure out that Holt has accomplished a tremendous amount as a high school player. There were stacks of plaques at her table for conference player of the year, conference tournament champion and county tournament champion. You don’t get a plaque for being county tennis player of the year — just the recognition — but there would have been three of those, as well.

Holt was the solo winner of the award as a senior after sharing the award with Salisbury’s Maria Capito in the falls of 2016 and 2017.

“She was the never the tallest or the biggest or the strongest,” West coach John Brown said. “But Payton is the best I’ve ever coached. I’m sure she’s one of the best ever from the schools out in the county. They’ve had a lot of great players at Salisbury, but you don’t get players like Payton very often at a school like West Rowan.”

Holt was playing as the No. 1 seed for West as a freshman and never lost to a county opponent.

Holt had three doubles teammates during her career (Mackenzie Koontz, Abby Johnson and Lacy Waggoner) and was 42-6 in regular-season matches.

Holt battled through rigorous regional competition — the Midwest Regional is the hardest of the four —  to qualify for the individual state tournament three times.

“In this year’s regional, she had to beat tough girls who could hit it even harder than her,” Brown said. “But she was up to the challenge. She never feared anybody.”

Holt is talented and tenacious, but she’s not tall (5-foot-3). She’s had to put in years of extra work to be a champion.

“She’d practice with us, then go to Lake Norman for lessons, and then play in USTA tournaments on Saturday,” Brown said. “Her work ethic was unmatched.”

Despite her credentials, the recruiting process proved long and, at times, stressful. She had a number of offers from Division II and Division III schools, but it was a difficult decision.

The Holts logged a lot of miles and visited campuses in five different states — both Carolinas, Tennessee, Virginia and West Virginia.

For months, she expected to head to Tusculum (Greeneville, Tenn.) or Southern Wesleyan (Central, S.C.) before finally choosing Emory & Henry.

“I changed my academic focus from looking at biology and pre-med schools to finding the right fit for me as an exercise science major,” Holt explained. “That would lead to physical therapy school, and Emory & Henry has a great physical therapy graduate program.”

Emory & Henry is located in Emory in the highlands of southwestern Virginia. A prestigious academic school, it’s been around since 1836.

The Emory comes from John Emory, a Methodist bishop, while the Henry is a tribute to Patrick Henry, the patriot who shouted “Give me liberty, or give me death!” at the Second Virginia Convention in 1775. He was a hero of the American Revolution.

Holt hit it off with her future E&H coach and teammates on her visit, which was a major part of her decision.

“I want to know who my teammates are and what they’re like,” Holt said. “I don’t want them to be just the girls I play matches with. It was very much a family atmosphere at Emory & Henry.”

As far as what happens on the tennis court, heading to a Division III school that competes in the Old Dominion Athletic Conference means that Holt should be on the court immediately for the Wasps.

“A realistic goal for me is to get to compete on the first court, instead of waiting for a chance to be No. 4 or No. 5 at some other places,” Holt said.

While Holt is moving on, her legacy will remain at West for a while. The Falcons won their first conference championship this season. She wasn’t just an automatic winner at No. 1 singles and doubles, she was an unofficial assistant coach, helping and inspiring her teammates.

“I coach two sports (wrestling and tennis) that are individual based, but they are played within the framework of a team,” Brown said. “I can tell you that Payton was a great teammate and a great leader for a young team.”

As a senior, Holt was undefeated in the regular season and finished 25-4.  West finished 15-2 overall and 9-1 in the NPC.

As a junior, Holt was West’s only all-county player. This season five Falcons were in the all-county photo.

The championship banner and the strides made by her teammates meant a lot to her.

“Payton is so good that you might think she would just care about herself, but it was never like that,” said junior Skylar Jahnke who won frequently at No. 4 singles and No. 3 doubles for the Falcons. “Payton always put our team first. She gave us all confidence, and even without her, we’ll take that confidence to the court next season.”