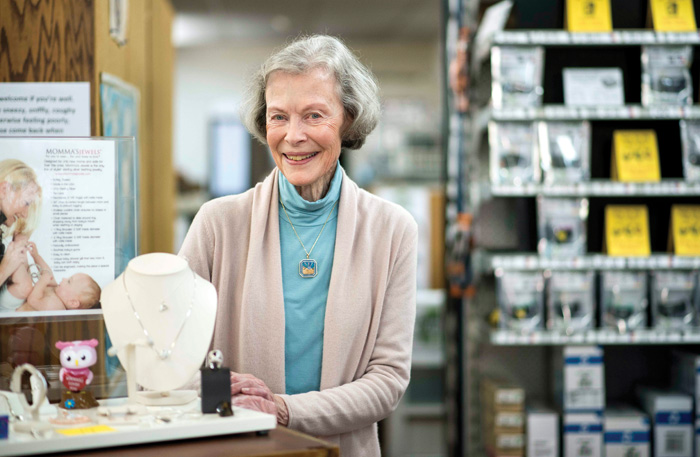 SALISBURY — Carol and Jim Rabon opened Windsor Gallery in 1984, and they’ve thrived because of ingenuity and perseverance.

Carol’s a tiny woman with big blue eyes. She’s quiet, self-effacing and reflective. She doesn’t even wear much jewelry. Her hands are unadorned as they repair and polish jewelry for customers.

“My husband, Jim, was selling natural nugget jewelry for a fellow here in Salisbury. He bought the company from the fellow and ran that for a couple of years in the old Rowan Dairy building,” Carol says. “Then we moved to the location between DJ’s and Romano’s; there’s a physical therapy place there now. That was our first store. He opened it as a showroom to sell retail but also to sell jewelry to other stores.

“That was around the first recession we had, in the late ’80s. We moved to this location (at the Ketner Center) in ’90. It was the Music Mart. They left a lot of stuff here; we just moved in.”

It takes quite an investment to build an inventory of jewelry, she says.

“And whatever you buy, you know you’ll sell 20 percent of it.”

Carol was a kindergarten, preschool and special education teacher with two master’s degrees when the Rabons ventured into owning the store.

“I educated myself just by doing it. We have a family history of jewelry. From that, I have that interest in me. My great-great-great-great-grandfather was a silversmith, Henry Horah, for whom Horah Street is named. Some of his pieces are in Rowan Museum.”

By the way, she pronounces Horah “HORR-ah” and is certain that’s the correct pronunciation, not “HOO-rah” as many locals say. It is, after all, her family.

“There were several generations of jewelers on my mother’s side of the family. When we were investigating the Cook family, her father’s, there is a store, Koch Jeweler’s in Badenburg, Germany. It was started in the early 1700s, and it’s still there today.

“We’ve always been interested in gemology. We read, of course, and we’ve worked with a lot of jewelry and with a lot of people who have different issues and preferences in what they like. After thousands of pieces of jewelry, you educate yourself that way.”

Windsor Gallery has its own niche in the Piedmont.

“We don’t buy ahead of trends. Trends used to come in and stay for a while. Today it’s so quick, you don’t have time to purchase it and have it around before it’s changed. Today when you have a branded item, people come in and see it, like it, go home and look it up and buy it online. That’s a lot to keep up with for us.

“We tend not to recycle or scrap out-of-date pieces. That’s what the trade publications recommend. Instead, we store it away. We’ll pull something out and say, ‘Well, that has come back.’ Or we have a vintage case.”

Kirsten Reynolds, the Rabons’ daughter, uses some of it in her pieces.

“We do try to keep up with trends, but when you do that, you wind up with merchandise that looks like everyone else’s. We prefer to be more unique. We really like handcrafted pieces.”

Reynolds makes custom jewelry using, among other tools, computer-aided-design (CAD). Carol is clearly proud of her.

“Using her program, she can design a piece and then show the customer what it would look like on a hand or, if it’s a necklace, on the neck. They can decide on it before it’s even made. She’s really interested in computer design and has gotten really good at it.”

They named the store Windsor Gallery because their son was fascinated with royalty.

“A vendor said, ‘Put ‘gallery’ in it to indicate you do things other than just jewelry,’ so we did. I like to say we’re Salisbury’s eclectic jeweler.”

Their son, Jonathan, manages horse shows from Florida to New York. He manages show offices, computers and social media. Carol says he got into computers really early. Growing up with horses, he dreamed of being an Olympic rider, but that didn’t work out. He lives in Charleston, South Carolina, but is rarely there.

Jewelry may be the first thing off people’s shopping lists when the economy gets bad. Carol says Windsor Gallery survived poor times in the economy thanks to Jim’s creativity.

“Through the first recession, we were doing casting. Kirsten started with us in high school. She learned to cast – forming the mold into the finished product. We made molds of things we could make. We took the molds around to pawnshops and made new products. We cut their costs; they got new products with the gold they already had. That was a big lifesaver. “

“It’s not really an invention – they were already out there – but he created the miniaturization of the product so people could use it at home. He builds the cleaners in the basement.

“He built them too well,” she says with a laugh. “Once we sell one to someone, they never need another one.”

“In the last recession, we bought and sold gold. We made a little percentage.”

She smiles again. “And that’s how we’ve survived the economy.”

Windsor Gallery is meticulous in documenting pieces brought in for repair. Every piece that comes in is photographed. They inspect the piece for damage and document the condition.

Carol says there are a few simple steps people can take to extend the life of their jewelry:

• Don’t wear jewelry in the pool or hot tubs. Chlorine damages the alloys that hold the gold together and the alloys in settings.

• Have jewelry inspected and cleaned annually. People have lost stones because they didn’t get prongs checked. Clasps on necklaces can wear out or the connectors for clasps. When they fail, an object on the necklace can be lost.

“I just love the feel of metal,” she says. “When you polish silver well, it’s so smooth and feels like a baby’s skin. After a while, you can feel the difference between 10-, 14- and 18-karat gold with your hands. The higher grades get a somewhat oily feel – really slick.”

She’s self-effacing about her sales skills.

“I’m not a natural sales person. I couldn’t talk someone into buying something. I’m just not that way. If they want something, I am happy to sell it to them, but I can’t talk them into it.

She is thankful, she says, for Windsor’s loyal customers.

“The hardest thing is to lose good customers. People find the internet or try other places – or pass away.”

Reynolds says her mom has a way with people.

Carol laughs again. “Yes, they come in and ask for that older lady.”

“Because Mom didn’t come from a marketing or retail environment, she’s not aggressive,” Reynolds says. “She has great character. The nature in many jewelry stores is to sort of push people into buying things. It’s a very competitive market across the nation, and we don’t buy into that. We just like to be welcoming.”

Carol thinks her manner with people comes from having been a teacher.

“I try to see the inside of people. I try to connect spirit to spirit. That’s the way I feel. That’s something that’s ongoing.”

She pauses a moment and gets a little embarrassed at being deep.

“I know it sounds crazy.”

Because Carol’s a thinker, she can be a little deliberate in her repairs.

“See that chandelier over there? The owner made the mistake of saying he wasn’t in a hurry to get it back. I’m still thinking over how I’m going to approach it.”

After 35 years, one wonders when Carol woke up and realized she had actually mastered the jewelry business. She and Kirsten look at each other and have a good laugh.

“We’re still working on it.”