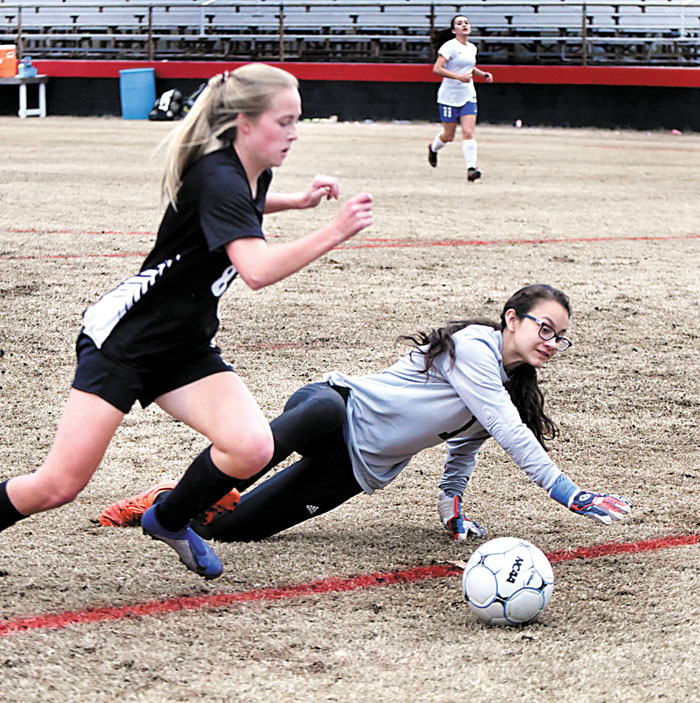 SALISBURY — This is not, coach Matt Parrish warns, the same Salisbury girls soccer team we saw a year ago.

Gone are the likes of Honeycutt, Mann, Cardelle and Obermueller — players who helped the Hornets win their first 25 matches last spring before falling in the 2A state semifinals. This team, it seems, is searching for its own place in history.

“I’ve been trying to reiterate this to the girls,” Parrish said Monday night, moments after Salisbury routed visiting Lexington, 6-0. “This is not last year’s team. We’re not going to walk on the field and blow the doors off of anybody. We have to be solid from the first whistle to the last whistle.”

Against that backdrop, the Hornets (4-0, 3-0 CCC) have hit the ground running. They’ve scored 25 goals and allowed none — and had little trouble imposing their will on Lexington (1-4, 0-3), netting five first-half goals within a feverish, 19-minute span.

“We have to come out strong,” sophomore Lillie Rusher said. “We don’t know what these other teams are like, so we can’t hold anything back.”

Lexington, a squad with 16 underclassmen on its 20-girl roster, was ill-prepared to handle Salisbury’s damn-the-torpedoes assault. The Hornets fired 19 shots on goal and converted two of their first three attempts — a header by Piper Muire just 3:34 into the match and a redirection off the foot of Ellen Simons two minutes later.

“It’s beginning to develop,” said Simons, one of four Salisbury seniors. “You know, that connection with each other. Knowing where to pass it and who likes it where, that stuff. We’re learning positioning.”

Rusher and Muire seem to have that part down pat. They duplicated their opening-goal sequence on Salisbury’s third tally — with the strong-footed Rusher serving a corner kick into Muire’s wheelhouse for a bang-bang goal in the game’s 14th minute.

“Their set pieces just killed us,” said Lexington coach Sierra Hutchins, a three-time all-conference defender for West Davidson from 2010-12. “But then, they’ve always been good at those.”

Muire, a sophomore midfielder with a Maserati engine, actually knocked the ball past Lexington keeper Eva Salmeron with her belly.

“It was just an important goal,” she said. “A third score can sometimes put a game away. We already had a lot of momentum from the first two, but at that point we were trying to get as many as we could.”

They got two more before halftime. Sutton Webb, the freshman forward who has scored in each Salisbury match, potted her seventh goal of the season when she beat Salmeron with a high, hard one at 16:21. Rusher made it 5-0 when she curled a corner kick from the left corner into the far right side of the net with 17:29 remaining in the half.

“Most of the time, I just look for Piper on corners,” Rusher said. “That time I saw her back away from the ball and it just curved itself in there.”

Parrish, now in his 15th season on the SHS sideline, was pleased to see five goals bunched together.

“That’s another thing that’s incredibly hard to teach to a young team,” he said. “And I am terrible at it. I have not found a magic formula or inspirational words yet — to find a way to get the girls, once they have the contest in hand, for them to take the next step and end it.”

That had to wait until Simons scored her second of the night by tucking a rebound past Salmeron with 12:02 remaining. Salisbury keeper Caroline Clark secured the shutout by making three saves, including a highlight-reel stop on a wicked liner by Lexington’s Alaina Rivera late in the match.

“Big time save,” Parrish gushed. “And it happened in a perfect scenario. It happened with a lead. It happened at home. It happened against the best striker on their team. That’s one heck of a confidence-booster.”

So was the outcome. Perhaps Hutchins provided the most telling statement when she offered: “I think we played a really good, overall match — considering who we were playing.”

NOTES: Salisbury’s Clara Brown, a starting left back, sat out the game with an eye injury suffered March 6 against Thomasville. … Lexington managed only three shots-on-goal. Salmeron, a freshman, made 12 saves. … The Hornets visit conference foe Central Davidson at 7 p.m. Wednesday and host North Rowan in a non-leaguer Thursday night at 6.