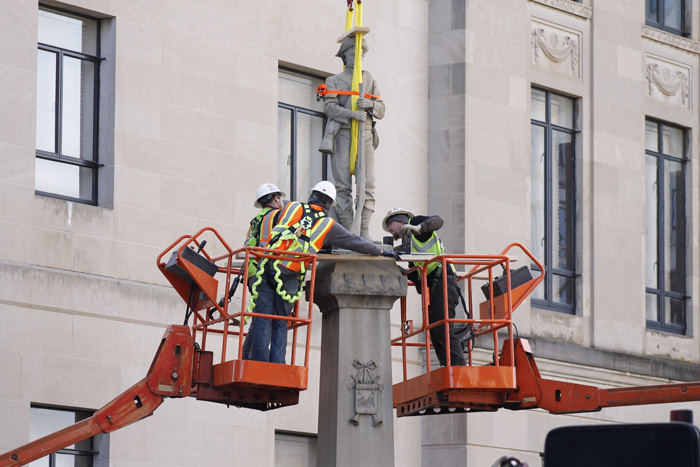 Workers take the final steps before removing a Confederate statue from its location in downtown Winston-Salem, North Carolina, on Tuesday, March 12, 2019. The action is considered a rare move since such monuments are largely protected by law. (AP Photo/Skip Foreman)

WINSTON-SALEM — Winston-Salem removed a Confederate statue Tuesday from the grounds of an old courthouse, drawing applause from onlookers for the rare move in a state where such monuments are largely protected by law.

Construction crews spent more than an hour attaching a harness and a cage-like metal frame to the statue of an anonymous soldier, then hoisted it from atop its pedestal with a large crane. A small group of people watching clapped and cheered as the statue was taken down and placed on a flatbed truck. The column and base were then dismantled and removed piece by piece, with workers finishing up in the afternoon.

Winston-Salem Mayor Allen Joines said the statue will temporarily be put in storage before it’s eventually moved to historic Salem Cemetery. He said he didn’t have an estimate for the cost of the city-funded removal.

“We realize that there are very strong feelings on both sides of this issue, so what we’ve tried to do is devise a solution that recognizes both sides,” Joines said in an interview, describing the cemetery as “a very dignified and appropriate location for the statue.”

Wearing a cap and jacket with Confederate emblems, Howard Snow watched the workers’ progress throughout the morning, occasionally snapping pictures with his cellphone from a sidewalk. He said the removal was a waste of taxpayer money and an overall “travesty.”

But Chris Lutz, who blew on a vuvuzela horn as the statue came down, said he is pleased the city made good on weeks of planning to relocate the statue. Protesters have decried the statue and other Confederate monuments as racist symbols.

“I’m excited that it’s down,” said Lutz, 27. “I thought it was going to be much longer, much more arduous.”

Winston-Salem had more leeway than most North Carolina cities because the old courthouse property has passed into private hands. A 2015 North Carolina law all but prohibits the permanent removal of Confederate statues from public land. More than 90 Confederate monuments stand in public places other than cemeteries across the state.

In January, a judge denied a request by the United Daughters of the Confederacy to prevent the removal of the Winston-Salem statue from the grounds of the building that now houses apartments.

The nearly 30-foot-high monument includes a granite statue atop a base and column and was dedicated in 1905. It depicts an anonymous soldier in a Confederate uniform resting his rifle stock against the ground.

The United Daughters of the Confederacy unsuccessfully argued in court papers that the sale of the Winston-Salem courthouse left the public monuments in the hands of Forsyth County, so removal would violate the state law. But county officials have said they don’t own the statue and the current owner of the property agreed the statue should be removed.

City officials have said it’s impossible to preserve the monument or protect public safety at the downtown location. The statue has been vandalized several times in recent years, and critics and supporters have rallied around it.

Elsewhere, two Confederate statues in the state have been torn down by protesters in recent years, including one at a historic Durham courthouse and another on the campus of the University of North Carolina at Chapel Hill.

Those are among at least 18 Confederate monuments across the state that have been vandalized or damaged dating back decades, including one knocked over by a 1989 hurricane and later put back up, according to an Associated Press analysis of state records.

Before the 2015 monuments law was enacted, North Carolina municipalities had relocated Confederate monuments at least 20 times, including some moved multiple times.

Local governments have been all but blocked from moving statues under the law that allows relocation only in very narrow circumstances. Among the last monuments moved by a local government before Tuesday was one relocated from near Charlotte’s old City Hall to a cemetery after it was vandalized in 2015.

The Southern Poverty Law Center said 115 Confederate statues have been taken down across the U.S., a sign that they are losing favor.

General Assembly considers ban on hand-held phone use while…