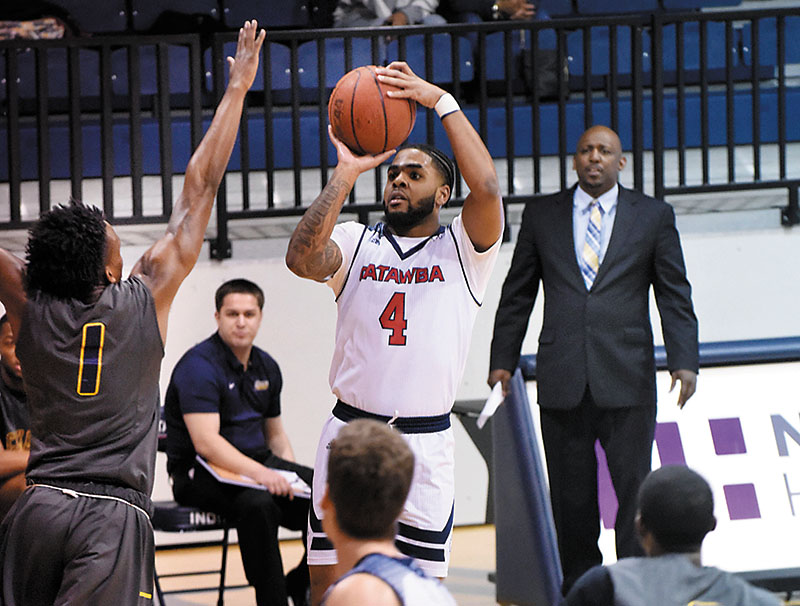 Cooper, a 21-year-old point guard who has had two basketball seasons abruptly ended by knee injuries, finally was in the right place at the right time on Sunday. He was named MVP of the South Atlantic Conference Tournament after Catawba beat Lenoir-Rhyne 71-67 in a tense championship game.

It was the first conference tournament title for the Indians in a decade. Playing in Hickory under coach Jim Baker and with players such as Antonio Houston and Rob Fields, they edged Tusculum for the crown in 2009.

“This was an exciting day and it’s an honor to be MVP,” Cooper said. “But the important thing is we won a championship. Ten years from now no one will remember I was MVP, but this team always will be remembered by a banner in the gym.”

Cooper scored a modest 12 points in Sunday’s championship game at Timmons Arena on the campus of Furman University, but four of them couldn’t have been any larger. He stepped to the foul line twice in the last 27 seconds, with the game hanging on every free throw, and calmly knocked down four in a row.

Cooper is Catawba’s deadliest free-throw shooter, right at 90 percent, so head coach Rob Perron is thrilled every time he gets to take foul shots at the end of ballgames.

“You just have to step up there and be confident, and my biggest part of the win today was being able to make free throws,” Cooper said. “I wanted this championship for the seniors on this team. I wasn’t going to miss.”

As a senior at Charlotte’s Ardrey Kell High in 2015, Cooper suffered a torn ACL in the second round of the 4A state playoffs. Ardrey Kell still made it to the state championship game, but AK missed his 15 points per game and lost to Garner.

Cooper moved on to Division I Radford University in Virginia, paid some dues as a true freshman, but then earned a starting spot as a sophomore. When Radford’s 2016-17 season began at Wake Forest, Cooper was in the starting lineup and scored seven points against the Demon Deacons at Joel Coliseum. He was looking forward to playing against UNC in the Smith Center in early December, but his season was over before he got to Chapel Hill. It ended on Nov. 22 at Mercer, in Radford’s fourth game. He suffered another major knee injury.

Cooper received a medical redshirt for that lost season and returned to the Radford roster for the 2017-18 campaign, but he didn’t get to play much. The highlight of that season was appearing on the court briefly in Radford’s win against LIU Brooklyn in a March Madness NCAA Tournament “First Four” game and playing a minute when Villanova, a No. 1 seed, ended Radford’s season on March 16, 2018, in Pittsburgh.

Last June, Radford announced Cooper was leaving the program for Catawba. He arrived at Catawba with two years of eligibility.

He’s been buddies with Catawba’s Malik Constantine since they were 14 years old. They were AAU teammates on Team Charlotte growing up. Their families are tight.

“My friendship with Malik was a factor in me transferring to Catawba, actually one of the biggest factors,” Cooper said. “It was also a lot closer to home and it would be easier for friends and family to travel to watch me play. The goal has always been to win championships. Championships are championships, whether it’s Division I or Division II.”

He helped collect some championship hardware for Catawba on Sunday. He handled the ball a lot and played 35 turnover-free minutes. He got lots of help from Jordan MeElveen (13 points), Daquan Lilly (13) and Marcell Haskett (10). Haskett didn’t get hot like he often does, but he joined Cooper on the all-tournament team.

If you’d told Perron before the game that Catawba (24-7) could win without Jameel Taylor making a single field goal, he wouldn’t have believed it, but that’s what happened. A foul-plagued Taylor contributed only two free throws offensively, but the SAC’s defensive player of the year came through at the end. He blocked a 3-point attempt by the L-R Bears (21-10) with three seconds left that could’ve tied the game.

The Bears started strong and led 9-3.

Catawba finally moved in front midway through the first half, 17-16, after Constantine converted a layup and a jumper back-to-back.

At halftime, the Indians led 31-28. They were in front despite shooting 37.9 percent from the field and only 4-for-14 from the 3-point line.

“It’s not like we played a great game,” Perron said. “But we did play really hard. We rebounded well and we took care of the ball.”

Catawba stayed in control the first 12 minutes of the second half, but the Bears tied it at 50-all on R.J. Gunn’s layup with  8:28 remaining.

Lilly, a powerfully built post man, stepped outside to knock down a pivotal 3-pointer for a 58-55 lead with 6:27 left. Constantine made the pass.

After a bucket by Haskett, two free throws by Constantine and one by Haskett, Catawba shoved its lead back to 63-55 with 4:38 remaining.

At the 3:46 mark, L-R got a 3-pointer from all-tournament pick Cory Thomas. Then L-R’s other all-tournament choice, 6-foot-8 Bertrand Awana, blocked a shot by Lilly on one end and made a layup on the other to cut the Indians’ lead to 63-60 with 3:25 left.

“We knew it would be a battle,” Cooper said. “Lenoir-Rhyne is a very good team. They were going to make some runs. But we talk a lot about staying the course, and that’s what we did. Once we got the lead back, we held it.”

Lilly missed from outside with 1:24 left, but that’s when the 6-4 McElveen got the game’s biggest rebound. His stick-back with 1:19 remaining stopped L-R’s 7-0 run.

L-R rushed up the floor and attacked. Jean’s three-point play with 20 seconds left, made it 67-66.

With 18 seconds left, Cooper made two more free throws to give the Indians a three-point lead.

Taylor then blocked a 3-point try by the Bears. Jean claimed the rebound and was fouled with only three seconds left. He made his first free throw to cut L-R’s deficit to two. He missed the second free throw on purpose, but the Bears couldn’t corral the offensive board.

Then McElveen made two game-sealing free throws for the final margin.

“You won’t win many championship games shooting 36 percent, but we rebounded strong and got a lot of second-chance points,” Perron said. “A big part of the game plan was driving and forcing their big man (Awana) to help. That gave us a lot of rebounding opportunities on the back side.”

Catawba bludgeoned the Bears on the glass, 42-31, with a 19-7 edge as far as offensive boards.

Catawba’s 13-5 edge in the turnover battle was very helpful.

And the Indians are deeper. L-R’s bench contributed two points. Catawba got 28 points off the bench from Lilly, Constantine and Terrence Whitfield. Ben Zemonek didn’t score, but made some plays.

“There were a feeling all tournament long of getting this one for our seniors,” said Perron, who was doused with a traditional liquid bath in a post-game celebration. “There have been a lot of sweat and tears with this group, so this game wasn’t about improving our seed for the regional or anything like that. Today was all about winning a championship.”

The Indians stayed the course. The guy who led the way was Cooper.

“There’s been a lot of adversity,” Cooper said. “I’ve been through a lot to get to today.”

NOTES: Catawba received the No. 4 seed for the Southeast Regional that will be hosted by No. 1 seed Queens. L-R also made the regional, as expected, and is seeded sixth. Regional play starts on Saturday, March 16.