Women in service: ‘We should know these stories — and know them well’ 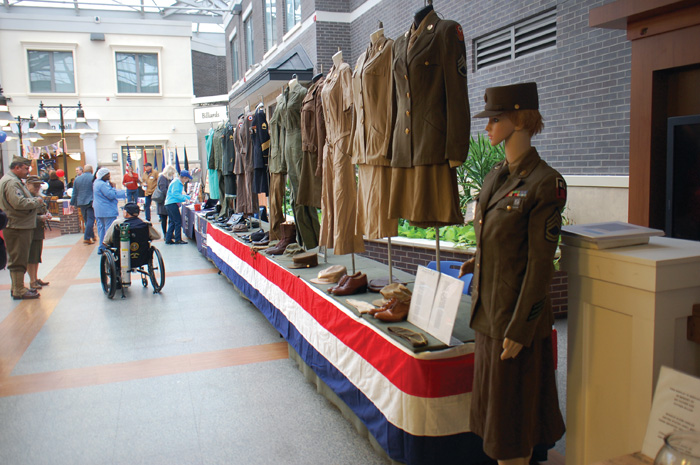 Mark Wineka/Salisbury Post For the 'Salute to Women in Service' program at the VA Medical Center Saturday, Sandy and Brian Sharp of Harlem, Georgia, brought 15 examples of women's military uniforms, from 1942 to 1975. The 1942 Women's Army Corps uniform on the mannequin belonged to Marcia E. York, who joined the WAC at Fort Des Moines, Iowa, in 1942.

SALISBURY — Women in the military, especially the trailblazers, faced all kinds of obstacles in a male-dominated culture and from a society at large that just didn’t get it.

A “Salute to Women in Service” program held Saturday afternoon at the Hefner VA Medical Center celebrated women veterans who have fought and served the country in all military branches.

VA Medical Center Director Joe Vaughn said it was the first time a specific salute to women was held at the hospital.

“I have to say, in my opinion, it’s long overdue,” said Vaughn, who hopes to make this event an annual thing.

Salute to Women in Service was held in conjunction with the ongoing 49 Days of Gratitude celebration in Rowan County,

Vaughn mentioned three women’s names with military connections who should be as familiar to Americans as Audie Murphy, Alvin York or Dwight Eisenhower — but they aren’t.

In the Revolutionary War, Deborah Sampson disguised herself as a man so she could serve in the Continental Army. Cathay Williams also portrayed a man in the Civil War and became a Buffalo Soldier.

U.S. Sen. Tammy Duckworth of Illinois lost both her legs in 2004 when the Blackhawk helicopter she was piloting in Iraq was hit by a missile.

Though last year marked an official 100th anniversary of women in the military, dating back to World War I, women were cooking, mending, nursing and soldiering long before that.

Harriet Tubman was, for example, a spy for Union forces in the Civil War. Other women were key saboteurs in other conflicts.

Women were not authorized to received military benefits as veterans until 1948.

“I loved what I did, and I would do it all over again,” said Sharp, a Harlem, Georgia, resident who brought with her 14 dress uniforms that women wore between 1943 and 1978, when the Women’s Army Corps was officially deactivated.

Linette Baker, associate director of the Hefner VA Medical Center, spent 24 years in the Air Force before retiring as master sergeant and beginning her 16 years with the VA system.

Baker spent her first three years as a dental assistant in the Air Force and interacted mostly with women who also were assistants.

Out of boredom, Baker looked for another job in the Air Force and decided on being a loadmaster, mainly because of the large re-enlistment bonus that came with it.

In the early 1980s, Baker found herself at Survival School with only one other woman.

“I learned a lot there,” she said of tackling what previously had been pretty much an all-male environment. “They really didn’t know what to do with us.”

On her first assignment, she became the only woman in her squadron at Travis Air Force Base, where her chief let her know the squadron had only one other woman before her, “and she did not work out.”

It was not the best of welcomes. That same chief tested her in ways he never did with men, but Baker passed those tests, doing everything physically expected of her male counterparts.

Through her career, she kept noticing the slights. When the composition of her crew was described, it usually was “four crew members and a woman,” not simply “five crew members.”

But Baker stressed how much she loved the Air Force and how much things have changed for women in service for the better.

“I would have stayed forever, if I could have,” she said.

Another guest speaker Saturday was Beth Ann Koelsch, curator of the Betty H. Carter Women Veterans Project at the University of North Carolina at Greensboro.

Since its beginnings in 1998, the project has recorded some 430 oral histories and collected photographs, diaries, letters, scrapbooks, military manuals, uniforms, recruiting posters and books related to women who served.

The project also has tried to digitize as much of the artifacts as possible, while making full text transcripts of the oral histories available.

Koelsch shared several examples of women from this area who are part of the histories, including Annie Sherrill Pozyck of Concord who served as both a a nurse on a hospital ship and as a nurse in a field hospital in the Philippines during World War II.

Before her own enlistment, she had met a Massachusetts man who was training in Concord as part of the New England National Guard. They married in Charleston, S.C., before he was deployed to Europe and prior to her own enlistment in the Navy Women’s Corps.

Her husband was captured by the Germans during the Battle of the Bulge, and he was a prisoner of war for six months before the Allied victory. The couple were reunited in November 1945 after Annie’s service commitment was over.

Koelsch encouraged any of the women veterans attending Saturday’s program to check out the UNCG project or even think about participating through an oral history.

The 15 women veterans who were part of the audience Saturday posed in front of a special cake prepared for the event and receive a bag of gifts before they left.

The day also included a display and information from Vet Girls Rock, plus details of what women are offered at the VA Medical Center.