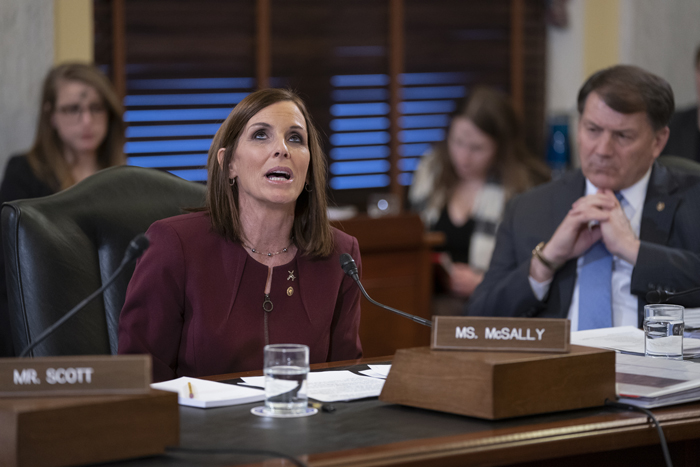 During a hearing by the Senate Armed Services Subcommittee on Personnel about prevention and response to sexual assault in the military, Sen. Martha McSally, R-Ariz., recounts her own experience with sexual assault while serving as a colonel in the Air Force on Wednesday. J. Scott Applewhite/Associated Press

WASHINGTON — Upon disclosing that she was raped by a superior while in the Air Force, Sen. Martha McSally became a powerful force in the debate over military sexual assault. She also staked out a position that has divided lawmakers in the past: namely, that such cases should continue to be handled within the military’s chain of command.

McSally’s argument to keep decision-making about sexual assault cases under the command structure came minutes after the retired A-10 pilot said she was raped by a superior during a Senate hearing and said that the reason she didn’t report the assault was because she didn’t trust the system.

“I very strongly believe that the commander must not be removed from the decision-making responsibility of preventing, detecting and prosecuting military sexual assault,” said McSally, R-Ariz.

The military justice system gives the commanders, rather than outside prosecutors, the power to decide how and whether to pursue a criminal case regarding sexual assault. Critics of that setup, including Sen. Kirsten Gillibrand, D-N.Y., say victims don’t trust the chain of command to deliver justice and often fear retaliation or bias.

Gillibrand and others argue that independent, trained military prosecutors should make those decisions, rather than top officers trained primarily for other duties.

“When we’ve asked service members, ‘What would you do, what would make you actually report?’ overwhelmingly they have answered, ‘If you took it out of the chain of command.’ Because they’re not reporting,” Gillibrand said in Wednesday’s hearing.

She said the perpetrator is a member of the chain of command in many cases.

Previous attempts by Gillibrand to change that system were met with opposition from members of her own party, including former Sen. Claire McCaskill, D-Mo., who argued that removing responsibility from the chain of command would be a “recipe for disaster” and would risk reducing prosecutions.

While Gillibrand intends to reintroduce her legislation, McSally showed signs Wednesday that she would take up McCaskill’s cause. McSally argued that the military should educate commanders who want to do the right thing but are naive about sexual assault, and she said the military should ensure that commanders are trained and empowered to take legal action, prosecute fairly and rid perpetrators from the ranks.

“I share the disgust of the failures of the military system and many commanders who failed in their responsibilities,” McSally said. “But it is for this very reason that we must allow — we must demand — that commanders stay at the center of the solution and live up to the moral and legal responsibilities that come with being a commander.”

Sen. Joni Ernst, R-Iowa, a retired lieutenant colonel in the Iowa Army National Guard who recently disclosed that she was raped while in college, backed McSally’s position on keeping the handling of sexual assault cases within the chain of command.

“Because there are actions that can be taken by commanders that if they don’t have the necessary evidence to actually charge a soldier with sexual assault, there are still other things they can do,” Ernst said. “If you’re running it outside the chain of command, there are a lot of prosecutors that would simply say, ‘I don’t have the evidence; I’m not going to prosecute.’

“As a commander, I would’ve loved the fact that I can take other actions even if I can’t convict the soldier of a sex crime, I can still do, if there are other related issues, I can still punish them for that through” the Uniform Code of Military Justice, Ernst said.

Sen. Tammy Duckworth, D-Ill., a former helicopter pilot and retired lieutenant colonel in the Illinois Army National Guard, said all felony violent crimes should remain under the chain of command, except for sexual crimes, because the force has shown it is incapable of dealing with military sexual trauma.

“The data shows the military just has not been able to resolve the situation on its own,” Duckworth said. “There’s not similar data when it comes to the other crimes.”

“I think that victims need to be protected first and foremost and their cases must be taken seriously, so taking it out of the chain of command, I think will help us do that,” Duckworth said.

McSally, who declined to be interviewed for this article, hasn’t revealed the identity of her attacker. A spokeswoman for McSally declined to offer additional details about the assault or say whether the alleged assailant is still serving in the military.

According to retired Col. Don Christensen — former chief prosecutor for the Air Force and president of Protect Our Defenders, a military sexual assault prevention organization — there would be no statute of limitations if the assault took place after a 2006 law came into effect. A top military court, he said, implemented a five-year statute of limitations on crimes committed before that law.

Air Force investigators would have an obligation at least to contact McSally because they are required to probe any allegations of sexual assault that surface within the service, Christensen said.

McSally, one of the Air Force’s most decorated and well-known female officers, says she almost left the service when she attempted to share her experiences with others after the assault. She was the first female fighter pilot to fly in combat and the first to command a fighter squadron in combat.

“Martha McSally was well-known,” Christensen said. “She was a trailblazer. She was a maverick. She was a badass. And this happened to her. And she was facing all these issues. So imagine what a young junior enlisted officer is looking at.”

The Pentagon recorded 6,769 sexual assaults in the military in the fiscal year ending Sept. 30, 2017, the most recent year for which figures are available.

To address crimes in its ranks, the military has instituted a number of changes in recent years, many of them initiated by Congress. The military has given sexual assault victims more rights during the pretrial process, extended protections over mental health records, provided special victims counsel to those who have experienced an assault and has taken away the power from senior commanders to overturn convictions, according to Christensen.

Lawmakers agreed that the Pentagon still has a long way to go and said McSally’s decision to come forward with her story would help drive progress.

“We need to make sure we’re empowering women to come forward,” Ernst said. “With Martha speaking out, I think a lot of women and men that have been assaulted, they don’t feel like they can come forward, and we need … that empowerment.”